Hail To The Chief 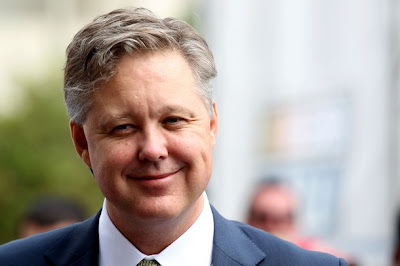 Lots of fans emailed and tweeted about the media interview that Brian France gave in Homestead. In this wide-ranging discussion, France took questions on lots of topics. Some of them concerned television and online media. That is our focus today.

His opening remarks before the question and answer period directly addressed the ratings struggles of the Sprint Cup Series on TV.

Here are his words on that subject:

Obviously we would like our TV ratings on an upswing, and when they are not, we are working on all kinds of things to look and see what is a better formula for us. Clearly we moved start times back, to accommodate our race fans at the at-track experience. We did that. We also did that to uniform start times between the East Coast and the Midwest and the West Coast.

We took ourselves out of some more homes by doing that; also by switching networks on ABC to ESPN. So we did some things to try to help in one area that might have had an effect in another. So we'll be looking at all of those things in the off-season.

Once the questions began, this was posed to France about TV:

Earlier you mentioned wanting to grow the audience and expose NASCAR to as wide an audience as possible. With that in mind, why does the move from ABC to ESPN where you go down some homes, why does that make sense for the sport going forwards? And are you comfortable with having it on ESPN next year, and as you look to reach younger fans, is there a way to get more of the races online or things like that?

This was his answer:

Well, we are having a lot of success with some of our digital efforts. So that being one.

ESPN is our partner and they have been an enormously good partner, and they actually have a younger demo on ESPN network than does their sister network, ABC.

But obviously, so you know, we are going to look with everybody at ESPN to make sure that we have the right times, the right promotion, the right everything, that puts the sport in the best possible position to have had the biggest audience. Our interests are completely aligned in that.

And I suspect we'll sit down in the off-season and talk about that and we are going to share everything with them and they have been a great partner. By the way, I think the broadcast has been as good as I've seen in a long time. I think the energy level and the calling of the action, the on-air talent, I think is top-notch right now on their network, and they have been working at that for a few years to get all of the things just right, and I think they have.

Click here to read Jeff Gluck of SBNation's blog posted immediately after France concluded his remarks. Gluck works the NASCAR trail full time and his impression of the NASCAR Chairman was interesting. Here is an excerpt:

What stunned me was that France – who has tried to be more engaged than ever by holding "town hall" meetings with drivers and follows the results of a 12,000-member Fan Council – seemed to have no clue what many fans think.

France also went out of his way to effusively praise ESPN – the network that has riled a vocal group of fans who believe it makes races unwatchable with excessive commercials and difficult-to-follow action.

France isn't in a position to bash NASCAR's TV partners, of course, but being so complimentary seemed like a slap in the face to fans who are begging for more watchable broadcasts.

Again, while I only agree with part of the anti-ESPN crowd (the part concerning far too many commercials), you'd think France would at least be aware there's a decent number of people who want to feel like they're being heard on the topic.

Like so many others, Gluck misses the point when he used the term "Anti-ESPN crowd." There simply is no such thing. NASCAR has many television partners and all of them produce content of one kind or another. Each of those events, programs or series elicits opinion.

While FOX and TNT had some bumps in the road this season, the focus at this time of the year is clearly on ESPN and rightfully so. They paid the big dollars to get the final seventeen Sprint Cup Series events of the year, including the ten Chase races.

After a crisis meeting with NASCAR several weeks ago in Charlotte that included ESPN President George Bodenheimer to address the TV issues, absolutely nothing changed. The final three races of the season were a confusing mess of uninformed announcers, disjointed pictures and far too many on-air voices wanting to be heard.

Fans of Joey Logano and Juan Montoya could only stare at the TV as ESPN chose to ignore the Homestead incident that took them both out of the race and the confrontations that followed. During the race Twitter, scanners, and chatrooms offered key information that was available to the public. On the track cars hit the wall, front-running teams pitted and drivers reported debris that brought out cautions. None of this made the telecast.

Instead, four lines of graphics stayed on the TV screen for the entire race. It was the ultimate electronic crutch for a production team that had long since thrown in the towel. Read the ticker to see where your driver is running. Check the Championship points on every single lap. Look down for the scores from other sports.

At the end of the race, with the title on the line, this was the quote from ESPN's Marty Reid that will be heard every time the video is replayed:

That hammering you hear is the sound of the nail in the final coffin on the chase contenders hopes of upsetting Jimmie Johnson.

Reid's poorly chosen words may come to summarize the ESPN efforts down the stretch. Despite France's comments to the contrary, the 2010 Chase for the Championship was the worst-produced ESPN coverage of a major professional sport in decades.

Finally, in reference to France's remarks about the digital agenda, he has presided over an organization that has never made practice, qualifying or races available online. Internet partner Turner Sports recently forced the issue by streaming ESPN's Homestead coverage at NASCAR.com for free to anyone. It seems they have had enough.

On the radio side, the Sirius NASCAR channel 128 has never been available online. Original content produced every day is simply delivered to a small group either in their vehicles or capable of downlinking a satellite signal. Instead of solving the distribution problem, the sanctioning body instead concentrated on focusing the Sirius message on positive aspects of the sport and the dismissal of all other viewpoints as anti-NASCAR.

If this is what France means as his digital agenda it is sorely lacking. Without online streaming of all NASCAR television programs, Internet and cell phone access to Sirius 128 and a full time "Race Buddy" style offering for every Sprint Cup Series event in 2011, the technology wave will have left this sport in the dust.

When times get tough, all eyes turn to the top. After this past weekend, the spotlight is on only one man who needs to announce substantive changes across the board in almost every aspect of the sport. That's what comes with being the NASCAR Chairman. Hail to the chief.