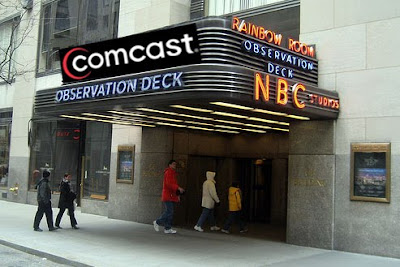 Here are some items crossing the TDP desk this week:

SPEED was rewarded for producing the Nationwide Series race from Richmond with its biggest Friday primetime rating since February. The race attracted about one million viewers and a 1.08 rating. This number is up 6% from 2010.

Meanwhile, FOX did not have the same luck. This from SportsMediaWatch.com:

Saturday's NASCAR race on FOX could only match last year's near-record low in the metered markets. FOX earned a 3.4 overnight rating for Saturday's Matthew and Daniel Hansen 400, flat compared to the same race last year (3.4), and down 8% from 2009 (3.7). This marks the lowest overnight for NASCAR's spring Richmond race since the event moved to FOX in 2007.

Saturday's race ranks as the lowest rated of the season in the metered markets. In addition, the 3.4 is tied as the second-lowest overnight ever for a NASCAR race on FOX, ahead of only the 2009 Subway Fresh Fit 500 (3.3).

The controversial Captain Thunder website run from Daytona, FL is also in the news. After it reported a possible crew chief switch between the Denny Hamlin and Kyle Busch teams last week, the mainstream media chased the story in Richmond. Nate Ryan from USA Today said on the Speedfreaks radio show that the media played a role in hyping this story because they chased it without any kind of confirmation or credible source.

Tuesday on ESPN2's NASCAR Now, JGR president JD Gibbs said the entire story was fake and expressed concern that anyone would take Captain Thunder seriously. Gibbs was clearly not amused. Captain Thunder is part of the YardBarker network, a company owned by FOX Sports Interactive Media.

Also crossing the wires was the announcement that ESPN and FOX have chosen to split a big college sports package. The Pac-12 conference will get $250 million annually for the next 12 years from those two networks to split marquee events like football and basketball games. An entire package of other sports is also included.

This commitment comes at a time when NASCAR is beginning to work on renewing the current TV contract that expires in 2014. Normally, the new deal would be in place and announced early in 2013. ESPN and FOX certainly seem to be pointing more and more toward college product.

The new player on the horizon in motorsports is Comcast/NBC. Fueled by the same duel revenue stream that powered ESPN to become the leader in TV sports, the new company features broadcast network access in NBC, cable access in VERSUS and ancillary outlets like CNBC and MSNBC. Both those networks have been used for weekend sports access in the past by previous owners.

Comcast executives have already said that VERSUS will be rebranded with some NBC identification within the month. CSNBC and NBC Sports Net are the two favorite rumors. Whatever the name, it seems clear that there is a new shark in the NASCAR pond.

The Sports Emmy awards have been presented and NASCAR was involved in two. Jimmie Johnson: The Road to Daytona was part of the 24/7 documentary series on HBO. That project picked-up the award for Outstanding Editing. NASCAR on FOX won for live event outstanding audio. Guess those "Crank it Up" segments worked after all.

Finally, click here for a link to a story on NASCAR.com that recaps the changes Brian France is making as the sport gets ready for the most crucial round of TV and media negotiations in its history. Paul Brooks and new NASCAR VP of Broadcasting Steve Herbst look to be the two guys on the TV hotseat.

We welcome your comments on these topics. To add your opinion, just click on the comments button below. This is a family-friendly website, please keep that in mind when posting. Thanks for taking the time to stop by The Daly Planet. 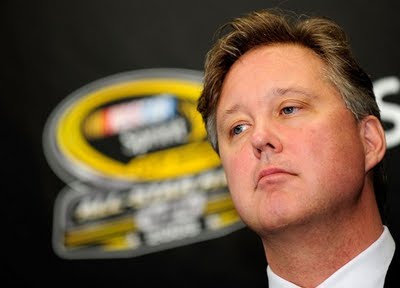 NASCAR Chairman Brian France was in Bristol, CT at the ESPN campus on Monday for what was termed business reasons. He took the time to appear on two TV programs during the day. First on ESPN's SportsCenter at 10AM and then on ESPN2's NASCAR Now in the late afternoon.

It was SportsCenter anchor Kevin Negandhi who conducted the first interview. While most of ESPN anchors are not well-versed in NASCAR, Negandhi was solid with his questions. Negandhi was recently tapped to join Hannah Storm as the SportsCenter morning version co-host, replacing Josh Elliott who moved to ABC's Good Morning America. So, France was speaking with the big dog on the set.

France offered that the Sprint Cup Series season had gotten off to a good start with the Trevor Bayne upset that combined a young driver with a veteran team like the Wood Brothers. France made the point that rules had changed this season to reward winning and brought-up the new wild card entries for the Chase.

When Negandhi asked about the resurgence of Dale Earnhardt Jr. the response was interesting. "He’s the biggest franchise in NASCAR," said France. "It would be great if he continues to figure out the chemistry of the team. I think his confidence is finally back to where it was a few years ago. He went through a pretty good slump, so it’s nice to see him competing at a high level."

This SportsCenter interview repeated during the day while France moved on to Allen Bestwick and his NASCAR Now Monday roundtable show. This program is one-hour long and features Bestwick and his "expert panel" reviewing races and talking about various NASCAR topics.

This week, NASCAR Now Lead Reporter Marty Smith, NASCAR analyst Ricky Craven and ESPN.com writer Ed Hinton were the panelists. It was an interesting combination of personalities that made for some memorable questions and answers as France joined the program for the final thirty minutes of the show.

France repeated his points about Dale Junior, Trevor Bayne and the new wild card for the Chase. Smith asked the first question and brought up the current labor strife in the NFL and NBA. He used the word "dictatorial" in describing the difference in NASCAR's management as compared to other pro sports leagues. France was not amused.

"I wouldn't call it dictatorial," France responded. "We obviously like the business model of the sport because we can get new team owners and new drivers over time into the sport. That is the key to having the best competition."

Craven followed by asking a question many fans have raised. Will NASCAR do anything special if the NFL is on strike come September? "No, we are not planning on that," said France. "It is out of our control and we are also fans of other sports. We will do the normal things we do to build toward our finale down in South Florida to crown our champion."

In discussing the business of the sport, France stressed inclusion of participants who are now called "stakeholders" in the new NASCAR lingo. He made the point that prior to the season he personally met with each Sprint Cup Series team owner and driver to allow them to voice their issues and concerns.

Carefully avoiding using the word vanilla, Smith asked why the traditional NASCAR driver rivalries have gone by the wayside. "I think sometimes it's a function of the obligations the drivers have to their sponsors," said France. "They can't or don't think they can express themselves in the way that everybody would like to see. I hope that changes over time and we are encouraging that."

Bestwick had put the call out on Twitter for fan questions. He reported to France that the number one topic was the two-car draft racing at Daytona and Talladega. Bestwick asked if there was any consideration to making some changes.

"The truth is that while it's different, it's just what we like," France replied. "It's close and competitive with spectacular finishes and record lead changes. It would be hard to us to say that we want any more out of those big speedways."

France agreed after the most recent Jeff Gordon accident that track safety is an ongoing issue. He also reinforced that limiting drivers to one series for championship points is designed to showcase younger drivers whether they win the race or not. France went so far as to say there may be the scenario down the road where NASCAR caps the number of Nationwide and Camping World Truck Series events in which fulltime Sprint Cup Series drivers can participate.

This ESPN media exposure was one of France's best TV appearances in years. The rumpled hair and open collar was replaced by a professional appearance that included a suit and tie. His answers were focused and made sense. That has not always been the case.

While still a tad defensive, France presented himself as a person in charge who was willing to listen and discuss topics not hand-picked by the NASCAR PR staff or screened in advance. There was a lot of racing and reporting experience on the panel and it made for an entertaining show.

Portions of the interview are available on the ESPN.com website under the NASCAR tab. We invite your thoughts on this topic. To add your opinion, just click on the comments button below. This is a family-friendly website, please keep that in mind when posting. Thanks for taking the time to stop by The Daly Planet.