Can ESPN Save The NASCAR Hall Of Fame? 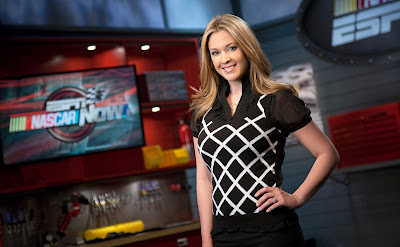 Those of you who have been around a bit may remember the old RPM2Night TV show. What began in a tiny studio near the Carowinds theme park eventually moved into the ESPN Regional Television (ERT) facility in the Ballantyne area of South Charlotte.

Back in 2000, it was ERT General Manager Chuck Gerber who put into words why it was a smart move for ESPN to produce its only motorsports show from Charlotte. "It only makes sense because all of the teams are here," Gerber told Erik Spanberg of the Charlotte Business Journal. "It's a good relationship for everyone." Click here to read the entire article.

In 2011, ESPN2 enters year five of producing the network's only motorsports news program called NASCAR Now. After a terrible start, the on-air and production team have finally hit on a combination that works. An hour on Monday, thirty minutes Tuesday through Friday and a preview show before each Sprint Cup Series race.

When the Chase races come around, ESPN adds a killer Sunday night one-hour show that has all the highlights, information from the track and complete interviews. It's been interesting to watch ESPN take years to sort this series out. Now, it just might be time to take it to the next level.

The current TV contract with ESPN and NASCAR runs through 2014. That means at least four more seasons of NASCAR Now will be produced. It's very possible that with a contract extension this TV series may run for many more years. It's a powerhouse product for NASCAR fans who can't get enough of Allen Bestwick, Ricky Craven and the rest of the gang.

When SPEED decided to get back into the NASCAR news game, they created a series called Race Hub and located it in North Charlotte at the SPEED studios. The idea was that the proximity of the studio and the race teams would make for easy access to drivers and other NASCAR personalities.

This series airs Monday through Thursday and is comprised of same-day interviews, recorded studio guests and features. It has been a welcome addition to the TV landscape, but has not diluted the NASCAR Now franchise in the least.

Ten years after his article on RPM2Night, Erik Spanberg is now the senior staff writer for the Charlotte Business Journal. Click here for his story on the current situation with the NASCAR Hall of Fame.

Needless to say, things are in a funk. The Hall needs something that can regularly attract visitors. It has to be something that out of town guests would remember and tell all of their friends about. Word of mouth is the best advertising. At the same time, North Carolina locals would need something to bring them back for a repeat visit.

Many of us watched the special NASCAR Now shows produced from the Hall of Fame during events like the grand opening, the induction and even the announcement of the inductees. Dr. Jerry Punch is a Hall of Fame voter and he reported for NASCAR Now surrounded by very appreciative fans. Just with that one show, he made a lifetime memory for each and every one of them.

Currently, NASCAR Now is jammed into a corner in the Bristol, CT studios of ESPN2. This fish out of water show takes production resources away from an already overworked facility. While Mike Massaro agreed to move back to Connecticut to co-host the show, both Nicole Briscoe and Allen Bestwick live out of state. There is a whole lot of traveling going on to get this program done each week.

Reporters like Marty Smith, Ryan McGee, David Newton and Shannon Spake all live in the Greater Charlotte area. Briscoe does as well. Add Dale Jarrett, Andy Petree, Rusty Wallace and Punch to that list. You get the point.

Just as Gerber stated back in 2000, where ESPN's coverage of NASCAR is concerned all the teams are in the same place. It only makes sense to originate the daily program covering the sport from where the news is happening. Not to mention the fact that NASCAR has consolidated its own operations in the office complex right next to, you guessed it, the Hall of Fame.

In 2006, I forwarded a letter to ESPN's SVP John Skipper suggesting that ESPN consider originating a NASCAR news show in Charlotte if one was in the works. My response was that ESPN would not spend the money to invest in a High Definition (HD) facility when the Bristol studios were available.

Well, since that time some things have changed. ESPN has acquired an immense amount of new college and pro sports that each require a studio presence. Meanwhile, NMG has a state of the art HD television facility in downtown Charlotte looking for more work. Finally, attached to that facility at no extra charge is the NASCAR Hall of Fame.

With a nice low price from the NMG folks, ESPN could free up studio space and production time back in Bristol to serve the new stick-and-ball sports programming. NASCAR Now could have free run of the Hall of Fame, providing the folks who operate that facility with a unique attraction that would change every single day.

Putting the show out among the exhibits, the fans and the history of the sport would provide a unique backdrop. It would also allow ESPN the daily contact with the sport it has been lacking with the series produced in Connecticut.

NASCAR Now is not slated to return until February. That leaves plenty of time for some good conversation, some good imagination and as the bottom line, some good common sense. Maybe ESPN and NASCAR can actually agree on something that will make both of them better once it's done.

We welcome your thoughts on this topic. To add your opinion, just click on the comments button below. This is a family-friendly website, please keep that in mind when posting. Thanks for taking the time to stop by The Daly Planet.