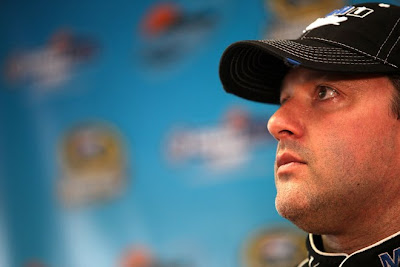 It was just a post-race press conference after the Sprint Cup Series race in Phoenix on Sunday. The second and third place drivers were sitting on a stage with three chairs only feet away from the NASCAR media corps.

The laptops were buzzing as various media members asked questions that they would be including in online stories, radio updates and TV reports. Tony Stewart and Carl Edwards looked tired, but both were very pleased they had continued the championship fight by finishing behind winner Kasey Kahne.

Shannon Spake currently is a utility player for ESPN. She works on NASCAR Now, is a part-time pit reporter and provides NASCAR news for various ESPN outlets like SportsCenter. Her question was different in tone from the previous media inquiries.

Spake: We watch you come in and sit down next to each other after battling on the track. What is it like to sit down and have to talk about your race and the Chase next to the guy you're battling?

Stewart: We've been doing this how long together? I mean, it's no different. Our demeanor isn't any different than we always are.

It's you guys and ESPN that loves to try to build that crap in between everybody. The total drama network, for sure. At least they're consistent about it.

Everybody at ESPN is consistent about it.

I don't see it being any different than normal. If you want, we can eliminate the chair, if that will make you feel better.

Stewart: I think that answers your question, though, doesn't it? Can you make sure everybody at ESPN understands that? Thank you.

While the media session rolled on, one important thing to remember is that all of this was streamed live on NASCAR.com as part of the normal post-race online feed. NASCAR fans on the Internet saw this as it happened.

It was the fall of 2007 when Stewart first clashed with ESPN over a perceived agenda of TV-driven hype and innuendo. His target was then NASCAR Now reporter David Amber, who had absolutely no motorsports experience. Amber tossed a loaded question to Stewart. It did not go well.

"If every time we do an interview you want to stand here and dig-up dirt, you might as well go and find somebody else because we will wait until you leave," said Stewart. "Do we always have to leave with a dagger in our back from ESPN? That's all I'm curious about." Click here to read the original TDP column from 2007.

Over the past few years, ESPN has assembled a solid group of reporters who work for NASCAR Now, ESPN the Magazine and the ESPN.com website. In stark contrast to these veterans, many other ESPN news and anchor personalities have to be literally force-fed NASCAR content.

Inside the live race telecasts, ESPN continues to juggle a complicated agenda. Norby Williamson, the executive in charge of both studio and remote production, emphasizes what he calls "storytelling" in event coverage. That has shifted the focus from catering to the hardcore fan to more of a hunt for stories within the race itself.

In 2008, both Stewart and Dale Earnhardt Jr. spoke out about ESPN's repeated use of a heated radio conversation between Stewart and then crew chief Greg Zipadelli moments after the Richmond Sprint Cup Series race.

What was shown to TV viewers and Internet users was the outburst, but not the apology that was offered minutes later. The video clip was used all over the ESPN TV networks and the ESPN.com website for days after the race.

"I think it's just poor taste by the networks and I'm seeing it too often," said Dale Earnhardt Jr., making reference to multiple problems this season.

"That's ESPN," said Stewart. "We've had a terrible relationship with ESPN for years. We've been very outspoken with them as a company about how they treat the drivers, treat the teams."

"They're a (TV) production team that wants to do everything they can to stir the pot up," continued Stewart. "It's no secret ESPN and I don't get along."

"Do they have a right to air it?" Stewart continued. "Absolutely. Trust me, if there's anything negative I do, ESPN is going to pick up on it and run with it every chance they get."

"That just shows you what's important to them (ESPN). It's not the positive things in the sport. They want to pick up on everything negative they can," said Stewart.

"It's taking it too far where they're putting those type of conversations on network television and it's getting the kind of press it's getting," said Earnhardt. "It looks terrible for Tony. (It was) heat of the moment. You're going to say things you regret and I'm sure he regrets saying what he said and maybe Zippy regrets coming back at him."

It's really about class...or the lack of it," said Earnhardt. Click here to read the entire TDP column.

We recently saw Dr. Jerry Punch press a clearly embarrassed Joe Gibbs for a verdict on the continued employment of Kyle Busch when it was apparent a decision had not been made. Gibbs was gracious, but Punch kept chasing what was just not there.

This past weekend, Nationwide Series driver Jason Leffler halted pit reporter Jamie Little in her tracks after she skewed his words from a previous answer about his accident with Elliott Sadler. Little was trying to drive up the conflict level between the two, despite Leffler just having said the accident was his fault.

It's a fine line to walk between calling the race on TV and also trying to develop stories or pay-off topics set-up in the pre-race show. Jumping from the reality of simply racing and moving to the scripted agenda of conflict has not been the best mix.

As ESPN now heads into its final Sprint Cup Series race in year 5 of covering the sport, what is your opinion of the network's efforts to date? Thanks as always for taking the time to stop by The Daly Planet.