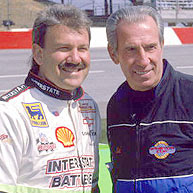 At first glance, Ned Jarrett appears to be a bit more fragile than many of us remember him. Saturday, Jarrett made a "guest" appearance alongside son Dale as an analyst for the ESPN Busch Series race from Lowes Motor Speedway.

Once Dr. Jerry Punch had welcomed Ned and asked his first question, something magical happened. We were all quickly reminded that age may be a function of time, but knowledge does not fade. Instantly, it was clear that Ned was running on all eight cylinders and was ready for a race. The fire still burned.

While it was a "guest" appearance, Ned began with his first comment at Lap 3, and then made the most of what he had been given the opportunity to do. Everything was still sharp, observant, and most of all, kind.

The trademark of the early ESPN coverage was good humor and good racing. I was lucky enough to be a part of those days, and back then there was little glamour in being in Darlington, South Carolina at the height of summer working a twelve hour day. By today's standards, the track facilities were crude, and the TV equipment was worse. I vividly remember Ned walking on the tin roof of the grandstand at Darlington in 100 degree heat to get to the "announce booth." It was also tin, and there was no such thing at Darlington as "air conditioning." These men had character.

Ned was a self-made broadcaster, and retired early from driving with that purpose in mind. He had adopted a manner of relating to people in person that he could very easily translate into the cable TV broadcasts of the 1980's. In the early days, Ned became a standard by which all other NASCAR radio and TV broadcasters were measured.

Many fans remember Bob Jenkins, the late Benny Parsons, and Ned Jarrett as the people who introduced them to NASCAR. Ned and Benny used their own versions of "Southern Charm" to help cable viewers nationwide to understand the strange sport of NASCAR racing. A "young man" named Jerry Punch was a reporter on pit road.

As the Charlotte Busch Series race progressed, Ned became involved in all aspects of the telecast, and offered the kind of low-key but simple and informative commentary that is sometimes missing from today's broadcasts. It was clear he had watched all the Busch Series races, and knew the drivers and teams. It was great.

In the old days, there were a lot of rough characters who needed someone to help them relate to this new "animal" at the track called ESPN. Ned was often seen in the garage, helping drivers and team members with TV advice long before everyone had "PR guys" and assistants. He taught "TV 101" on a constant basis with absolutely no tuition charged.

Ned was constant in his admiration for the Dale Carnegie public speaking course that had helped him to work with the media and public relations aspects of the sport. He often suggested to others that Dale Carnegie could help them in their professional career. Son Dale followed his father's advice, and is also a Dale Carnegie graduate.

Today's race was particularly touching because many believe that Dale Jarrett and Andy Petree have developed in a short time many of the same positive aspects that Ned and Benny Parsons had in their day. It seems that they both are well-informed, comfortable with themselves, and positive in their comments about the sport. This is a far cry from other announce teams that rely on "personalities" to get the job done. When Rusty Wallace returns to NASCAR after the Indy 500 coverage, he may find himself working hard to regain his role as the lead analyst.

Originally, I thought Ned was going to "sit in" on the coverage and offer his opinions of the action as a "guest." However, it became clear during this entire telecast that Ned, Jerry Punch, Andy Petree and Dale Jarrett were having a great time even with four voices in the booth. There were no egos clashing, no one speaking over each other, and only good solid racing information being offered to the viewer. When Ned stepped aside late in the event, it was sad to see him go.

As a young man in my twenties, there were many times when a kind word or a concerned comment from Ned Jarrett kept my head on straight and put a smile on my face in the demanding world of sports television. To see him now well over seventy reminds me of a time when the world was a very different place, and NASCAR was a very different sport. It also reminds me to continue the practice of showing concern and paying attention to the now "young people" in my life who could use a kind word, or just a moment or two of attention from an "adult" like me. Thanks Ned.

The Daly Planet welcomes comments from readers. Simply click on the COMMENTS button below or email editor@thedalyplanet.tv if you wish not to be published. Thanks again for taking the time to drop by.

Update: Many thanks to Jayski for fixing the broken link from his stories/articles page. I emailed him an incorrect link, and appreciate him taking the time to fix it.
Posted by Daly Planet Editor at 11:54 PM 5 comments:

The familiar tones of Allen Bestwick welcomed Busch Series fans to the ESPN2 pre-race show on Saturday night. The fans had come to Lowes Motor Speedway for one of the highest profile Busch Series events of the year. Some of the NEXTEL Cup drivers remained at the track to watch the Busch race. Unfortunately, one of them decided to appear on ESPN2's NASCAR Countdown.

The cameras revealed the new ESPN infield mobile studio and the cast of characters for the pre-race show. In a good move, Andy Petree was present to add the credibility that the infield show has been lacking from an analyst. Also on the set was Brad Daugherty, who once again did not interview, report, or originate any type of content in this program. He should be hanging onto the "Voice of the Fans" title bestowed on him by Bestwick with all his might. He has long since confused race fans with his perspectives and commentaries.

As the host, Bestwick sat on the set knowing that after only one show he had been replaced by ESPN. Announced even as he hosted another classy show, Bestwick had been moved aside for another anchor who ESPN felt was more "familiar" with this role. Her name is Suzy Kolber, and she is currently the sideline reporter for ESPN's Monday Night Football.

She has never appeared on any NASCAR telecast. Kolber will not only host the Busch Series pre-race show, she will also assume the second highest profile seat on the upcoming NEXTEL Cup broadcasts. She will host the NEXTEL Cup pre-race show and continue to be the infield studio host throughout the races. In essence, she was "given" the Busch and NEXTEL pre-race shows before ever having attended a race.

Finally, the last man on the set was revealed by the ESPN cameras. With the three other panelists wearing suits and ties, Michael Waltrip appeared to have just crawled out from under one of his Toyotas. He was wearing an ill-fitting polo shirt and a sponsor's baseball hat...indoors. Prior to air, Waltrip should have been attended to just like the other ESPN announcers. No hat, an agreed-upon shirt, and combed hair should have been demanded prior to allowing him on this program.

For Bestwick, this had to be "deja vu all over again." Many credit Bestwick's calm and professional "straight man" demeanor with allowing Michael Waltrip to perfect his TV personality over the years on Inside Winston/NEXTEL Cup Racing. This unique series raised the profile of Waltrip far beyond his driving abilities, and allowed him to craft a very nice niche in a sport that had formerly treated him as a second class citizen.

When Bestwick was summarily removed by SPEED Channel as the host without warning, Waltrip chose to continue on the show, rather then stepping aside in protest. For many, this cemented the fact that Waltrip had changed. Even today, the program limps along with Waltrip and Schrader trying to reproduce their "act" every week with disastrous results.

Saturday on NASCAR Countdown, it was impossible to take Waltrip at face value as he answered questions both as a driver and owner. As a driver, he had failed to make numerous races, and had just crashed in qualifying and missed the Charlotte NEXTEL Cup event. It was not the slow time of his Toyota that kept him from the race, both he and Reutimann simply wrecked as drivers.

As an owner, Waltrip also had David Reutimann in the Busch race that he and the panel were previewing. Waltrip was treated with kid gloves by Bestwick, who respected the struggles of MWR and Toyota a lot more than many of the fans. In another cruel twist of fate, Reutimann's Busch car began spewing steam on the parade lap, and imploded only laps into the race.

As usual, the pit road reporting was solid, the driver interviews were interesting, and the features helped to put the race into perspective. What the pre-race show needed was more integration with the booth announcers, and less conversation with Mikey. The time has come for Mr. Waltrip to step out of the media glare and only return when he has his own professional and personal houses in order. It seems, sometimes, that Waltrip is his own worst enemy. A fact that Allen Bestwick knows only too well.

The Daly Planet invites comments from readers. Simply click on the COMMENTS button below, or email editor@thedalyplanet.tv if you wish not to be published. Thanks again for taking the time to stop by.
Posted by Daly Planet Editor at 8:46 PM 12 comments: