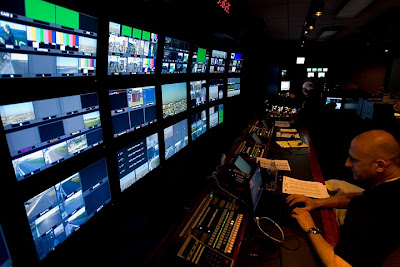 Here is an updated story on former NASCAR on ESPN Sr. Producer Neil Goldberg, arrested last week in Connecticut on a number of criminal charges stemming from a Peeping Tom incident.

Goldberg has not worked at ESPN since his arrest last week, which also included charges of simple trespass, disorderly conduct and breach of peace. ESPN VP/Communications Mike Soltys would only confirm that Goldberg no longer works for ESPN.

This should close a very difficult time for the NASCAR TV team. This group travels together from February through November producing all the Nationwide Series races and the final seventeen Sprint Cup Series events.

Thanks to our friends at SportsBusinessDaily.com for the update.
Posted by Daly Planet Editor at 4:37 PM 13 comments:

Your Turn: Sprint Cup Series From Fontana On ESPN 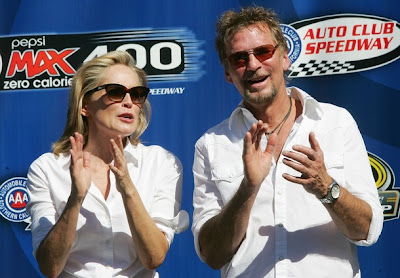 The wind was blowing, the sun was shining and the Sprint Cup Series was racing at the Auto Club Speedway in Fontana, CA on ESPN. As pictured above, Sharon Stone was out to wave the green flag and Kenny Loggins sang the anthem.

Allen Bestwick started the day from the Infield Pit Studio with Rusty Wallace and Brad Daugherty. These three discussed extensively the Kyle Busch vs. David Reutimann scrap from the previous week. There was a feature on Jimmie Johnson at his annual fund raising efforts in the area.

ESPN repeated a feature on Greg Biffle that had been used earlier in the week and strangely avoided the Danica Patrick accident from the day before.

Marty Reid, Dale Jarrett and Andy Petree were in the TV booth. This is Reid's first time in the NASCAR booth for the Chase and it's clearly been a learning experience. Jarrett and Petree have been adjusting to the style of Reid which is very different from the previous seasons of Jerry Punch.

Sometimes, it seems that Jarrett would like to be involved in the play-by-play call of the race, as he jumps in from time to time with bursts of excitement. Reid was caught several times working off the TV monitors in the booth when looking out the front window would have shown him the reason for the caution on the track.

Dr. Jerry Punch is an ER doctor, but it was Allen Bestwick who offered the medical update on injured USAC driver Shane Hmiel and Dave Burns who updated the fact that #31 crew chief Todd Berrier had been transported to the hospital before the race.

Jamie Little, Dave Burns and Vince Welch were the remaining pit reporters. Burns got clobbered on pit road before the race while talking to Jeff Gordon by another camera crew. It was just one of those moments for Burns, who normally flies under the radar.

Race coverage consisted of ESPN alternating between using wideshots with in-car cameras early, then tight shots for entire segments and finally the insertion of the double video boxes toward the latter part of the race. The boxes were then dumped with about 40 laps to go and appeared again briefly with less than 20 laps in the race.

ESPN had no technical problems and made great pictures. The race featured some segments of good racing and some that were rather boring. There were no tire problems and only minor incidents that brought out the caution.

The TV coverage had good stories to follow as mechanical troubles affected several of the favorites and speeding penalties sent some cars to the tail of the longest line. The race ended inside of the scheduled timeslot and featured one final crucial pitstop.

This post is your opportunity to offer a race wrap-up of the ESPN TV coverage. To add your opinion, just click on the comments button below. This is a family-friendly website, please keep that in mind when posting. Thanks for stopping by.
Posted by Daly Planet Editor at 12:05 PM 64 comments: