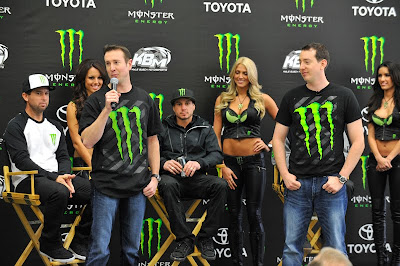 It was a press conference ten days ago that featured some memorable images like the one above. While NASCAR fans will recognize the Busch brothers, the two men sitting down really tell the tale.

Seven-time Supercross champ Jeremy McGrath and BMX legend Dave Mirra look like the brides in a double shotgun wedding. Their friend and former motorcycle champion, Ricky Carmichael, had just been unceremoniously dumped from his NASCAR sponsorship by Monster. The GOAT was out and the Busch brothers were in.

Here is part of the official Monster release:

A collection of world class Monster Energy action sports athletes welcomed Kyle and Kurt Busch to the Monster Energy team today with the announcement of a multi-year agreement as primary sponsor of the team’s No. 54 Monster Energy Camry in the NASCAR Nationwide Series for Kyle Busch Motorsports.

"It’s great to have the Busch brothers join the Monster team and be wearing the Claw – they have the right attitude for Monster and they’re proven winners, which is what Monster is all about,” said X-Games champ and Monster athlete Jamie Bestwick.

I’m thrilled to a be part of a team of athletes like this,” said Kyle Busch, who will drive the season-opening race at Daytona International Speedway and the subsequent four races before splitting the balance of the season with Kurt.

The Nationwide Series has ESPN coverage with races appearing mostly on the ESPN2 TV network. Over the past five years it has primarily consisted of watching Sprint Cup Series stars race each other for wins while thoroughly thumping the Nationwide Series regulars into the asphalt.

All that was supposed to change this season for ESPN. Carl Edwards is gone from the Nationwide Series by choice and is expected to join ESPN in some on-air capacity. Kevin Harvick disbanded his growing KHI team and the focus of Kyle Busch Motorsports was the Camping World Truck Series. Much of the Sprint Cup Series cloud appeared to be lifting.

The reason ESPN wants so desperately for the Sprint Cup Series drivers to get out of the Nationwide Series races this season is easy to understand. Her name is Danica Patrick. It's nice that guys like Austin Dillon, Elliott Sadler and Sam Hornish Jr. will be running for the title, but it's a TV ratings gold mine that Patrick will simply be in every race.

With the January 20 announcement that the Monster dollars would be leaving Carmichael, ESPN's world has changed. In the blink of an eye there will now be either Kyle or Kurt Busch running a car in every single one of ESPN's Nationwide Series races with the goal of winning the owner's championship.

It was 2006 when then ESPN president George Bodenheimer called the Nationwide Series NASCAR's diamond in the rough. Two years into the coverage, things were not going well. "Diamond In The Rough Not Shining" was a TDP column from July of 2009. Click here to read it in full.

No part of the NASCAR TV package has been worse than the Nationwide Series on ESPN. The series was a victim of the Jerry Punch and Rusty Wallace failed experiment in the TV booth. It was also a victim of ESPN pushing it to the back burner when the network started Sprint Cup Series coverage in July.

Finally, it has been a totally helpless victim from September to November. Jammed into an ESPN2 schedule totally filled with "College Football Saturday" programming, the Nationwide Series is made to look like the redheaded stepchild and every season since 2007 has gone out with a whimper.

This year ESPN is in an interesting situation. Come July it may well have Carl Edwards on the telecast team, Danica Patrick in the top five in driver points and the Busch brothers in the middle of another ego-driven total meltdown.

Joe Gibbs made a point on the NASCAR Media Tour to say he did not approve of KBM's Nationwide Series plans. As Kyle's Sprint Cup Series employer, Gibbs is clearly not pleased with the prospect of the Busch brothers running door-to-door with the JGR Nationwide Series drivers.

Last year's Kyle meltdown almost cost Gibbs a multi-million dollar sponsor. Many thought it would cost Kyle his JGR job. The Kurt meltdown at Penske resulted in a series of laughable press releases that tried to frame his firing as a mutual decision. The video of the Jerry Punch incident told another tale. The captain had enough.

So, instead of the carefully scripted TV reality series that features golden girl Patrick against a weakened field of contenders, the ESPN pit reporters may regularly be walking to Victory Lane to speak with a grinning Busch brother sporting "The Claw" and trying to say things that fit the extreme action sports athlete mold.

ESPN's new little monsters may also affect the TV coverage when they lose. It would only take an incident with Kyle and a JGR car or Kurt and a Penske entry to shift the TV spotlight from the winner. Let's not forget Richard Childress as someone who has a vested interest in his Nationwide Series team and also a past with the Busch family. "Hold my watch" was a phrase that is forever etched in NASCAR history.

Love them or hate them, expect to see a lot of Kurt and Kyle on the ESPN Nationwide Series telecasts. Monster hired them to win races and they can both come in and do just that. Where they fit into the ESPN script is yet to be seen, but there is little doubt it's not going to be what the network had planned. With the Busch brothers, it just seems to happen that way.

We welcome your thoughts on this topic. To add your opinion, just click on the comments button below. Thank you for taking the time to stop by The Daly Planet.