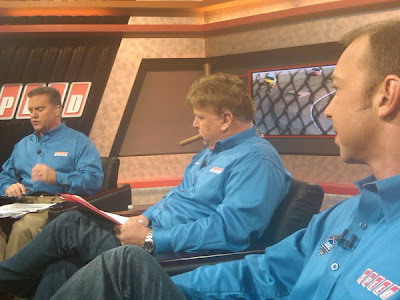 It's just about time to begin the cycle again. Believe it or not, the first two TV series containing NASCAR content start again in just one week.

Next Sunday at 7PM, we welcome back The SPEED Report. Revamped by the network last year, TSR has turned itself into the premiere motorsports news series on television.

SPEED uses a small group of studio hosts who rotate through their assignments while also working on the network's live racing series. Bob Dillner has been the NASCAR field reporter with Ray Dunlap handling the Camping World Truck Series news.

This program shows the best of what SPEED can offer should the network desire to return to more coverage of motorsports news and less reality and lifestyle programming. TSR covers all types of racing in a classy hour.

Late last year, SPEED scrambled to add a new NASCAR news program to the line-up. It came on the week of the Hall of Fame selections, which was rather curious. Whether the network got a wake-up call from NASCAR or just finally came to its senses, the results have been positive. Monday, January 11th, Race Hub returns to SPEED.

This thirty-minute program originates from the SPEED studios located just down the road from many of the NASCAR shops and the Charlotte Motor Speedway. Drivers, owners and media members have been frequent guests since the show began. Still searching for a format, the program has already decided to be casual in both attire and presentation.

A host or co-host chats with studio guests, updates news and offers an interview done that day at a shop or NASCAR office. During the last two weeks of the season, SPEED found that having multiple drivers in the studio at the same time made for rather stimulating conversation. Hopefully, that memory has lingered.

The good news this season is that SPEED has responded to the upset West Coast fans and added a later re-air of each program. The Monday through Thursday episodes will now air at 7:30PM Eastern and then re-air at 8:30PM Pacific Time. Super move by the network and a big commitment of TV time to NASCAR content.

Also, fans of This Week in NASCAR should shortly find out if that show is returning to SPEED. In the middle of last year, panelist Michael Waltrip sent and then deleted a Tweet saying the show may be cancelled due to low ratings. Adding Jimmy Spencer to the program for The Chase did not help. Spencer was a flop and Greg Biffle has never become a viable panelist.

It's pretty plain that Waltrip and Chad Knaus were the two valuable properties in this series. Waltrip has been on the show for over a decade and Knaus is the current championship crew chief. Waltrip's personality and the knowledge of Knaus made a nice TV package.

The twist to all this is that The NASCAR Media Group that produces TWIN now has another project that sounds very similar. Inside NASCAR begins a 38 week run on the Showtime network in February.

That gets us to wondering if TWIN gets cancelled, will the entire gang move on over to Showtime? Although the thought of Waltrip unleashed on Showtime is interesting, the audience is small and the TV channel is subscription only.

Update 10AM ET: NASCAR Media Group announced that Inside NASCAR will be the first NASCAR TV series distributed on the Internet and cell phone. It may be weekend highlights on Wednesday, but this is a good start to get more NASCAR content online.

Ricky Craven confirmed on Sirius that he will be returning to ESPN2's NASCAR Now, which is great news. Craven has been a standout in the studio analyst role and his increased weekend presence would be a welcome addition.

Speaking of Sirius, the new weekday line-up of hosts and programs should be out soon. Lots of buzz around about changes as the dynamic of mixing MRN and Sirius folks continues to play out. Sirius still has the satellite radio coverage of all three of NASCAR's national touring series.

Meanwhile, ESPN has already announced the changes involving Marty Reid and Jerry Punch. Fox returns the entire NASCAR team for this season. TNT also returns everyone, but has yet to announce who will handle the play-by-play assignment this summer. That could be very interesting.

Stay with us this week as we will continue to post all the news and information as it comes out. Once again, we will have the multi-network NASCAR TV schedule on our mainpage with announcers, guests and features listed.

In the meantime, feel free to comment on any of the topics mentioned above. To add your opinion, just click on the comments button. This is a family-friendly website, please keep that in mind when posting. Some comments may be moderated prior to posting. Thanks for taking the time to stop by The Daly Planet.
Posted by Daly Planet Editor at 12:05 AM 15 comments: