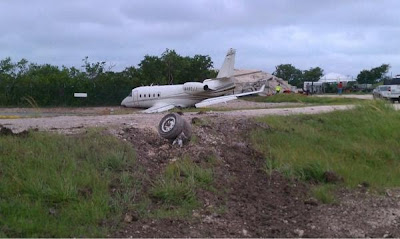 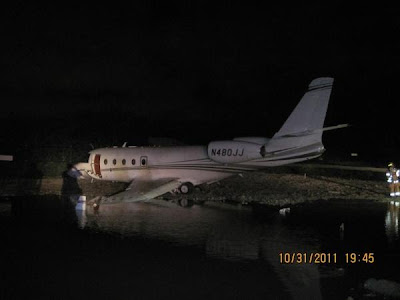 News came out Monday night that a Hendrick Motorsports airplane had skidded off the runway while landing at the airport in Key West, FL. Rick and Linda Hendrick were on board with two pilots.

This is the original news story from Keysnews.com:

A private G150 Gulfstream jet containing four people missed the runway while landing at Key West International Airport and ran into the salt ponds at 7:45 p.m. No one was seriously injured.

The airplane was co-owned by Jimmie Johnson Racing II Inc. and Hendrick Motorsports LLC of Charlotte, N.C. Monroe County Airports Director Peter Horton confirmed the famous NASCAR driver was not on board.

Everyone was taken by ambulance to Lower Keys Medical Center for evaluation. Only two complained of injuries: one for neck pain and one for shortness of breath/heart palpitations, according to Monroe County Sheriff's Office spokeswoman Deputy Becky Herrin.

There were two pilots and two passengers, but it was unclear who was injured. The airport was closed for about an hour, but has reopened. Some fuel spilled, but it was unknown how much. The small-business jet was approaching the west end of the runway. The pilot said he landed, but had no brakes, Herrin said.

The picture above of the plane was provided by the Monroe County Sheriff's Dept. and posted on Twitter by AP reporter Jenna Fryer.

Additional information was subsequently posted by the Miami Herald and revealed that the plane benefited from a recent safety improvement at the airport.

Here is the story from Cammy Clark at the Miami Herald:

The Gulfstream 150, which was registered to NASCAR’s five-time champion Jimmie Johnson, who drives for Hendrick Motorsports, apparently lost its brakes upon landing at the small airport at about 7:45 p.m.

Horton said the pilot and co-pilot radioed to the tower saying they had “no brakes.” The plane skidded completely off the 4,800-foot runway and came to a stop along a 600-foot unpaved safety area that had just been added at the airport in May .

“If this area hadn’t been added the outcome would have been different and probably catastrophic,” Horton said. “Before we had only 100 feet of overrun and then they would have gone into a salt pond and hit an embankment.”

The pilot and co-pilot, whose names were not available Monday night, were walking after the accident and did not appear to be injured, Horton said. But both pilots were taken to the hospital for evaluation.

Hendrick and his wife were put on stretchers and taken to the hospital. The extent of their injuries was not available Monday night.

It's easy to click on Google maps and view the safety area at the Key West International Airport that is referenced in the story. The Hendricks have a compound on the private Sunset Key island that contains a main house and several guest cottages. It is used for corporate entertainment and as a family get away.

Team Hendrick had not released any additional information, but there is no indication that either Rick or Linda Hendrick was admitted to the hospital. Tuesday should bring some more specific information.

Thanks to the Florida-based news outlets for this information. We welcome your comments on this topic.