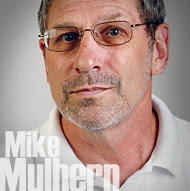 This column is updated at the bottom of the story.

The talk has been about the TV coverage of NASCAR and cost-cutting here at TDP for the last couple of days. Now, the reality of the economy has been extended to the NASCAR press corps.

There are several high-profile reporters who will not be returning to the Sprint Cup Series beat next season. Mentioned in this article (click here) in the Winston-Salem Journal is a name that is also familiar to NASCAR TV viewers.

Mike Mulhern was great on TV. He brought an attitude and a demeanor that was able to draw the best out in others because they were often suddenly on the defensive. Love him or hate him, Mulhern was a presence on SPEED both during his Tradin' Paint appearances this season and his semi-regular presence on the earlier Pit Bull program.

It was back in 1974 when Mulhern first began to patrol the NASCAR garage and eat the Infield Media Center food. His distinctive voice could often be heard by fans watching the post-race press conferences live on ESPNEWS.

His questions were sometimes hilarious and often outrageous. Mulhern is one of those independent-spirited reporters who is fun to read and even better to listen to when he is talking NASCAR.

Click here for his goodbye video. After reviewing the Homestead race, Mulhern does a great goodbye about two minutes in with some tips for fans. While this may be his final season at the Winston-Salem Journal, it appears Mulhern may be joining the Internet gang with his own website in 2009.

Over on Jon Lowder's blog (click here), he wonders why this had to happen.

"Although any cuts by the paper come as no surprise, I'm wondering why they'd cut the one guy covering a professional sport that actually makes sense here in Winston-Salem? Obviously there's no need for pro basketball or football coverage here, but NASCAR's an institution and Mulhern is one of the old hands covering it."

"Maybe the folks at the paper figure Mulhern will have as easy a time finding a job as anyone given his knowledge of, and connections to, the racing industry. Maybe, but I think they missed one of their best multimedia opportunities by letting him go. I suspect they could have made a pretty penny finding ways to get his expertise syndicated to other outlets as those folks cut back their non-core assets."

I completely agree with Mr. Lowder. Rather than saving money on one reporter's salary, the Journal is losing an asset that it cannot replace. Mulhern was great on paper, fun on the radio and just getting good at his video skills. This combination is exactly what the reporters of the future must possess.

In a couple of weeks, when the 2008 budget year is officially over, we will recap the changes in the NASCAR media landscape. Some of the names who will be either leaving the NASCAR scene completely or trying to venture out into the Internet-only world in which we live are very interesting.

But, for right now we are just sorry to see Mulhern move away from a newspaper that was as deeply intertwined with NASCAR as the Charlotte Observer or the Daytona Beach News-Journal.

Keep an eye on MikeMulhern.net during the off-season. While it is under construction now, there is little doubt Mulhern will make himself heard one way or another before the engines start for Speedweeks.

Update #1 - Click here for the link to the final blog post for Yahoo! Sports Jerry Bonkowski. Yahoo! is downsizing the NASCAR presence and Bonkowski is moving on.

The Daly Planet welcomes comments from readers. Just click on the COMMENTS button below and follow the easy instructions. The rules for posting are located on the right side of the main page. Thank you for taking the opportunity to stop by.
Posted by Daly Planet Editor at 7:18 PM 25 comments: