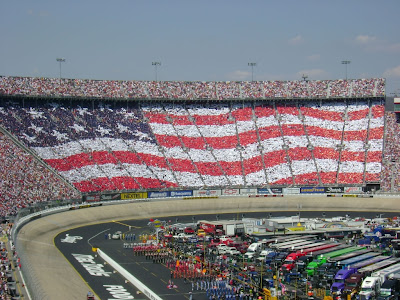 After a week off, the NASCAR on FOX gang seems to be eager to get back to work. Some of the announcers have been working for SPEED this weekend on practice and qualifying coverage. The single storyline that has emerged is tires.

Equipment issues are the great equalizer. After trouble on Friday, Goodyear and NASCAR switched right side tires for both races. The Nationwide Series race went off without a hitch, but the Sprint Cup Series cars are a bit different.

Tires may be the hot topic for Chris Myers, Darrell Waltrip and Jeff Hammond on the pre-race show. Waltrip has already said FOX has a surprise in store for viewers. The hint is that the location of the outside stage may be rather unique.

On Saturday, NASCAR lost all timing and scoring at the track for a good part of the Nationwide Series race. Marty Reid responded by simply ignoring the big scoring pylon in the infield and telling viewers nothing. No top ten, no lap counts, nothing.

Luckily, Mike Joy is a veteran and is great at passing along information. The key to Joy being effective at Bristol is having Waltrip give him time to talk. Last year, the emotion of Waltrip overpowered the race telecast. Waltrip told stories, updated his opinions on NASCAR topics and generally ruined a good portion of the race for TV viewers.

The 16 second laps at Bristol require focused commentary from all three men in the TV booth. While Larry McReynolds has faded into the background this season, Waltrip has continued to dominate the telecasts. At Bristol, that leads to another problem.

Once the race begins, the pit reporters are basically in a bowl of sound. The noise is so loud hand signals are the only way to communicate with crew chiefs, officials and field producers. As the stories of the race unfold, the pit reporters are going to be key to keeping viewers informed, especially with the new points system in place.

On the video side, pictures from Bristol are both beautiful and challenging. Wideshots and aerial views can show TV viewers just how small the track really is in relation to the grandstands. Low angle "speed shots" work on restarts and replays, but are tough to cut-in live. In-car cameras live are just a disaster.

This season, FOX has refused to show the lead lap cars racing to the finish line on the final lap. Instead, the drama of the NFL approach is back. Several key members of the NASCAR on FOX production team also work on the network's NFL coverage.

While it might be nice to see a tight shot of a wide receiver catching a long pass for the winning touchdown, this approach has fallen flat in NASCAR. Watching only one of the 43 drivers who are racing in 36 events over a ten month period win a race loses a little something. That something would be the entire rest of the field.

As we have said since 2007, fans of all the drivers deserve to be treated equally by the NASCAR TV networks. While SPEED and ESPN do a great job on the final lap, the FOX production is simply a misguided mess. If only one car is seen crossing the line at Bristol on TV, there is going to be a fan backlash of epic proportions.

This post will serve to host your comments on the FOX coverage of the Sprint Cup Series race from the Bristol Motor Speedway. To add your TV-related comments before, during or after the race just click the comments button below. This is a family-friendly website, please keep that in mind when posting. Thanks for taking the time to stop by The Daly Planet. 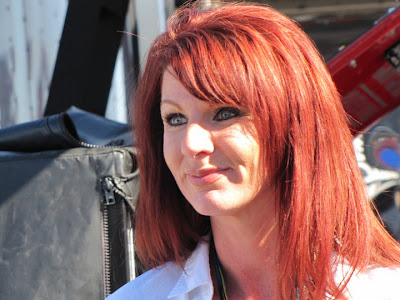 Update: Jennifer Jo Cobb news can be found in the comments section.

The ESPN TV booth at the Bristol Motor Speedway is waiting for Rusty Wallace. He is a former stand-out at the track, a former Sprint Cup Series champion and a current Nationwide Series multi-car owner. Saturday afternoon, he gets a shot at moving up from the infield pit studio and calling a big race on a critical weekend for the sport.

Wallace has to contend with the pending Goodyear tire problems, the presence of the elephant in the room with Danica Patrick in the field and the fact that he has not called a big race from the TV booth for some time.

Forget the presence of his own teams in the event. Forget the fact that he just signed with ESPN through the 2014 season. Forget that he is clearly in the middle of building a racing organization with Sprint Cup Series participation in mind for the future.

The history of Rusty Wallace in the TV booth is that sooner or later his temper will get the better of him and the comments will begin to fly. The upside of Wallace is his knowledge of racing. He was a hands-on guy who came up the hard way. The downside was that when he lost it, he just lost it. Hothead all the way.

One key to Wallace's current success on the ESPN telecasts sits to his right. Allen Bestwick simply knows how to direct traffic on the air. He did it on the radio and has been doing it on ESPN as a pit reporter, a substitute play-by-play announcer and now as the fulltime host of the Infield Pit Studio since 2007.

Bestwick knows when to give the infield analysts time to discuss topics and when to step right back in and take control. The challenge for Wallace in Bristol this Saturday may be having a different man sitting to his right. Marty Reid has been having a tough time since coming over from the NHRA and IndyCar beat.

Despite early optimism, Reid has struggled in this role and last season's NASCAR coverage on ESPN ended with a thud in Homestead. It wasn't pretty.

Reid and Wallace will be joined by ESPN's voice of reason in Andy Petree. He is the one man in the booth who has been in that position since ESPN returned to NASCAR. Petree and Wallace frequently disagreed when they worked together side-by-side. At a track like Bristol, it will be very interesting to watch the dynamic between these two analysts.

Bestwick will host from the infield with Brad Daugherty alongside. Tim Brewer will be in the Tech Garage. Dr. Jerry Punch, Vince Welch, Jamie Little and Dave Burns will be covering pit road. This time, ESPN brings ten voices to Bristol.

TV fundamentals apply across the board at this track. Focused comments from the analysts mixed with excitement and information from the play-by-play announcer is the only combination that works when laps take 16 seconds.

Pit reporters work with hand signals to their production teams because of the noise level under green. It's tough to slip in any Tech Garage segments or use the infield studio unless there is a caution. The action is just too fast.

Each season, the biggest complaint is the TV commercials. 16 second laps and three minute commercial breaks simply do not mix. Without any side-by-side commercials or an online RaceBuddy for the Nationwide Series, be prepared to miss a lot of this race when ESPN is in commercial under green.

This is the new Bristol and the Nationwide drivers have shown that racing side-by-side is easy to do. Banking on countless caution flags for commercial breaks could be a rough philosophy. It should be very interesting to see how the ESPN producer handles this challenging element of the telecast.

As we have discussed for years, using the in-car cameras at the wrong time can ruin a viewer's experience at this track. Instead, an aggressive TV director stays ahead of the field and shows viewers "more headlights than brake lights." If you begin to see the back ends of race cars, someone is getting tired.

Bristol has some great angles and views from the high cameras because the track is so small. Also, the aerial shots can really show the beauty of the area and the unique location of the track to TV viewers. Returning from commercial break, offering a "scene set" by using these types of shots allows for a smooth transition.

In the old days, the rule was no music into commercial break when the cars are under green. The theory was that TV viewers tuned-in to see and hear the cars, not someone's selection of tunes designed to "fit the location." This has certainly been an issue with ESPN this season.

The NASCAR Countdown pre-race begins at 1PM and the green flag should fly around 2:14PM ET. The weather looks good.

This post will serve to host your comments about ESPN's production of the Nationwide Series race from the Bristol Motor Speedway. To add your comment before, during or after the race just click on the comments button below. This is a family-friendly website, please keep that in mind when posting. Thank you for taking the time to stop by.