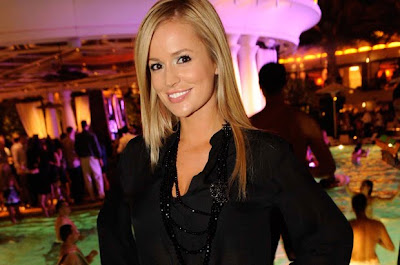 Reality TV is in pretty tough shape. The backlash against the reported deception and scripted marriage and divorce of Kim Kardashian continues to grow. Clones of cheap-to-produce shows about storage lockers, pawn shops and repo men now dot the TV landscape.

Amid this chaos, ABC continues to push ahead with the franchise shows that draw female viewers of all demographics. There is just something about The Bachelor and The Bachelorette that women cannot resist.

Last year viewers of the Bachelor saw Emily Maynard selected by Brad Womack to be his wife forever. The loving relationship lasted until June and never made it to the altar. What it did make was a reality TV star out of Maynard. Now, she gets to take center stage in a melodramatic reality with NASCAR wrapped all around it.

In stories from People magazine and Entertainment Weekly, Maynard has reportedly agreed to become The Bachelorette for ABC as that reality TV franchise rolls on. As you may remember, Maynard was engaged to Ricky Hendrick, the son of NASCAR team owner and car dealer Rick Hendrick, before Ricky lost his life in a tragic plane crash back in 2004.

Shortly thereafter, Maynard revealed she was pregnant with his daughter and now Ricki is a happy and healthy young girl. In agreeing to take on this central reality TV role, Maynard made it clear she did not want to be away from her daughter. ABC reportedly responded by moving the entire production of the series to the Charlotte, NC area.

On The Bachelor, Maynard played out her Hendrick connection in an interesting and rather scripted scene at the Las Vegas Motor Speedway where Womack brought some of the ladies for a "date." It pointed out just how much the Hendrick and NASCAR connection can be used to exploit the mostly female audience.

The management at LVMS had no idea who was involved in the production, but NASCAR itself did work with the Bachelor production team when it came to the involvement of the NASCAR Racing Experience, a drive or ride along race car program.

This time, Maynard's connection with the Hendrick family will be out in the public eye on national television. The specific shooting locations for the program have not yet been reported, but NASCAR country figures to play a strategic role. It will also be interesting to see if any NASCAR personalities, many of whom already have extensive TV experience, make an appearance.

The Mooresville and Concord areas are ripe with colorful locations that have racing connections. There is little doubt as the word filters out that this series is coming the phones will be ringing with offers of locations that the production team can use to create some additional "reality TV."

As this is an ABC property, expect to see promotional integration with the NASCAR on ESPN programming as the season rolls on. Filming of the series begins in March and the first episode hits the air in May.