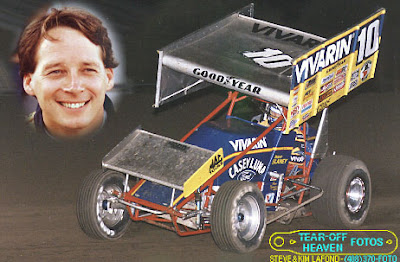 Each Wednesday, the daily motorsports show on ESPN faces a dilemma. Aside from the news items, NASCAR Now is basically without regular racing content. Over the last six months, this middle of the week day has seen all kinds of features and reports.

On other racing TV shows, this day was set aside to serve a purpose. Maybe it exposed a new racing talent, or featured a regional series that did not get a lot of TV time. Other uses have been a weekly behind-the-scenes feature or even a segment dedicated to hearing what the fans have to say. ESPN will have none of this.

After dispensing with the mandatory news that Dale Earnhardt Junior will not be leaving DEI with his number eight in tow, the show stepped around all the other NASCAR stories and revealed to America that ESPN has discovered drivers race during the week.

One of the most popular things for drivers to do, especially on the Cup side, is to go to local tracks to race mid-week. Over the past several years, a bunch of drivers have bought both pavement and dirt tracks. This influx of money and influence has been great for the local scene, with lots of upgrades at these facilities.

Earlier this year, we saw a ton of Cup and even NHRA guys fly up to Tony Stewart's Eldora Speedway for a charity race. This one has gotten so big they offered it live on pay-per-view and managed to raise over a half million dollars for the Victory Junction Gang Camp.

The occasion this time was Dave Blaney's little Sharon Speedway in Hartford, Ohio. This small dirt track is owned by the Blaney family. Kevin Harvick and Clint Bowyer, former team mates of Blaney, along with sprint car friend Tony Stewart stopped-by to race the locals in a twenty-five lap feature.

This type of thing is done all the time. Fans who watch RaceDay or Inside NEXTEL Cup can hear Kenny Wallace and Ken Schrader talk about it almost every week. What lots of drivers like to do when they have some time during the week...is race for fun.

NASCAR Now ran a long feature on this one night of racing, and added-in a lot of sound bites from the drivers talking about...racing. Host Erik Kuselias voiced-over the highlights and found himself screaming "tell me that don't look like fun" while the Late Models slung some dirt.

After all this, Dave Blaney appeared for a live interview. As most of us know, Dave won his way into NASCAR by being one of the most exciting sprint car drivers of all time. Somebody should have told the host. He had no clue, and never even mentioned the rich Blaney family racing history.

Dave is a wonderful guy, but Kuselias just did not get it. People race like this all the time in NASCAR-land, and it was not a big deal. Dave kept trying to calmly explain this, that its just fun. That was not enough for the host.

"Critique Harvick's performance" demanded Kuselias. Dave said that was kind of tough to do, because he was racing Clint Bowyer for tenth at the same time. See, they all race at the same time on the same track. That's why its called "the feature."

After this nice video report, and then Dave answering questions politely, you just had the feeling it had to end. And brother, no one can end a good feeling on national TV like Erik Kuselias when NASCAR is the topic.

Carefully reading his script word-for-word, Kuselias lowered the boom. "Now that you're currently thirty-sixth in the standings as far as 'The Cup' is concerned, how are you going to attack qualifying differently now that you are just outside the top thirty-five?" he said reading carefully. Did I mention that no one can rain on a parade like this guy?

After all the good will, after all the video of Dave's family-owned track, and after Blaney coming-on and talking about that night, this transition was absolutely rude. Maybe if Kuselias had said "let me ask you one question about your other job" or something like that it would have softened the blow. This was just harsh.

The look on Blaney's face said it all, but he took what is now known as a deep "Kuselias breath" and responded. Richard Childress took the same breath this week when Kuselias asked to go hunting with him next time. That one was priceless. RC said he was going to Mongolia in a couple of weeks and Kuselias could be his gun-bearer. The lawyer declined that settlement offer.

Blaney said "well, we have had plenty of weeks outside the top thirty-five. All day Friday we will be in qualifying trim...we probably ran a dozen races like that earlier this year." Already done that a dozen times this year.

In other words, your question is ridiculous and beyond naive. When we have to qualify on time, we work on qualifying. When we are in, we work on race trim. Is there anyone out there who watches NASCAR who does not know that? Raise your hand.

The interview and the video report were over and the show went to commercial. Just about each and every week, NASCAR Now has Wednesday to use as a conduit for information that would not "fit in" on the other days of the week.

Wednesday would be great to expose any of the hundreds of Americans racing in NASCAR regional series across the nation. Tracks and fans would be happy to send in videos of their action, and it might include some names we have seen before.

Earlier this year, NASCAR Now featured names like Joey Logano, Chad McCumbee, and Brian Ickler. How are they doing? What are they doing? In "TV land," they call this following-up on one of your own stories. Its usually done...a lot.

NASCAR is also pushing hard with its regional Busch Series, its Modified Tour, and its Grand National West Division. By Wednesday, the FedEx truck could have made its way to Bristol with some highlights featuring this action and the NASCAR stars of tomorrow.

Don't get me wrong for one second, Dave Blaney is great and his family and the track were a good story. The point is, if you establish Wednesday as a day for a regular feature, then viewers will tune-in on what is normally a slow day.

Simply by focusing on the other areas of the sport in the only daily TV show dedicated to NASCAR, fans would get a completely different perspective about the amount of racing action going-on across the nation on any given weekend.

Regional racing action is great, and instead of a small favor by three drivers being the number two story on national TV, we could really be informed about what is going-on in NASCAR's other popular series.

If you wanted to know, Ickler was second at Fontana, Logano won at Adirondack Speedway, and McCumbee is going to sub for Kyle Petty who broke his hand. That would be...follow-up.

The Daly Planet welcomes comments from readers. Simply click on the COMMENTS button below, or email editor@thedalyplanet.tv if you wish not to be published. Thanks again for stopping-by, and leaving your opinion.
Posted by Daly Planet Editor at 8:29 PM 15 comments:

A big thank you to Dave Moody and Producer Ryan Horn for allowing me to stop-by Sirius Speedway once again. Its always fun to talk NASCAR TV with someone like Dave who knows the sport so well.

You can see Dave's blog at motorsports-soapbox.blogspot.com and it is always worth the read.
Posted by Daly Planet Editor at 5:57 PM 3 comments: