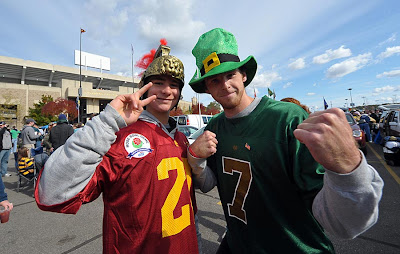 It's that time of the year again. Time for our annual discussion about the impact of college football on NASCAR's number two series. The Nationwide Series was called an "unpolished jewel" by ESPN president George Bodenheimer back in 2006.

Since that time, ESPN has used the February through August coverage of the Nationwide Series to maintain the network's presence in the sport. Once college football begins, the series takes on an all too familiar position. On September weekends at ESPN, the Nationwide Series becomes the redheaded stepchild.

This week's race is from the Atlanta Motor Speedway. There is a live college football game scheduled at 3:30PM ET on ESPN2 Saturday. Three hours later, the Nationwide Series pre-race show begins on the same network. Rarely have we seen football games end in a three hour "window" over the past couple of seasons.

The actual race coverage begins at 7PM and is scheduled for three hours. At 10PM, Cincinnati and Fresno State will be ready for kick-off of ESPN's late college football game. Once again, the Nationwide Series is the meat in a college football sandwich.

At 2:30PM on Saturday, Mike Joy and the SPEED TV team will cover Nationwide Series qualifying. There is no TV coverage of practice. SPEED will handle the Nationwide Series programming and news coverage right up until the pre-race show. That's the only way to get it on the air.

Infield Studio host Allen Bestwick is all too familiar with having ESPN2 viewers join the pre-race show in progress. While some may argue that the race is the key, that's not really true this time of year. Nationwide Series sponsors need exposure and telling the stories and updating the news during the pre-race show is key to meeting that goal.

At the end of 2008, some homes that carried the ESPN Classic network switched that channel to ESPNU, the college sports network. On many systems, ESPN Classic is now part of a pay tier or simply unavailable. This network was the emergency valve for Nationwide races when college football was interfering with coverage. No longer.

As the familiar college football scenario begins to emerge, ESPN responds by trying to shift attention to the Sprint Cup Series. The resulting Chase overkill proved to be a mess last season. The Nationwide Series simply slipped away as an afterthought.

There are several more years to run on the current ESPN contract with NASCAR for Nationwide Series coverage. NASCAR content can't move to ESPN3.com due to online rights issues. ESPN has no plan to launch a third general sports channel and moving the final three months of Nationwide Series races to SPEED is not an option.

So, buckle up and get ready for three months of a bumpy ride on ESPN2. Saturdays dedicated wall-to-wall at ESPN for college football will come momentarily to a screeching halt while the Nationwide Series drivers run a race. Then, in the blink of an eye NASCAR is gone and ESPN returns to the network's bread and butter of college football.

We welcome your comments on this topic. To add your opinion, just click on the comments button below. This is a family-friendly website, please keep that in mind when posting. Thanks for taking the time to stop by.
Posted by Daly Planet Editor at 12:05 AM 18 comments: