It Started With A Cheer 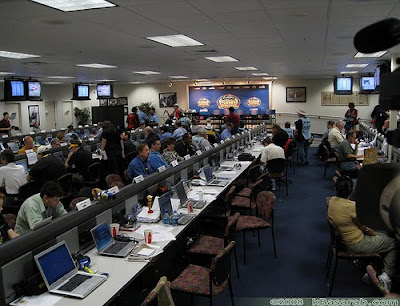 As Trevor Bayne crossed the finish line of the Daytona 500, some of the media folks credentialed for the race cheered. In journalism circles, this is a big mistake. Reporters are neutral. That is what makes them good reporters.

At Daytona, the media center is now a mix of online journalists, TV and radio reporters and writers for various NASCAR blogs.

Tom Bowles was a freelance reporter for Sports Illustrated working the NASCAR beat and had been for several years. He also operates the Frontstretch.com NASCAR website. Basically, his money was made with SI and his passion is Frontstretch.

Bowles was one of the folks who applauded when Bayne crossed the line. In subsequent articles and tweets he expressed that his passion as a fan witnessing a major upset got the best of him. Bowles also reported Bayne got an ovation later in the media center when he conducted post-race interviews.

On Twitter, Bowles went at it with several of the top NASCAR reporters in the sport about the issue of applauding in the media center. Twitter is read by tons of NASCAR folks, including the high-ranking management. Bowles did not back down and things got pretty personal between himself and several reporters.

Today, Bowles was fired by SI.com for his actions in Daytona. The issue is a culture clash, plain and simple. The problem for NASCAR is how to handle the repercussions. There will be many.

Bowles was not one of the Citizen Journalists, he was not a blogger and not an amateur working on a website as a hobby. He has been an SI.com NASCAR reporter for years. Perhaps, that is the criteria on which he was judged and ultimately dismissed.

Folks on all sides of the issue have strong feelings. Some applaud SI.com for standing up for journalism. Some believe passion for a sport can be overwhelming when a unique event occurs. Still others point to TV and the way some of the on-air personalities move back and forth between journalism, analysis and commentary.

Click here to read Tom's article at Frontstretch.com talking about this issue. In my email contacts with Tom he has always been a good guy and I wish him the best of luck in his future endeavors.