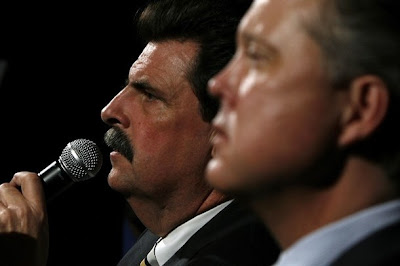 Monday, we start the NASCAR TV news season for real. SPEED has one week of Race Hub before ESPN's NASCAR Now joins the mix on Monday, February 1st. This year, fans will have the choice of two TV news programs every Monday through Thursday.

ESPN has a three year jump on NASCAR news. SPEED steadfastly refused to offer any TV news during the week, opting instead to focus on the weekend activity at the tracks. Adding Race Hub late last year on the fly showed both the best and worst results of jumping into the deep end of the NASCAR TV news pool.

So far this season, everything on Race Hub has been polite, scripted and planned. In other words, the actual racing has not yet started. The PR releases have been orderly, the smiles have been easy and Mike Helton was the featured guest on the show last week.

As with any professional sport, there are a myriad of issues and stories that the Race Hub producers can choose to feature or discard. Over the past three seasons, NASCAR Now has taken topics like Jeremy Mayfield's drug suspension, Goodyear's tire failures and the COT woes head-on without blinking.

Click here for an article discussing the subject some in the media are concerned about. Despite the claims of letting the drivers police themselves this season and that rubbing is just racing, NASCAR has stepped-up efforts to blame the media for problems within the sport.

They told drivers in closed meetings that expressions of emotion and frustration on NASCAR topics were bad for the sport. Specifically pointed out that the drivers and their public statements reported by the media were directly affecting the TV ratings. In other words, despite the social media outreach and the Fan Council mentions, NASCAR is putting the clamps on free speech.

Click here for the TDP column on Jack Roush and his recent rant against the NASCAR TV partners. He pointed directly to Darrell Waltrip and Rusty Wallace as each having a personal ax to grind on the air.

Into this delightful atmosphere walks SPEED with a brand new TV series featuring NASCAR news directly from the personalities who make it. That was a key reason the network rolled out Race Hub from the North Charlotte, NC studios. Suddenly, anyone and everyone who was in the news could take a short drive and be on national TV in the evening hours speaking to NASCAR fans directly.

SPEED's on-air track record in dealing with hard news stories is anything but stellar. Monday night's TWIN purposefully focused on highlights and refrained from reporting news. The network offered no other weekday NASCAR shows until the practice and qualifying coverage started from the tracks on Fridays.

In 2009, it was sometimes ironic that the best NASCAR news coverage was offered by The SPEED Report, a show intended to cover all forms of motorsports on Sunday nights. Meanwhile, programs from NASCAR Live to RaceDay routinely avoided hard news in favor of race preview information.

One factor in whether or not Race Hub gets credible is the host. SPEED has decided to rotate its current crop of on-air talent through this assignment rather than designate a fulltime person for the position. While names like Krista Voda and Randy Pemberton are used to dealing with news, announcers like Rick Allen and John Roberts are more in tune to directing on-air traffic.

This is a big shift of gears for SPEED. The network has not done a daily NASCAR news program in a very long time. The challenge is to see past the NASCAR edict and dive into the reality of the sport regardless of whether it might be viewed as positive or negative. Studio guests should face real questions and offer more than the PR spin on an issue.

So, after a short trial run last season and some polite conversation this year, Race Hub faces the challenge of establishing itself as a credible source of NASCAR news for the fans. Rick Allen and Randy Pemberton co-host on Monday and we'll be watching.

TDP wants your comments on this topic. To add your opinion, just click on the comments button below. This is a family-friendly website, please keep that in mind when posting. Thanks for taking the time to stop by The Daly Planet.
Posted by Daly Planet Editor at 9:00 AM 13 comments: