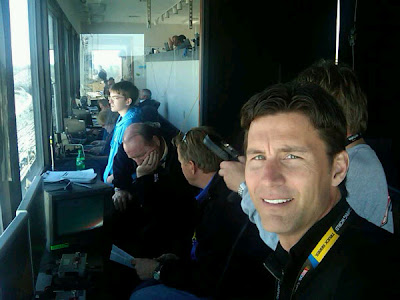 It's a tight one-day show for the Camping World Series trucks in Darlington, SC. Qualifying is on SPEED at 3:30PM for approximately one hour. Krista Voda then hosts the pre-race show at 4:30PM and the trucks race at 5PM.

Rick Allen will call the action along with Phil Parsons. Micheal Waltrip is off this week, so Larry McReynolds will call the race. I am told this is not an audition, just a guest appearance. Hermie Sadler and Ray Dunlap will handle the pit reporting.

With each passing week, the truck series looks more and more like the feeder series for Sprint Cup. While the Nationwide Series has become clogged with drivers on various agendas, the trucks continue to be the place where drivers can stand-out against good competition.

Darlington in the daylight is a reminder of old-style racing, despite the fact that the start/finish line was flipped years ago to what was formerly the backstretch. This type of track makes great TV pictures, especially from low angles when the trucks are allowed to race into and then through a "speed shot."

SPEED produces its own races in this series and has a style that is very different from ESPN, FOX or TNT. Over the years, fans have simply come to expect that this TV team will describe the action, cover the racing and let the teams take centerstage. That is almost the opposite of FOX and ESPN, two networks that thrive on TV personality-driven telecasts.

Despite his TNT gaffs last summer, Parsons continues to be the informed voice of the series and offers a perspective that can't be beat. Allen was simply abused by Darrell Waltrip at Daytona, but can pump excitement into a live telecast and that is his role. It should be interesting to see how McReynolds adapts to this series.

This post will host your comments before, during and after the block of TV truck series programming on SPEED. To add your TV-related comments, just click on the comments button below. This is a family-friendly website, please keep that in mind when posting. Thank you for taking the time to stop by The Daly Planet.