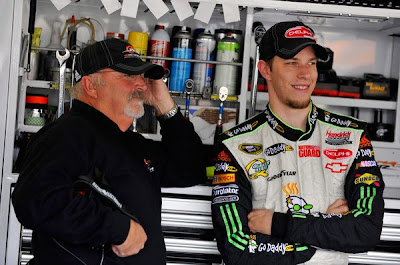 Here we go with another college football Saturday. On ESPN2, Iowa is playing Arkansas State and the game started at noon ET. NASCAR Countdown is scheduled for 3PM and the Nationwide Series race itself is at 3:30PM.

Allen Bestwick is poised to kick off the coverage with Rusty Wallace and Brad Daugherty alongside. This trio is reliable, dependable and excitable. As you can see from the picture above, Tony Eury Sr. is back in the Keselowski pit this week after getting injured in a Charlotte area auto accident recently. Good news.

Marty Reid is back and perhaps this week Dale Jarrett will be back on his game and give fans a feeling for what he can really do on TV. Andy Petree is always solid, but Jarrett is the star of this show and he needs to shine.

This is going to be a race filled with great stories due to a wide variety of circumstances. Sprint Cup Series veterans are mixed with rookies out to make a name for themselves and several Nationwide regulars just trying to hold on for the rest of the season.

The ESPN pit reporting corps of Jamie Little, Shannon Spake, Vince Welch and Dave Burns will be covering the live action. They may have to hustle as this big and fast track is known for producing a lot of incidents, especially with the scenario building for this race.

The ESPN production team is not slaved to a Chase format for these events and normally does not use all the bells and whistles available to them. Several Nationwide Series races produced by the team this season have simply been fun to watch. Hopefully, Kansas will join that list.

The battle for ESPN this season on shared weekends it that the Nationwide race becomes suddenly a bother. In fact, this series often produces much better racing than the its Sprint Cup big brother. Translating that to TV by giving it the same level of attention as the Sunday event is the challenge.

This post will update in the comments section the transition between the college football game and the NASCAR telecast. ESPN has a bad habit of waiting until the last minute to inform viewers of what is happening. The best guess is that ESPN Classic will once again get a visit from Allen Bestwick and company.

To join our discussion, just click on the comments button below. This is a family-friendly website, please keep that in mind when posting. Thanks for taking the time to stop by.
Posted by Daly Planet Editor at 2:15 PM 381 comments: 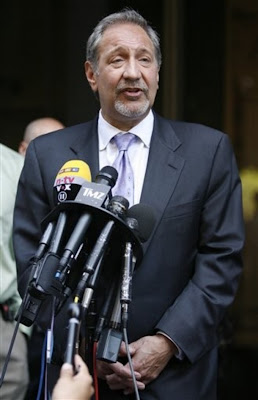 Let's face it. Recent developments in the world of NASCAR's highest-profile drug policy offender have made it clear that the media is once again about to get a big taste of Jeremy Mayfield.

Never wavering from his story of mistaken lab results, Mayfield has made a move right out of a Hollywood script. Click here to read Jenna Fryer's story for the Associated Press. Mayfield has a brand new mouthpiece.

This time, instead of the wild-haired local Charlotte, NC attorney Bill Diehl, Mayfield has his eye on a very big prize. Pulled right out of the celebrity arena is Mark Geragos, who is pictured above.

While the Geragos focus will be squarely on NASCAR's drug testing policies, his reputation as a celebrity lawyer will certainly be put to the test. The Mayfield disaster has played out over the last months in front of an increasingly agitated NASCAR fan base.

It has been a saga where every move has a counter-move and there now seems to be no winners. NASCAR has been offering official statements about Mayfield from a cast of characters right out of a bad Burt Reynolds movie.

Through it all, Mayfield has been doing the one thing that media veterans know is going to come around again like bad meatloaf. Mayfield has talked about it publicly and is making a point to remind fans. There is always a video camera rolling when Mayfield is in action. He is recording everything.

Talking to ESPN's Marty Smith on top of a hospitality trailer in the infield...recorded.

Talking to local Charlotte TV stations from the driver's seat of his SUV...recorded.

Answering the door when the NASCAR drug police came to his house demanding a urine sample...recorded.

Mayfield has now sold his race team and says he is having a hard time making ends meet because NASCAR has denied him a right to make a living racing. Mayfield has thrown NASCAR, the Aegis testing lab, and the entire multi-million dollar NASCAR drug testing program under the bus time and time again.

You have to feel that the end result of all of this just has to be one thing. Mayfield's own reality TV series. From Housewives to fisherman to the Octomom, reality TV dominates our media world right now. SPEED promotes towing trucks in Chicago and the History Channel promotes people driving trucks in very cold places.

While we wait for the next chapter in the Mayfield saga to play-out, the other big problem he has is that so many titles have already been used for reality shows that feature drugs, alcohol, family issues and money problems.

Throw in the drunken stepmom who might or might not have killed Mayfield's father. Add Mayfield's wife who has already starred in an earlier NASCAR reality TV show. Finally, include the celebrity lawyer who has represented clients like the late Michael Jackson, Chris Brown and Winona Ryder.

There is little doubt that Mayfield will be shopping for a reality TV deal to put money in his pocket. In TV land, even projects in the development stage have a name.

Since we have so many smart and imaginative NASCAR fans out there, let's ask for your opinion. What should Mayfield's possible new reality TV series be called?

While it may seem easy at first, it is not. The title has to be short and sweet but to the point. It has to reference Mayfield, but not necessarily NASCAR. Creativity is great, but non-racing fans have to understand it as well.

To add your comment to this post, just click on the comments button below. This is a family-friendly site, please keep that in mind when posting. Thanks for putting on your creative hat and taking the time to stop by.
Posted by Daly Planet Editor at 12:30 AM 68 comments: