Your Turn: Sprint Cup Series From New Hampshire On ESPN 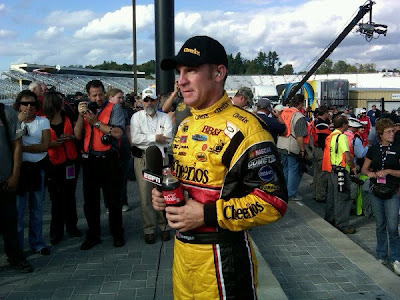 With the NFL season underway, the NASCAR pre-race show was moved to ESPN2. After the NFL coverage was over, the race began on ESPN.

It was Allen Bestwick hosting from the Infield Pit Studio with Ray Evernham, Rusty Wallace and Brad Daugherty. The show did not contain the kind of long pre-recorded features seen in the last three pre-race shows. That allowed the analysts to offer more opinions and the pit reporters to do more interviews.

Marty Reid called the race with Dale Jarrett and Andy Petree from the TV booth. Dr. Jerry Punch, Vince Welch, Jamie Little and Dave Burns were the pit reporters. Tim Brewer was in the Tech Garage.

The Chase was the theme of the race telecast from the start and overshadowed the actual race. Mixing coverage of the Chase and the race has proven to be a tough task for ESPN.

The actual racing on the track was typical short track action with the battles for position causing accidents in the corners. The weather was great and there were no technical problems from the TV crew.

This post will let you offer your TV wrap-up comment on the ESPN coverage of the Sprint Cup Series race from Loudon. To add your opinion, just click on the comments button below. This is a family friendly website, please keep that in mind when posting.
Posted by Daly Planet Editor at 12:30 AM 48 comments: