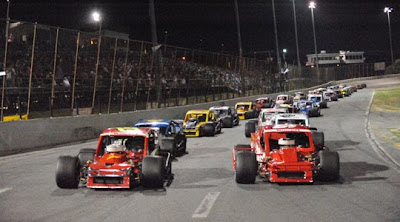 The Whelen Modifieds were a big hit earlier this season when Mike Joy and Dick Berggren called the inaugural race from Bristol, TN. Well, this time the nerf bar clanging will be done at New Hampshire Motor Speedway .

Joy and Berggren return at 1PM ET with coverage of the Mods on SPEED. This race may be the best of the weekend as this series is designed for the flat tracks with the big tires and low-slung chassis.

There are forty cars ready to go with familiar names like Donny Lia and Mike Stefanik. On the pole, however, is an 18 year old college freshman named Ryan Preece from one of my favorite towns, Berlin, CT. Click here for that story from Shawn Courchesne's great auto racing blog in the Hartford Courant.

Once the Mods are done, Krista Voda will be up at 2:30PM with The Setup. There are some hot tempers and hard feelings in the Camping World Truck Series these days. Several controversial moves from last week resulted in penalties and several wrecked trucks. Click here for an update on that topic.

Instead of Johnny Benson, Michael Waltrip will be teaming with Rick Allen and Phil Parsons to call the action at 3PM. The transition from Benson to Waltrip should be rather dramatic, especially with all the intensity of last week possibly coming to life once again in this event.

There are 36 trucks entered for the race, including some familiar faces. While the truck series regulars from last week's drama are back, this race will also feature Kevin Harvick, Max Papis and flat track ace Dennis Setzer. There will be some start-and-park trucks, but the names in the field should make for a solid event.

SPEED will start the day with CWTS qualifying at 10AM. The same broadcast team will be present, including the only two-reporter combination to work an entire pit road. That would be the versatile Adam Alexander and the always colorful Ray Dunlap. These two just flow through the sport with the same grace of Voda in the pre-race.

For those of you in search of a nightcap, ESPN2 will try to squeeze in a same day delay broadcast of Sprint Cup Series Happy Hour at 6:45PM between college football games. That would be Jerry Punch, Dale Jarrett and Andy Petree in the booth. Best of luck with this effort and yes, we will be watching.

TDP will live blog the Mod and CWTS race on Saturday, but in the meantime please feel free to leave us your TV-related opinion on these topics. To add your comment, just click on the comments button below. This is a family-friendly website, please keep that in mind when posting. Thank you for taking the time to stop by.
Posted by Daly Planet Editor at 11:00 PM 11 comments:

Here we go with a brand new twist for NASCAR and its TV partners. Versus has now joined the group and here is the official info:

VERSUS today announced a multi-year deal with NASCAR to air a fast-paced, up-close HD look at the 12 drivers competing in NASCAR’s 10-race Chase for the Sprint Cup. The weekly, half-hour series titled Quest for the NASCAR Sprint Cup will air on VERSUS on Tuesday nights at 11 p.m. ET, beginning September 22, and will air each week until the conclusion of the 2009 NASCAR playoff season.

Quest for the NASCAR Sprint Cup, an adrenaline-filled show that offers motorsports fans stunning race footage with an intimate behind-the-scenes perspective, is a milestone in HD sports programming and was honored with a Sports Emmy® Award for “Outstanding Live Event Turnaround” in 2008. VERSUS and NASCAR will also partner on additional programming opportunities which will be announced when details become available.

“Just as we’re about to conclude our first year of IndyCar Series coverage, we look forward to the opportunity to extend our racing season through this new partnership with NASCAR,” said Marc Fein, Executive Vice President of Programming, Production and Business Operations for VERSUS. “VERSUS has become a top television destination for motorsports fans with our in-depth and all-encompassing coverage of the IndyCar Series and we are very excited to launch into a multi-year venture with NASCAR to showcase all the action and excitement surrounding their championship run.”

“We are delighted to partner with VERSUS on our Emmy-award winning Quest for the NASCAR Sprint Cup series,” said Jay Abraham, Chief Operating Officer of NASCAR Media Group. “With VERSUS being the fastest growing sports cable network in the country, this is one more way in which NASCAR can reach additional fans with the excitement of our playoffs, the Chase for the NASCAR Sprint Cup.”

This is an interesting announcement to make on the verge of the first Chase race in New Hampshire. The NASCAR Media Group is extending a new bridge and the results should be fun to watch. There was no reaction from SPEED or ESPN on this issue.

Some fans may remember this series from an earlier network partnership. NMG enjoys making high-end glossy programs that have the feel of an NFL Films production. While this content will still not be available online, any additional exposure for NASCAR on TV is a positive for the sport.

We will continue to follow this story, but in the meantime perhaps you can give us your reaction on this topic. Just click on the comments button below to add your opinion. This is a family-friendly website, please keep that in mind when posting.

Thank you for taking the time to stop by The Daly Planet.
Posted by Daly Planet Editor at 1:30 PM 45 comments:

One Eye On Qualifying And The Other On Danica 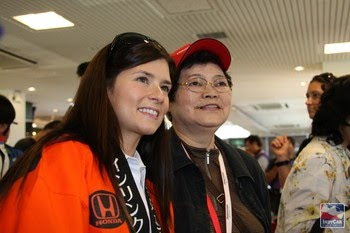 While SPEED will start the day off at 12PM ET with Sprint Cup Series practice, the big moments will happen when ESPN2 hosts qualifying at 3PM. Jerry Punch, Dale Jarrett and Andy Petree will be calling the action for this very important session.

Passing has been tough with the new Sprint Cup cars at NHMS. Two key ingredients that have played important roles in the outcome of the race are qualifying and pit stops. Now that the Chase is underway, there will be the drivers with everything to gain and those with nothing to lose both seeking to start at the front of the grid.

After qualifying, Mike Massaro comes along with a thirty minute edition of NASCAR Now scheduled for 5PM. SPEED is next as Mike Skinner and Denny Hamlin guest on Trackside at 7PM. That show has Steve Byrnes hosting with Jeff Hammond, Elliott Sadler and Larry McReynolds on the panel. This weekend, McReynolds will stick around and substitute for Kenny Wallace on Sunday's Victory Lane. Wallace returns to the program next week.

The other big Friday attraction is the IRL race from Motegi, Japan on the Versus TV Network live at 10:30PM ET. Stories are now beginning to creep into the mainstream NASCAR media that fans may well see Patrick in NASCAR next season. Could that start in Daytona next February with Patrick running both the Camping World Truck and Nationwide Series races?

With the IRL not opening their 2010 season until March 14 in Brazil, there is an opportunity for her to attempt three Nationwide and two Camping World Truck Series races before that weekend. Click here for a recent article quoting Tony Stewart as confirming that Patrick is determined to make the transition to NASCAR.

Motegi was the scene of a hotly debated win for Patrick last season. It has been her only win on the IRL trail since she joined the sport in 2005. She has 79 IRL starts in her career and has finished 67 of those races. While not at the top of the heap, she continues to just hang-in there this season, currently 5th in points.

It will be the familiar voice of Bob Jenkins that welcomes curious NASCAR fans to Versus. Jenkins anchors the coverage with Jon Beekhuis and Robbie Buhl as the analysts. On pit road will be the veteran Jack Arute along with reporters Lindy Thackston and Robbie Floyd.

Ironically, the IRL coverage on Versus is produced by Lingner Group Productions based in Indianapolis, IN. The head of that company is Terry Lingner, the original producer of NASCAR on ESPN back in the 1980's. His director back then was Mike Wells, who many of you enjoyed as he directed the TNT NASCAR coverage this season. It's a small world in motorsports TV land.

Believe it or not, the IRL only has one other race remaining. The series comes to Homestead and races on October 10 with that telecast also on Versus. Should Danica give a good accounting of herself in these two final events, it may go a long way toward helping current NASCAR fans figure out if she is the real deal or just another open-wheeler with big dreams.

So, Friday will answer two questions. Number one, will a racer or a Chaser get the pole in New Hampshire? The second is can Patrick can turn up the wick and get back-to-back wins in Japan? That would launch her part-time NASCAR career in style. Both programs should be interesting to watch for very different reasons. Will you be watching one, none or both?

TDP welcomes your comments on these topics. To add your TV-related opinion, just click on the comments button below. This is a family-friendly website, please keep that in mind when posting. Thanks for taking the time to stop by.
Posted by Daly Planet Editor at 7:00 AM 31 comments: