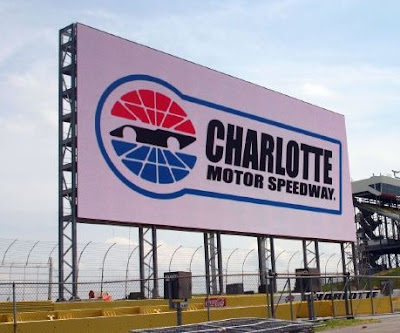 The final part of a motorsports tripleheader is on FOX. After F-1 on SPEED and IndyCar on ABC, it's time for NASCAR's longest race.

This post will serve to host your comments on the race telecast. To add your TV-related opinion, just click on the comments button below. Thanks for stopping by.

Currently my internet access is limited, so please be patient. 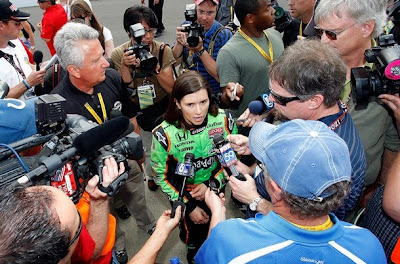 There is really only one IndyCar race that screams for national attention these days. Between the street circuits and the ovals, the Indy 500 seems to stand-alone as what open wheel racing used to be.

This year, Brent Musburger is hosting the ABC telecast once again. No one really knows why Brent is there or what he does. ESPN tried to put Brent in the very same role with several key NASCAR races and the results were not good.

In the end, Musburger snuck back into his stick and ball world for good. Only Indy remains as his racing moment in the sun. There are many other ESPN personalities that would be great in this role. The one that comes to mind right away is Dr. Jerry Punch. This is the type of role that fits him like a glove.

Instead, Punch will be on pit road with Jamie Little, Vince Welch and Rick DeBruhl. That group will be doing the heavy lifting for Marty Reid, Eddie Cheever and Scott Goodyear. Cheever is the character of this group, constantly disagreeing with everything Goodyear says and loving every minute of it.

Reid has been having a tough season on the NASCAR circuit. His lack of perspective has hampered him in his play-by-play role. I first met Marty back when he was deeply involved with off-road racing and bringing that sport to TV. Since then, he has worked both the NHRA and Indy Car series for ESPN.

Getting back to an IndyCar race might be just the right thing for Reid, but the executives at ESPN have to take a long and hard look at putting Reid back in the booth for the seventeen Sprint Cup Series races that network will carry beginning in July.

Former producer Neil Goldberg is gone from ESPN. It was Sr. VP Jed Drake that handled the pre-race publicity and answered the telecast questions. It should be interesting to see just how the race looks with Drake in charge.

The TV team has 64 total cameras for the telecast, including 12 cars that have multiple angle in-car cameras. The infamous bat-cam is also back. That is the little gizmo mounted on a wire that runs from the beginning of pit road down into Turn 1. It is used to zoom alongside of cars on restarts and offer pit road coverage.

NASCAR fans are used to safe races. Despite the improvements at Indy, this is going to be a telecast where the risk of injury to a driver or fans is a very real possibility. Several big accidents last year opened a lot of eyes, but the series is still not blinking.

IndyCar CEO Randy Bernard is still going to make the field utilize double-file restarts. The drivers are livid about this and it has become a huge issue. Once the race is in progress, there are "marbles" of rubber that build up outside the single groove in the corners. Literally, there is no way to run two-wide.

At the start and for tradition, the field will go wide on the green track. Unfortunately for those of us who can remember the incidents we used to see at the speedway on restarts, this year's race could bring back those old memories. The drivers requested single-file and Bernard said no.

Update: Robin Miller of SPEED announced at 10:30AM today that Randy Bernard has reached an agreement to restart the race differently today. It seems that the green will come out when the cars come off turn four and the field may well be single-file. Stay tuned on this topic.

The race has many great stories including several female drivers, some long-shots and lots of favorites. The media leader is Danica Patrick, who has been under the radar this week. After struggling early on, she finally qualified but never looked like a contender.

Typically, this race has early drama and danger and then settles down to a slow and single file pace while the remaining cars work on handling and fuel mileage. Then, business picks-up in the closing segments as teams maneuver to get themselves in contention.

Keep an eye on the crowd. No one is making predictions but between the price of gas, the rough economy and the outrageous hotel costs in the entire Indy area, it could be a real eye-opener.

This post will host your comments on the ABC coverage of the Indy 500. To add your TV-related comments, just click on the comments button below. This is a family-friendly website, please keep that in mind when posting. Thanks for taking the time to stop by The Daly Planet.