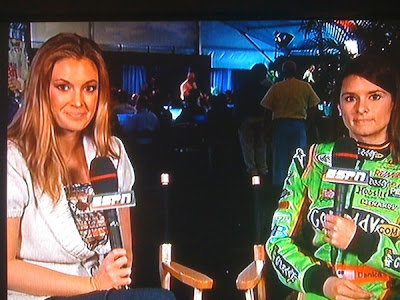 The dynamic of NASCAR and the world of new media technology continues to unfold as the Daytona International Speedway prepares for media day.

This is a tightly controlled progression of drivers trudging through the media gauntlet. Aside from various print and radio interviews, there will be three different media companies presenting video of the event. Two of them are active NASCAR TV partners and the third is an online group.

NASCAR.com is operated by Turner Interactive from Atlanta, GA. Among other things, this group holds all the rights to NASCAR video on the Internet. Yes, they control what video is allowed to be posted anywhere, including YouTube and other sites.

This year, NASCAR.com will be originating a live online webcast beginning at 8AM ET. Click here for the direct link to open that window. Hand-in-hand with NASCAR, the website should be able to supply fans a full day of interesting pictures and sound.

Here is the official information on this coverage:

Fans can participate in Media Day by submitting questions via Twitter for the hosts to ask drivers as they cover the Media Day action. Submit questions for your favorite driver at NASCAR's Twitter account: www.twitter.com/NASCAR

So, the first team out of the blocks and "on the air" with coverage will be the in-house crew from NASCAR itself. This will allow fans away from a TV to gain access to exactly the same content being offered to the mainstream media.

Meanwhile, ESPN is scrambling to get this season started on a good note after the rough end to 2009. ESPNEWS will present three hours of live coverage starting at noon ET with Nicole Briscoe hosting from Daytona.

Mike Massaro will be back in the ESPN studios and Ricky Craven will be along to offer his comments on the topics of the day. Segments with Craven and Massaro in the studio will allow Briscoe in Daytona to get reset with the next guest.

This is a nice big block of time for ESPN to dedicate to the sport. Later, at 6PM there will also be a full thirty-minute version of NASCAR Now on ESPN2 with the same cast of characters. The 6PM start time is to avoid conflict with live Bud Shoot Out practice being televised on SPEED at 5PM for one hour.

Speaking of SPEED, John Roberts and Wendy Venturini will offer a recap of the media day activities airing at 7:30PM ET for ninety minutes. SPEED is skipping the live coverage to basically promote itself. NASCAR Live at 4PM will feature a host of SPEED announcers from Dave Despain and Ken Squier to Steve Byrnes and Jimmy Spencer. Expect everyone to say hello and offer a thought or two on the new season.

Since SPEED is airing both Thursday Shoot Out practice sessions at 5 and 6:30PM, it leaves little room for media day content until later in the evening. The complete TV schedule for the entire weekend is on the right side of the TDP main page.

This post will serve to host your comments about the three sources for media day video on Thursday. Please tell us what you watched, how you enjoyed the content and whatever other observations you have on the presentations.

To add your opinion, just click on the comments button below. This is a family-friendly website, please keep that in mind when posting. Thank you for taking the time to stop by The Daly Planet.
Posted by Daly Planet Editor at 4:45 AM 44 comments: 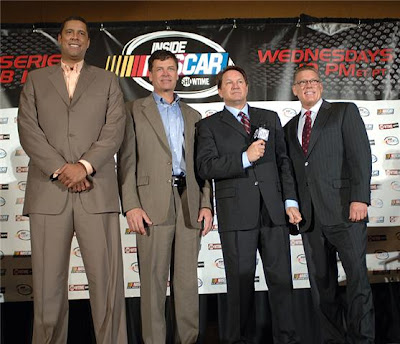 When it became clear that SPEED was ending the 14 year run of This Week in NASCAR, it was sad. Other than ESPN's Monday afternoon offering, there was no NASCAR weekday talk show that featured conversation and debate about racing topics. Then, Showtime answered the call.

Click here to review the NASCAR.com post announcing that Inside NASCAR would begin on Showtime in February and offer a Wednesday hour talk show. Ultimately announced as the cast was Chris Myers, Brad Daugherty, Randy Pemberton and Michael Waltrip.

Cable TV networks like SPEED, TNT and VERSUS are in well over 70 million homes in the United States. Showtime serves around 17 million. In NASCAR TV terms, they are tiny. Throw in Showtime's mature-themed entertainment programming and suddenly there was a situation brewing.

The question was, will NASCAR fans be able to see Inside NASCAR on what is called an "a la carte" basis. That means being able to break-out a single program or series from a network for viewing. Basically, without subscribing to the Showtime network, could fans access Inside NASCAR? Luckily, that point was quickly addressed.

Here is an excerpt from the Sports Business Journal's Michael Smith addressing those points:

Since that time, we have been communicating directly with Showtime to get updates on just how fans could access the new TV series and what costs might be involved. Tuesday (Jan 26, 2010), we got our answers from the premium network. It was not good news.

First of all, Inside NASCAR will not be available via cell phone. Showtime as a TV network is still not available in that fashion. So, the company is simply not going to break out Inside NASCAR on an "a la carte" basis. The cell phone or hand-held device option is out.

Then came the big news. "We do not offer full episodes of any Showtime programs online," the network told TDP via email. While episode 1 of this series will be posted at SHO.com as a preview, none of the additional episodes will be available online.

It's understandable that Showtime has a business to run and getting new subscribers is the number one priority. But with no actual races, few other sports and an adult-themed line-up of premium programming, Inside NASCAR may wind up only being seen by that portion of the current 17 million Showtime subscribers who are race fans.

Perhaps, the NASCAR Media Group may yet play a role in getting online distribution for this product. After all, they developed, pitched and sold the TV series to Showtime. Now, NMG is getting ready to produce it at its new Charlotte-based studios.

It may well be in NMG's own best interest to have another round of conversations about getting the only weekday primetime hour of NASCAR conversation on any kind of national TV out to a broader audience. The series debut is February 10.

We welcome your comments on this topic. To add your opinion, just click on the comments button below. This is a family-friendly website, please keep that in mind when posting. Thanks for taking the time to stop by The Daly Planet.
Posted by Daly Planet Editor at 4:30 AM 43 comments: