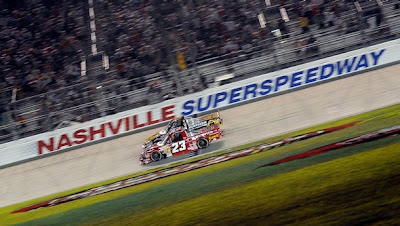 Krista Voda starts the telecast off for SPEED with the pre-race show from Nashville at 7:30PM. Ray Dunlap and Adam Alexander are the reporters.

Rick Allen, Phil Parsons and Michael Waltrip are going to call the race. This trio is going to be faced with a limited field that may struggle a bit to put on a good event. Most fans are well aware of the economic challenges that have put a real dent in this great series.

Look for SPEED to keep the emphasis on the racing at the front of the pack among the fulltime competitive teams. This is a good track for the trucks and fits the profile of the series when it was first created.

SPEED has long used the old school approach to this racing coverage. No gimmicks or gizmos, just coverage of the event as it unfolds with the emphasis on the teams and the drivers.

Waltrip brings his colorful personality to the coverage and can be a tremendous asset or a tough liability. Left to wander into sponsor-driven commentary, Waltrip takes himself out of the telecasts with his shilling. When he is focused on the race and focusing the attention on the track, Allen can get some great analysis from this veteran.

This post will serve to host your comments about the CWTS coverage from Nashville on SPEED. To add your TV-related comments, just click on the comments button below. This is a family-friendly website, please keep that in mind when posting. Thanks for taking the time to stop by.
Posted by Daly Planet Editor at 7:00 PM 152 comments: 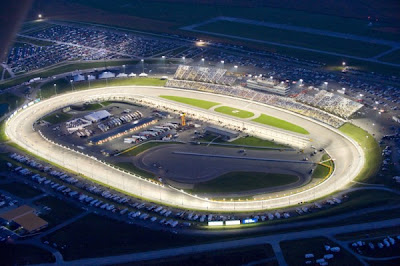 This is truly going to be a NASCAR telecast to watch from start to finish. A lot of things are going right for ESPN and the results could be one of the best Nationwide Series races in a very long time.

With Jerry Punch and the rest of ESPN's Sprint Cup Series broadcast team in Pocono, it will be Marty Reid, Randy LaJoie and Rusty Wallace handling the inaugural Nationwide Series race from Iowa Speedway. On pit road will be veterans Mike Massaro, Jack Arute and Rick DeBruhl.

For those who missed the earlier TDP posts about this event, extra grandstands have been brought in to expand the size of the sold-out crowd to slightly over 55 thousand. You read that right. 55 thousand fans on a Saturday afternoon for a Nationwide Series race.

Rusty Wallace connections are all over the place. He designed the track, is a part-owner and his two-car Nationwide team includes his son Steven. There should be little doubt that Steven's guys are going all out to see if he can win this event.

Marty Reid has been just what ESPN needs to get the Nationwide Series through the end of the season. His great sense of humor and ability to make things exciting really works well when he gets both Wallace and LaJoie fired-up.

Wallace has really gotten a new lease on life as the analyst on this team and does a completely different job than his earlier appearances in the analyst role with Punch on the Cup side. This should be a good challenge today for Wallace to balance all four roles as track developer, series owner, father and TV analyst.

Look for the ESPN team to keep it simple. No gizmos on the telecast, few recorded driver soundbites played-back during the action and a focus on the best racing on the track. This has all the potential to be a blast for the fans.

This post will serve to host your comments on the Nationwide Series telecast from Iowa on ESPN. To add your TV-related comments, just click on the comments button below. This is a family-friendly website, please keep that in mind when posting. Thanks for stopping by.
Posted by Daly Planet Editor at 3:25 PM 296 comments: 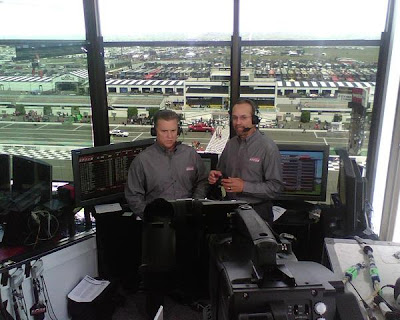 Emailers wanted an opportunity to talk about Kyle Petty working on the ARCA Series race on SPEED. Here it is. Steve Byrnes is calling the race with Wendy Venturini and Jim Tretow on pit road.

Thanks to Rutledge Wood for the picture of the SPEED crew. To see the picture full-size, just click on it. To add your TV-related comment on the ARCA race, just click on the comments button below. This is a family-friendly website, please keep that in mind when posting.

Thanks for taking the time to stop by The Daly Planet.
Posted by Daly Planet Editor at 1:02 PM 62 comments: