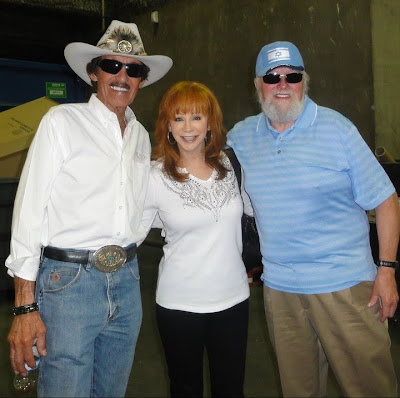 Here are some TV and media notes that have come through the mailbox this week:

Update: Big media story breaking Wednesday. Former driver Jeremy Mayfield has been arrested for possession of methamphetamine. Authorities went to Mayfield's house with a warrant to look for stolen property. During the search, they found the meth. Lots of online stories already published, it will be interesting to see how ESPN and SPEED report it.

NASCAR is trying a new approach to the Sprint Cup Series banquet. Reba McEntire will be the official host and also the featured performer. Reba's son, Shelby, is teaming up with Roush Racing to co-drive a Grand-Am entry in 2012. Reba has appeared at other NASCAR races to sing the national anthem and is reportedly a fan of the sport.

The wild action at Martinsville seems to have reaped one benefit for the sport. The Sunday race got a 3.6 cable household rating which puts the race over 5 million total viewers. Last year, with the sport in a mess, the race on ESPN got a 2.8 rating. This is a substantial increase at a critical time.

The hot news that perhaps David Reutimann was out and Mark Martin was in at MWR for 2012 came in a little late for the ESPN folks at NASCAR Now. I was told the Tuesday show was recorded earlier in the day, several hours before the 3PM air time. Over at SPEED, Bob Dillner came to the RaceHub studio and updated the news.

Our friend Phil Allaway over at Frontstretch.com took on several issues about the ESPN telecast. Here are some excerpts:

"One of the biggest stories that came out of Sunday’s race was the fact that Travis Kvapil’s jackman, Sean Irvan, was hit on pit road during a stop by Mark Martin. Irvan suffered a concussion. However, based on ESPN’s coverage, I had no clue that this injury had occurred. I didn’t learn about it until after the race had already finished."

"Look, I know that Kvapil’s No. 38 team would almost never fall within the top-24 rule that Shannon Spake so eloquently described to me back in 2009. However, when something such as what happened to Irvan occurs, that is an extenuating circumstance, as far as I’m concerned. The script must be broken and the incident reported on. It is your duty to do so. Maybe ESPN doesn’t have any video that shows what happened. I don’t care. If you don’t have any video, tell the audience that you don’t have video, but still bring up what happened. Tell the viewers what went down, and provide updates. I’d like an explanation as to why a story such as this one was missed on the telecast."

Phil brings up a great point. Once again, an important story that ESPN was certainly aware of was not reported by choice. It made little sense to NASCAR fans.

The Sprint Cup Series race from Martinsville will re-air on SPEED at noon ET Wednesday in a three hour timeslot. NASCAR Now will be at 3PM on ESPN2 and RaceHub will be at 6PM on SPEED.

It's a tripleheader weekend, so the SPEED gang with Rick Allen, Phil Parsons and Michael Waltrip will call the truck race on Friday night from the Texas Motor Speedway. Marty Reid will team with Dale Jarrett and Andy Petree for the Nationwide Series race on ESPN2 Saturday. Jarrett and Petree return with Allen Bestwick for the big Sprint Cup Series race on ESPN Sunday.

The DirecTV deal with FOX being done has resulted in very little information being released to the public or the media. As usual, both sides seem to have given in a bit to get the job done. DirecTV gets a broad renewal of many FOX TV properties, including the FOX News Channel and the local TV stations. FOX most certainly got a higher price for those properties from DirecTV. We will keep an eye on whether or not those costs are going to be passed along to DirecTV subscribers soon.

The latest update on Rick and Linda Hendrick is that they are back in North Carolina after the plane crash in Key West. Mr. Hendrick has a broken collarbone and rib. His wife has bumps and bruises. Both pilots, who work for Hendrick Motorsports, also returned to Concord, NC. There has been no explanation for the brake failure on landing. Jimmie Johnson, co-owner of the plane, said that is the jet he and his family fly regularly on to and from the races. Both NASCAR TV news shows did a good job of keeping viewers updated on the story.

Update: Mike Massaro reported on NASCAR Now that after being evaluated in Charlotte, Rick Hendrick was found to have four broken ribs in addition to a broken collarbone. He was admitted to a Charlotte area hospital for observation and is expected to be released in a couple of days.

Some random TV notes: Matt Kenseth was at ESPN on Tuesday. These trips are a waste of time now that NASCAR Now airs at 3PM and has no repeat. Kenseth appeared for a liveshot on SportsCenter, but the exposure for all the effort did not make sense. The guest on PTI was Peter King from SI.com and Kenseth was not featured on any other talk show.

There have been no announcements from ESPN about the TV line-up for next season. Rusty Wallace is re-signed through the 2014 end of the current contract. Brad Daugherty and Carl Edwards are the two names in play. Edwards is reportedly joining ESPN to work the Nationwide Series races, what role Daugherty will play in 2012 has yet to be confirmed.

Trackside on SPEED will once again be Rutledge Wood, Kyle Petty, Jeff Hammond and Marianela Pereyra from Texas. SPEED has confirmed that this will be the line-up for the rest of the season. Pereyra's four show deal was recently extended through the season. No word on whether Trackside will return for 2012 just yet.

We will update this post if any other TV/media information comes along on Wednesday. In the meantime, please click the comments button to add your opinion on any of the topics mentioned above. Thank you for taking the time to stop by The Daly Planet.