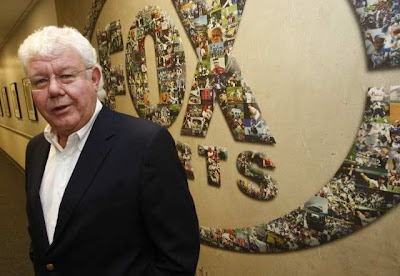 It was just a little Monday night reception and hospitality event on the Charlotte Media Tour. The new president of FOX Sports, Eric Shanks, was meeting the NASCAR media. Along with Shanks was Patti Wheeler, who has taken over the programming and production departments at SPEED.

The elephant in the room was the colorful Aussie who is never at a loss for words where his opinions on NASCAR are concerned. FOX Chairman David Hill recently gave up the day-to-day management of FOX Sports to Shanks, but in return took over the SPEED network and immediately installed Wheeler to begin his revamp.

Veteran reporter Dustin Long was at the reception and offered this recap of Hill's comments on a variety of NASCAR topics. Here are the TV and media-related responses.

On the focus of the TV coverage this season:

"What this sport is all about is the driver. Everything else in NASCAR is an afterthought. People follow the sport because the drivers are heroes because that’s what the fans want to hear, superheroes that can do things that only very, very few people can or will. Anyone can be a crew chief. Anyone can be a tire changer. Anyone with the technical ability. Just think about what it takes to drive a car 200 miles an hour. ee sports: Mountain climbing, bullfighting and auto racing. All the rest of the games."

How FOX/SPEED will accomplish this new focus:

"Fox is going to concentrate on the driver, too. Right across the board. We’re putting the emphasis back where it belongs on the driver. We probably haven’t utilized Darrell (Waltrip’s) inner knowledge enough. Darrell is the only one on our (announcing) team, in reality who is a champion. He understands the motivation and what goes on. I don’t know. Is it instinct or is it skill? This is something that I’ve talked to the Alain Prosts about and the Jackie Stewarts. What is it? There’s something that drives them. What we’re going to be doing at Fox and what we’re going to be doing at SPEED is telling stories of drivers."

After confirming FOX would not offer an extended post-race show, Hill talked about his idea for a perfect Sprint Cup Series telecast format:

"Four hours (total). I think that probably 30-40 minutes to set it up, do the race and then tell the story of the race in 15 minutes. That was the beauty of SPEED to take the viewer across there to do that analysis."

Hill offered his idea on the perfect NASCAR tripleheader weekend for TV:

In wrapping up, Hill confirmed he would like FOX to remain in the sport but said NASCAR is not the same kind of value as it used to be. He also addressed the issue of online streaming of races. FOX delivers the Sprint Cup Series races over-the-air and Hill has steadfastly maintained that there will be no streaming of races to protect the FOX local stations.

Unfortunately, it seems that no media member asked Hill or Shanks about RaceBuddy. This online technology used for the TNT races is a companion to the race, offering individual cameras, social media conversation and a designated pit reporter for online viewers.

RaceBuddy does not replace the telecast, but expands the viewer's ability to get more information and have more options. The one clear purpose RaceBuddy would serve for FOX is to provide an opportunity to view racing action while the broadcast network is in commercial break.

There are no plans at this point to offer side-by-side commercial breaks on the Sprint Cup Series races. A spokesman for Turner recently confirmed there are no plans in place at the present time to offer RaceBuddy on the FOX or ESPN telecasts.

Turner, TNT and NASCAR.com are scheduled to have a media tour function on Thursday, so perhaps some news will come from those parties in reference to some of these issues.

Hill is a character right out of central casting. A brash Aussie, his statements are often confusing given his track record. Here is a man who inserted Digger right over the top of live Sprint Cup Series telecasts, taking away from the focus on the drivers and the race.

Now, Hill is gruffly saying that the focus must be on the drivers and that TV will lead the comeback by example. Few can forget the endless hawking of Digger by Darrell Waltrip on FOX and SPEED telecasts. The same Waltrip who now supports Hill's driver focus once showed-up for a Trackside telecast with a life-size Digger character driving a golf cart. How many times did DW mention Digger merchandise was available on his website?

Hill also was adamant about later start times and eventually pushed through sweeping changes that altered the entire landscape of the sport nationwide. Now, he offers that his perfect start time scenario for Sprint Cup Series races is 1PM local and is suspicious of NASCAR's pending changes.

Sports TV is made up of colorful characters and Hill fits the bill. Love him or hate him, FOX has played a major role in the television development of NASCAR and SPEED is the only TV network located in Charlotte, NC. It should be interesting to see what this season brings from Hill and the gang.

This post is meant to allow your comments on this topic. To add your opinion, just click on the comments button below. This is a family-friendly website, please keep that in mind when posting. Thanks for taking the time to stop by The Daly Planet.

Click here to read Dustin's story in full. Thanks to Hamptonroads.com for the link.