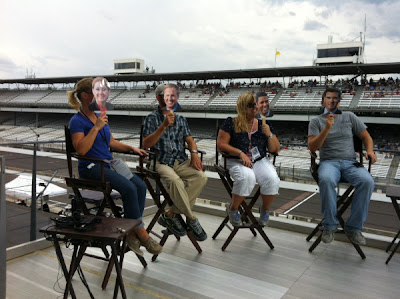 This is the ESPN pre-race show position for the Brickyard 400. The faces represent the talent assigned to the chairs and the ESPN employees are doing what is called "camera blocking." They are allowing the lighting techs, cameramen and the director to run through the pre-race script.

The Saturday script was Danica Patick. The pre-race show featured Katie Couric interviewing Danica. In the race, Danica started in the back of the pack and eventually crashed out in a self-induced moment that her crew chief Tony Eury Jr. called stupid driving. So much for the script.

The Sunday script is yet to be revealed, but it is believed to rotate around the prestige of the race. There is no Danica and no clear-cut favorite or emerging storyline this season. Former Indy 500 winner Sam Hornish Jr. is in the race, former Brickyard 400 winner Jeff Gordon needs a win and ESPN TV darling Carl Edwards is having a terrible season. Those are likely candidates for mentions.

Nicole Briscoe gets Ray Evernham, Rusty Wallace and Brad Daugherty on the pre-race show. Allen Bestwick has Dale Jarrett and Andy Petree up in the TV booth. Jamie Little is off, so Mike Massaro will be joining Dr. Jerry Punch, Vince Welch and Dave Burns on pit road. There is no more Tim Brewer or his Tech Garage.

TV coverage can be wide and inclusive at this big track or it can be myopic to the point of madness. Focusing on individual car battles to the exclusion of the bigger picture can lose TV viewers any perspective of what is happening on-track very quickly. The TV cameras can make beautiful pictures of the long backstretch and the scenic run into Turn 1. The question is will the director use them?

ESPN has been harsh in trying to make this race into NASCAR's version of the Indy 500. For these drivers, it is all about making the Chase for the Championship. This is only one in a long string of races that can put them in position to accomplish that goal. Taking a risk at Indy can only result in an accident that will end the day, affect the Chase and rile the sponsor.

The pit reporters are going to be key if this race settles into long green flag runs. Updating strategy may be the only storyline in progress unless there is an incident. The season to this point has featured conservative racing and battles that involve track position being decided on pit road.

ESPN will highlight a super slo-mo handheld camera on pit road to try and get some fresh replay angles. The "bat-cam" returns on a wire above the pits and will be zooming along at 80mph as it follows cars down the frontstretch and out of pit road. Once again the in-car camera technology will feature two different camera angles from the same car on the screen.

Bestwick is great at directing traffic and keeping things in perspective, but he does not pick the images being shown to fans or integrate the commercials and features. The ESPN Non-Stop commercial format does not start until the Chase, so the telecast today will have full-screen commercials from start to finish.

This season there will once again be a SportsCenter scheduled right after the race to allow for an extended post-race show. This has been a positive step, but often the SportsCenter anchors chosen to fill this slot have a low regard for NASCAR and have been happy to let it show on the air.

The real story of this race may be the fans in the stands. Reporters going to the track this morning were amazed that there was little or no race traffic. The Nationwide Series race yesterday drew a very small crowd as did the Friday sportscar event. Keep an ear out for how TV deals with the attendance issue.

The weather is good, the field is full and there have been no tire issues. NASCAR clearly explained the restart issues in the AM driver's meeting, so the only thing left to do is race. We will take your TV comments here today as well as on our Twitter live stream using the #TDP1 hashtag.

Thanks again for taking the time to stop by, there will be a new post up for your "Race Wrap" comments after the Brickyard 400 today.