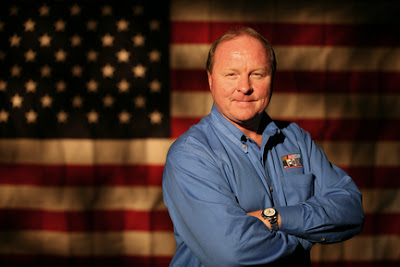 There might have been all-star drivers like Dale Junior and DJ on the track, but the real story of Monday's Pre-Season Thunder on SPEED was not out there turning left. He was seated up in the TV studio alongside host John Roberts. Much to the relief of many NASCAR fans, Larry Mac was back.

After a 2007 season that separated McReynolds from all the other NASCAR TV analysts in terms of information and dedication, he showed that 2008 will continue his dominance. Working on the Fox, TNT, and SPEED TV packages, Larry Mac seemed to be everywhere last season.

Few of us can forget his 2007 performance at Sonoma. Sick as a dog, perched on the TNT infield studio set next to the track and with his voice fading, McReynolds hung-in there as the voice-of-reason and guided viewers through the chaos of the race.

Monday at Daytona, it didn't take McReynolds thirty seconds to get back to his hyper-excited ways. He had all the info from testing right down to the fine details. This was a bit of a shift from Jeff Hammond, who tends to offer more of a commentary than McReynolds type of detailed explanations.

It is this combo of personalities that serves them well when they work with Steve Byrnes on TV assignments like Trackside, practice and qualifying shows. Alone at Daytona, they offer the same information in two very different styles of delivery.

McReynolds had Kevin Harvick as an in-studio guest, and did a great interview with this owner/driver. As fans know from last season, once testing is over the public access to the Sprint Cup drivers is limited. So far, it has been great to see these high-profile figures in an informal and relaxed setting. One thing is clear, they like to talk with McReynolds.

This week, Truck Series pit reporter Adam Alexander is covering the garage area. Monday, he tried to interview Tony Stewart right out-of-the-box. Things did not go well. Stewart was pleasant, but gave Alexander absolutely no information and looked like he would rather have a sharp stick-in-the-eye.

McReynolds did a great recap of the new COT issues at Daytona in terms even the casual fan could understand. This type of reporting is where he shines, especially when he can be in the garage with examples of what he is talking about. He certainly did set the stage for some interesting issues to appear later in testing.

This higher-profile TV presence for SPEED at Daytona has also served to promote the Rolex 24 and even the Barrett Jackson Auction. Even while serving those purposes, the network has not forced the kind of "promo intrusion" that we saw with TNT.

In wrapping the show, all three SPEED personalities were on the set and presented the kind of top-notch appearance and professionalism that this cable network has been working hard to achieve for years.

So far, the 2008 season on TV has to be very pleasing to the networks, the fans and most of all...NASCAR. There is a lot riding on the next four weeks, and if SPEED keeps up this type of performance, it may be the perfect "ramp-up" to Speedweeks.

The Daly Planet welcomes comments from readers. Simply click on the COMMENTS button below, and follow the easy instructions. There is nothing to join and we do not require your email address. We just want your opinion on Pre-Season Thunder on SPEED.
Posted by Daly Planet Editor at 6:22 PM 41 comments:

As ESPN Classic continues its series of Daytona 500 highlight shows, fans on this Monday were treated to "The Dean" of American motorsports, Ken Squier.

The 1979 race was shown in two hour edited form without the intrusive graphics of other ESPN Classic offerings. The network let this program stand alone to pay homage to the incredible content and the outstanding announcing that thrilled viewers decades ago.

Back then, Squier had to do some smooth talking to get CBS to carry the race live. "It was a tough sell," Squier said. "There was a general feeling that this was more of a novelty thing and that it wouldn't work on a national level."

Needless to say, it did. Squier wound-up announcing every Daytona 500 from that original 1979 race right up to 1997. He then passed the baton to Mike Joy, who follows closely in the Squier mold of continually updating the action and keeping the fans interested throughout the event.

Now in his seventies, Squire is a proud Vermont resident and still owns and operates the Thunder Road Speedway in Barre, VT. He has won many awards in his life, is a member of several Halls of Fame, and continues to have an impact on the national motorsports scene.

The 1979 race allowed viewers to watch the very different style of racing in those days, despite the high speeds. Everything seemed to be a bit more casual, from the safety workers to the track security. The one thing that was not casual was the racing.

Squier was a master at informing the viewers about an individual driver while simultaneously providing the call of the race. His frequent reference to hometowns, rookie status, and past racing experience layed the groundwork for the focus on the individual drivers in this personality-driven sport.

While the last lap of the race became a classic, it was Squier directing the cameras from the announce booth that put the focus first on Richard Petty and his crew, and then turned the attention to the continuing action between Cale Yarborough and the Allison brothers on the backstretch.

Once again in this program, viewers saw much wider camera shots than we see in today's NASCAR coverage. The old CBS style almost never showed just one car, and rarely put the focus of the telecast on the leader. Squier understood that every story needed to be updated, and used his pit reporters in just that way.

This series continues on ESPN Classic next Monday with the 1990 race which saw heartache for the late Dale Earnhardt Sr. and unexpected success for Derrike Cope. Once again the program will be in a two hour format for those of you recording this series.

In the middle of the off-season, with testing at Daytona in-progress and the anticipation of a new season building, it was quite fitting to hear the voice of Ken Squier at the speedway bringing home another flag-to-flag telecast.

The Daly Planet welcomes comments from readers. Simply click on the COMMENTS button below and follow the easy instructions. There is nothing to join and we do not want your email address. We just want your opinion on this ESPN Classic program.
Posted by Daly Planet Editor at 4:49 PM 28 comments:

DW Gets The Last Word 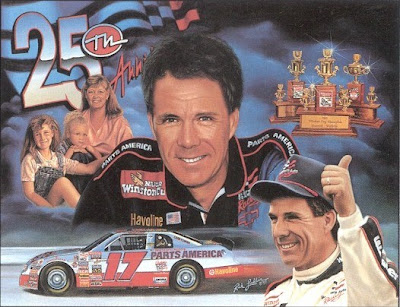 Here we go. DW got the last word on my column about pre-race and infield hosts for NASCAR races on TV. Click here and then read the "Oh, by the way" segment.

It is frustrating when someone completely misses the point of a column. But, I guess I should take some comfort in the fact that he read it. First, someone sabotaged the Fox Sports "boogity" poll and now suddenly I am attacking Chris Myers.