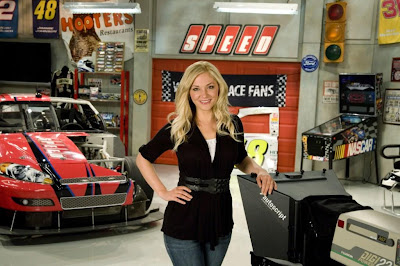 I hope everyone had a great holiday weekend. Here are some of the topics and news items that are of interest as the work week gets started.

Once SPEED expanded the Race Hub show to one hour, we discussed the topic of adding a dedicated reporter for this new series. Well, SPEED has done just that.

Danielle Trotta, pictured above, will be joining Race Hub to provide the field reporting. Trotta is a UNC Charlotte grad and has been working locally in Charlotte at WBTV. Click here for a peek at her station bio.

It's been a while since SPEED expanded the line-up and getting Trotta is a bonus. She has already visited the NASCAR facilities and shops in the area for her local station assignments. This is a piece of the puzzle that makes sense for the new expanded format.


This past Saturday, TNT had quite the online evening. Turner Sports is the parent company of TNT and also operates the NASCAR.com website. They created the RaceBuddy online application that is offered free for the TNT races. Saturday night for the Sprint Cup Series race, RaceBuddy also offered a 3D version for viewing. The response from fans was overwhelming.

Here is the official Saturday scoop from the folks at Turner:

As we have discussed many times, NASCAR is completely behind the times in terms of online streaming due to a variety of rights issues. The NASCAR on FOX portion of the season aired with no streaming or RaceBuddy. Now, it seems that the final seventeen Sprint Cup Series races on ESPN will also have no online applications of any kind.

Click here for a recent interview from reporter Michael Smith with ISC CEO Lesa France Kennedy. She made the point that NASCAR must change to address the younger fans who are simply not going to sit in front of a TV set for four hours.

"Technology is so important to them," said Kennedy. "Then, just the way they communicate, the Facebook, the tweeting. So how do you make your product appealing to them and also get the message out to them in the way they communicate? You just have to give people more options. NASCAR.com is a great example. You can still watch the race on TV, but the younger fan might want to go to NASCAR.com and see that different perspective. It's not shutting anyone out, it's just providing more avenues for people to enjoy the sport, and we've got to continue to look at that."

If this is really a priority for France and her brother, then getting more free and online content down the stretch should be on the front burner right now.

Click here for the TDP Facebook fan page. We have new fan pics up. Justin takes a tour or SPEED studios and TNT staff hard at work at the track.

Finally, the NASCAR Fan Council was back at it again this week. They asked a select group of fans about the TV broadcast and the length of the race. I hope that second part was in reference to the start time. The NFC also asked the following.

Compared to other races broadcast on TNT, how did you like the presentation of the Coke Zero 400 on TNT featuring the “Wide Open” format?

TNT aired the Coke Zero 400 at Daytona in their “3D” format on television and on NASCAR.COM through RaceBuddy.

Which of the following applies to you?

At lease we know NASCAR has an eye on the TV telecasts and the ancillary new media issues that are coming to the forefront this season.

ESPN's Nicole Briscoe hosts NASCAR Now Tuesday at 5PM ET on ESPN2. She returns at the same time on Wednesday, but there is no show Thursday due to coverage of the US Open's women's golf championship.

We welcome your comments on these topics. To add your opinion, just click on the comments button below. This is a family friendly website, please keep that in mind when posting. Thanks as always for taking the time to stop by The Daly Planet.
Posted by Daly Planet Editor at 7:00 AM 21 comments: