It's Thursday Night For Truck Racing 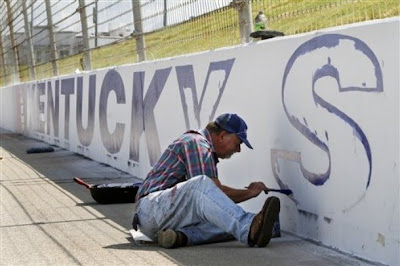 UPDATE: Sorry folks! Due to some scheduling issues I am unable to host a live truck series blog tonight. We will instead use this post for comments on Thursday's truck series coverage on SPEED. To add your opinion, click on the comments below. Comments may be moderated before posting. Thank you!

The season is grinding on and the field is pretty thin, yet the Camping World Truck Series somehow manages to put on a pretty good show. Nowhere in NASCAR is money tighter than the third-tier national touring series.

Camping World has been a good sponsor, but this week's entry list for Thursday night's race at Kentucky Speedway shows that a pretty good number of the starters may be exiting the facility long before the race is done.

There are 37 trucks on the entry list and it looks like about ten of them will be parking once the free fuel and the single set of tires is done. That's a shame, but it's a reflection of the times in which we live.

The mix of cross-over drivers just shooting for the win is lead by Kyle Busch and Elliott Sadler. Truck series points leader Johnny Sauter has rookie Cole Whitt chasing him down and only 20 points behind going into the race. Ron Hornaday, Austin Dillon and Matt Crafton round-out the top five in season points.

18 year-old rookie Johanna Long continues to persevere and Jennifer Jo Cobb makes a truck series appearance in a truck she is listed as owning. Parker Kligerman continues a good season for rookie owner Brad Keselowski as he sits in 8th place in the points.

SPEED has the gang back together again. Rick Allen has Micheal Waltrip and Phil Parsons in the booth for qualifying and race coverage. Hermie Sadler and Ray Dunlap will patrol pit road. SPEED's veteran production team should make good pictures under the lights for the race.

There are fifteen more races this season for the trucks including long trips to Las Vegas and Dallas. It should be interesting to see if some of the truck series regulars can give Busch and Sadler a run for their money on Thursday night.

On these triple-header weekends, it's always interesting to see what SPEED can do with an on-air crew of 6, no infield studio and far fewer cameras than ESPN and TNT will use on Friday and Saturday night.

Just like the scrappy truck teams, SPEED usually delivers a good show that keeps the focus on the racing and lets the cameras show the best battles on the track.