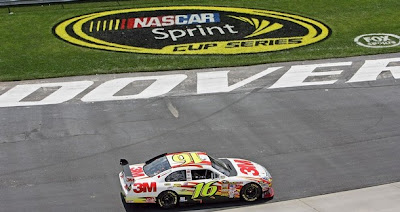 This week has certainly seen the tempers running a little higher and the smiles coming a little less quickly among some of The Chase contenders. Friday at Dover will present an opportunity to get to the front of the field for the start of Sunday's race.

The trek to qualifying will start with morning practice over on SPEED at 11AM ET. This is one of the programs SPEED added to the schedule only a few short months ago and the increased coverage is welcome. Especially with the COT, practice is often very interesting.

It will be Steve Byrnes, Jeff Hammond and Larry McReynolds handling the practice action from the broadcast booth with Wendy Venturini and Hermie Sadler reporting from the garage area.

ESPN2 is up next at 3PM with Sprint Cup qualifying. Dr. Jerry Punch, Dale Jarrett and Andy Petree will call the action. Down on pit road will be Mike Massaro, Jamie Little, Shannon Spake and Dave Burns.

Following this session, NASCAR Now will air from the ESPN studios in Connecticut. The show will update the happenings at the track and cover the rest of the NASCAR news. This show is scheduled for 4:30PM.

Over on SPEED, it will be John Roberts on-the-air with NASCAR Live at 5PM. Roberts will be joined by Randy Pemberton and probably Hermie Sadler as his reporters. Bob Dillner has this weekend off. This show serves to recap the activity in the garage, catch fans up on the stories of the day and also to promote the rest of the NASCAR TV schedule for the weekend.

Next on SPEED will be the Nationwide Series practice that was recorded slightly earlier in the day. Byrnes and company will return to call that action which should last for ninety minutes.

All of that leads to SPEED's traditional Friday end-of-day show, Trackside. Byrnes and "the fun bunch" of McReynolds, Hammond and Elliott Sadler will welcome Jimmie Johnson and Kurt Busch as guests this week. This is a free-wheeling talk show that covers many NASCAR topics and lets both guests stay on the stage for the entire program. The show begins at 7PM.

ESPN2's coverage of qualifying should be fun to watch because there are 12 teams that really want track position at the start of this race and are putting a big effort into getting just that. Dover is an unforgiving track where accidents are concerned and another mistake by several contenders could end any hope of a championship. Starting up front is going to be big.

This post will serve to host your comments about the NASCAR TV on Friday. Both of NASCAR's two remaining TV partners are going to be very active and the contrasts in style between ESPN and SPEED are often very distinctive.

To add your TV-related comment, just click on the COMMENTS button below and follow the easy instructions. The rules for posting are located on the right side of the main page. Thank you for taking the time to stop by The Daly Planet.
Posted by Daly Planet Editor at 6:00 PM 50 comments: