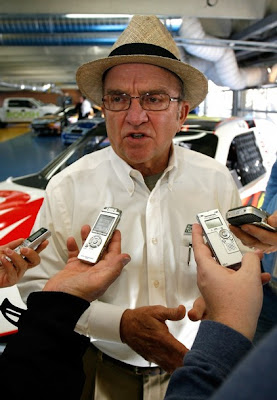 Right in the middle of the Charlotte Media Tour, an article appeared on the official NASCAR.com website written by a longtime friend of the sport, Joe Menzer.

Veteran owner Jack Roush took this opportunity to pass along his ideas on who exactly is to blame for the sport's recent slump. His conclusion? Television, of course.

Here are some excerpts from the Roush comments that we are going to discuss:

"We have not had the level of support from the TV studio box that the other sports have. I would hope that FOX and ESPN and everybody else (would) really think about what they are doing."

"The complaints have come from reporters and the media that has maybe a vested interest -- if you look at [announcers and former driving champions] Darrell Waltrip and Rusty Wallace and all the ex-drivers and ex-crew chiefs that are out there. It's not unreasonable to say they've got some ax to grind over something that frustrated them in their careers when they were on the firing line. We need to reel that back in; that needs to be something that's not carried out front to the fans and to the public."

Needless to say, ESPN spokesman George McNeilly was quick to respond. His point was that ESPN hired five former Cup champs who were credible on the racetrack and are now credible providing commentary and analysis away from it.

Over at Fox Sports, a spokesman provided the following statement to TDP:

"Our on-air team is as passionate about NASCAR as any driver, owner, crew chief or fan, and our analysts speak their mind based on the immense experience and success they enjoyed during their on-track careers."

"The broadcast booth is not a pulpit, neither is it a mouthpiece, and FOX Sports respects that. It is place from which to describe the action and provide thoughtful commentary, which all fans deserve. NASCAR fans know their sport and they’ll know if a broadcaster holds back, and once you cross that line, all your credibility is gone."

The frustration over a lackluster season began to be pointed at the media last year after a relatively harmless interview of three TV personalities took on a life of its own. Reporter Dustin Long, the President of the National Motorsports Press Association, spoke to Kyle Petty, Larry McReynolds and Jimmy Spencer.

The three TV commentators spoke rather passionately about what they would like to see changed and how the sport could get back on the right track. Unfortunately, that was not the way NASCAR saw it. Within days, McReynolds was calling Long a liar and saying he should not be trusted.

Petty shrugged his shoulders and kept a low profile. He was suddenly absent from Twitter for months. Wednesday, SPEED announced that Spencer had been relieved of his duties on both NASCAR RaceDay and the post-race TV show called Victory Lane. Those two shows were his TV career for years.

Freedom of speech is never going to be affected on the Internet, but television is a very different story. There are only three sets of analysts who call the entire Sprint Cup Series season. They are hired by the television networks who hold the rights to show the races, practices and qualifying.

Roush may be a little odd at times, but he is a smart man. Only weeks before the season begins, he uses Menzer and NASCAR.com to fire a shot across the bow of the three Sprint Cup Series TV networks. He even called out Darrell Waltrip and Rusty Wallace by name.

It should be interesting to see how Fox, ESPN and SPEED react as they all begin coverage of Speedweeks. A major Cup Series owner points directly at the TV coverage as causing harm to the sport and says publicly that commentators have a personal ax to grind because of their past.

Where do you fall on this issue after watching the series all last season? To add your opinion on this topic, just click on the comments button below. This is a family-friendly website, please keep that in mind when posting. Comments may be moderated for content prior to posting. Thanks for stopping by The Daly Planet.
Posted by Daly Planet Editor at 5:00 AM 41 comments: