Wednesday was just another slow mid-week news day in "NASCAR land." The stories of the weekend had faded away, and the fans and media were turning their attention to the Watkins Glen action beginning on Friday.

ESPN2's NASCAR Now took to the air with co-host Ryan Burr at the helm, as he is so often for the middle of the week programs. Right off the bat, Burr grabbed the viewers attention be showing the odd couple of Robby Gordon and Marcos Ambrose sitting side-by-side on-camera.

Burr let Gordon talk fans through his "arrangement" to provide a ride for Ambrose in the NEXTEL Cup race at Watkins Glen. Ambrose is the star of the Busch Series, and Gordon's "dumping" of him at Montreal was a public relations nightmare. Especially, with the popular Aussie driver on the verge of his first NASCAR win. Burr pinned-down Gordon by asking him if he would spin Ambrose on the final lap at The Glen to get the win. His political answer and nervous grin was priceless.

Brad Daugherty on-camera was finally making the type of strong statements that ESPN hired him to make. Calling Robby Gordon "the most talented driver in the garage" and saying that "we will see a future championship out of Kyle Busch." He then transitioned to Kurt Busch and pointed to the "coil bound" situation as the reason for his early struggles. His final comment was that Kurt may well win it all this season. If Daugherty has finally awakened from his "TV slumber," this was a good start.

Next, Burr went directly to his grinning "Insider" news reporters who obviously enjoy working with him. Angelique Chengelis and Terry Blount worked the David Stremme, Michael Waltrip, and Toyota stories with detail and clarity. This is the type of "news block" that this show needs, and the lack of scripted questions and genuine knowledge by the host makes a big difference.

Crew chief Pat Tryson joined the show by phone, and Burr asked all the right questions about team chemistry, Tryson's long journey this season, and the fact that the team seems to be turning around. Tryson's low-key delivery and Burr's great questions really allowed a lot of information to be relayed to viewers, as well as painting Tryson as a well-spoken racing industry professional.

The production team chose to close the show with a "roll-out" highlighting the video and audio images of both the Busch and Cup events of the weekend. Finally, ESPN used a "music video" montage in a way that did not interfere with content, and actually served a nice purpose.

As The Daly Planet has said since the first episode of this program in February, NASCAR Now has the potential to be more powerful a daily show than Baseball Tonight or SportsCenter. The simple reason is that there is absolutely no competition. No national or regional TV networks carry a daily NASCAR show, ESPN2 is the only game in town.

How ESPN decides to "shape" this program as "The Chase" approaches will be interesting. In a strictly "news and information mode" like Wednesday with Ryan Burr, NASCAR Now has the feel of RPM2Night. It is fast-paced, informative, and packs a full thirty minutes of hardcore information and interviews in the show.

In its "hype and hysteria" mode, the show resembles a sports-talk radio broadcast where opinion and innuendo rule the day. The lure for the fans is "what will they say" about a certain topic. It shifts the focus from the "real" to the "emotional" side of every issue, which keeps radio listeners tuning-in. On TV, its a tough sell to watch the "talking heads" for thirty minutes and get little hard news.

For six months, ESPN has been tinkering with this daily show and continues to make changes for the better. With the network "giving up" practice and qualifying for both the NEXTEL Cup and Busch Series beginning in two weeks at Michigan, maybe we will see another change at NASCAR Now.

Allen Bestwick will once again be available to come to Bristol, CT and remind everyone how a true TV motorsports professional conducts himself. The last time he was in Bristol it turned the TV team on its ear, and resulted in several high-quality shows that had the whole place buzzing.

As long as ESPN is going to list Bestwick as a co-host on their media releases and website, perhaps it would occasionally be a good idea to have him...on the air.

The Daly Planet welcomes comments from readers. Simply click on the COMMENTS button, or email editor@thedalyplanet if you wish not to be published. Thanks again for taking the time to stop-by, and leave your opinion.
Posted by Daly Planet Editor at 7:47 PM 14 comments: 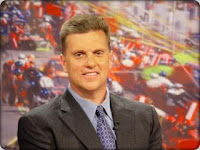 ESPN's coverage of practice and qualifying for their NASCAR properties has been a bit tough. The network decided to eliminate coverage of the first NEXTEL Cup practice. Then, they decided to run commercials over live Cup qualifying, rather than show every run.

Also after Watkins Glen, the live TV coverage of practice and qualifying for both the NEXTEL Cup and Busch Series heads back to SPEED.

Over the last several years, the network has been able to hone its skills with these types of tricky telecasts. SPEED made a habit of showing every car during qualifying, and also created a tremendous graphics package that clearly showed items like the "go or go home" cars. It was easy to read a lot of information with qualifying in progress.

During both practice and "happy hour," the network would put a ton of great information about what was going-on in front of the viewer. Since they did not have to worry about covering "the leader," it was a great opportunity to talk about the real stories of the day, and the weekend.

SPEED's return to these "support" activities will be led by Steve Byrnes, who is clearly coming into his own as a major play-by-play talent and host. The Daly Planet has done several columns this season on Byrnes "other job" as the host of both Trackside and NASCAR Live.

NASCAR TV viewers can slowly page through their personal list of on-camera announcers and separate them into "all about me" and "let's have some fun" groups. The good thing about these three is they are always about having fun, and they have consistently shown it in their NASCAR on SPEED efforts for several years now.

Backing this team up in the garage area will be veterans Bob Dillner and Wendy Venturini. This is a good duo because they are so different. Wendy is a college educated television professional with a family background in ARCA and NASCAR racing. Bob is the son of a "grass-roots" New England racer and he began writing for various speed-related publications at the age of fifteen. He came "up through the ranks" and is still very well connected to the short-track world.

While the role of Randy Pemberton has not yet been released by SPEED, it is clear that he is another key asset in their line-up. Now returning full-time to the national TV media scene, veteran fans remember Randy from his early days on Inside Winston Cup Racing with Ned Jarrett and his long family history in the sport. It also does not hurt to have someone on staff whose brother is the VP of Competition for the sport.

Surrounding the live practice and qualifying, the network will also continue their Go or Go Home show centered around the cars outside of the top thirty-five who must make the race on speed alone. Also, SPEED will be returning The Chase is On for a third season. This show is about the final ten races and will be hosted by Steve Byrnes with his "driver partner" to be announced over the next several weeks.

The Daly Planet was started to detail the situations that would be taking place in 2007 as a the multi-billion dollar sport of NASCAR racing changed its TV package. Taking a step back, it has been a TV season so far of incredible stories of both success and failure.

From the surprising debut of Lindsay Czarniak to the quiet demise of Doug Banks, one of the most interesting aspects of the year has been the on-camera announcers. In both studio and on-site, we have seen a whirlwind of faces that have included a basketball player, lawyer, football announcer, and even "a Turner baseball guy."

As SPEED walks back into NASCAR on-track activity, the pressure on them to deliver is going to be intense. The reason why? Four little letters that strike fear in the hearts of every sports producer in America...ESPN.

Beginning at Michigan, SPEED's coverage will now be compared to ESPN's practice and qualifying coverage of their first three races. In "TV land," there is no greater pressure than that. Once hiding up on the cable dial in the "digital sports tier," SPEED is now out front-and-center as the network "taking over for ESPN." This may be the reason they invented Tums.

The Daly Planet will pass along additional details of this package, and before the emails start flooding in, please understand that ESPN does not "share" their announcers like the other NASCAR partners have done with SPEED over the years.

Once again, Andy Petree, Allen Bestwick, and Mike Massaro are among the "odd men out" as we will only see them for the pre-race show and the race itself. While their input will be missed, that is the nature of the beast with ESPN in the mix. It should be interesting to see how this dynamic unfolds over the next several weeks.

The Daly Planet welcomes comments from readers. Simply click on the COMMENTS button below, or email editor@thedalyplanet.tv if you wish not to be published. Thanks again for taking the time to stop-by and leave your opinion.
Posted by Daly Planet Editor at 10:54 AM 25 comments: