ESPN Has One Eye On July 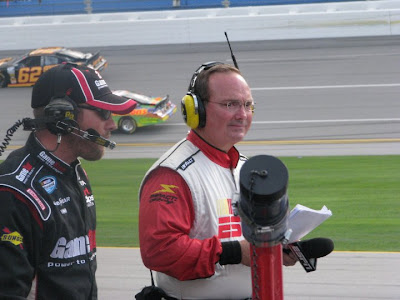 It will be July 25 when ESPN takes a fourth swing at televising the final seventeen Sprint Cup Series races. To say the previous three seasons have been an adventure would be an understatement.

Contained in this package is the ultimate prize for the NASCAR TV networks. That would be the Chase for the Championship. The NASCAR playoffs consist of the final ten races of the season with only a select field eligible to win the Sprint Cup.

It's not uncommon to see top NASCAR teams struggle. Sometimes, it's for an entire season. Often the issue is not the engines or the cars or the race strategy. It's not the guys in the shop, on the pit crew or even the sponsors. Sometimes, it's all about chemistry.

Over the years, we have seen a single change of a driver or crew chief serve as a rallying point for an entire organization. Just one change and suddenly the skies brighten and the momentum shifts. As it often turns out, the potential was there all along. It just needed a jump start to emerge.

After three seasons, ESPN was down on its luck. In late 2009, the huge media company had just struggled through the roughest stretch of Sprint Cup Series telecasts in recent memory. As we say in TV land, there was no joy in Mudville.

ESPN had given Dr. Jerry Punch an opportunity to grow into a major role on TV that anyone would cherish. Punch had jumped at the chance to call the play-by-play for the new NASCAR TV package that started back in 2007. Then, all hell broke loose.

Instead of simply calling the races, Punch found himself dealing with Brent Musburger and his magic podium as the "host" of the telecasts. After several disasters in the infield, Suzy Kolber was inserted as Punch's partner for the pre-race and updates. ESPN's Bristol, CT-based management had decided to use "in-house" talent whenever possible. It was a total disaster.

Once the action got underway, Punch turned to his right. There was Rusty Wallace. You have to wonder if Punch struggled for composure as Rusty used the Draft Tracker and its colored air flow gizmos to try and tell fans about the aero push at Richmond. After one season, Wallace was headed to the infield.

Despite the chaos surrounding him, Punch had chance after chance to carve out his niche in the NASCAR TV booth. It never happened. Last year, ESPN actually telecast several Nationwide Series races without a play-by-play announcer. "Backseat Drivers" the network called it. In reality, it was the handwriting on the wall.

Click here to review the story we reported back in December. ESPN had decided to bring TV veteran Marty Reid in to call the Nationwide and Sprint Cup Series races for 2010. After three seasons, Punch was out.

In what may go down as one of the best decisions in ESPN's NASCAR history, cooler heads prevailed where Punch was concerned. He was not given his walking papers. As Reid came into the TV booth, Punch simply headed back to pit road. Click here to review what happened when ESPN opened the season in Daytona. It was like Punch was home again.

Just like a team finally winning a race after a tough year, the entire ESPN on-air vibe has changed. Reid turned out to be just what Dale Jarrett and Andy Petree needed in the booth. A veteran play-by-play guy who can turn up the excitement, direct the traffic and let the analysts shine.

Suddenly, the pit road reporters had to step-up their game when Punch was dumped into their laps. Antagonizing questions and hyped agendas had led to bad feelings in the garage where ESPN was concerned. Punch's presence this season has gone a long way toward changing that. His recent rain delay interview with Dale Earnhardt Jr. was a case in point.

Into this mix gets tossed solid TV professionals like Allen Bestwick and Dave Burns. Gizmos like Draft Tracker are long gone. Gimmicks like music videos and celebrity interviews have been retired. In the blink of an eye, ESPN is a contender. Viewers can feel it, hear it and see it. The ESPN of old has returned.

Sure, Tim Brewer will still be pointing at fuel cells as if we all just landed from Mars. Brad Daugherty will still be sitting in the infield stating the obvious and getting "fired up." If that is the worst part of the ESPN stretch drive this season, I'll take it.

With the way the NASCAR on ESPN gang has performed this year, we may be getting ready for the type of dynamic and exciting TV coverage that The Chase has deserved. One little change has led to very big things. Credit goes to the ESPN executives for having the courage to start the ball rolling in the right direction.

Marty Reid returns with Bestwick anchoring the infield and Punch reporting from pit road on Friday night at 7PM ET as the Nationwide Series races in Darlington, SC.

We welcome your comments on this topic. To add your opinion, just click on the comments button below. This is a family-friendly website, please keep that in mind when posting. Thanks for stopping by The Daly Planet.
Posted by Daly Planet Editor at 2:00 PM 25 comments: