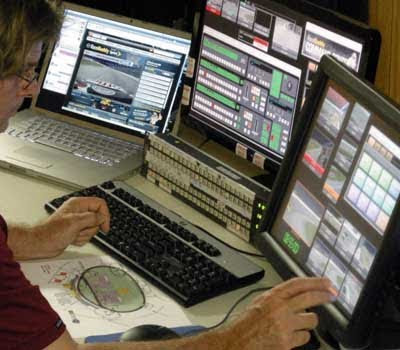 It certainly sounded pretty good in the news release. Turner Sports and ESPN had made a deal. RaceBuddy was coming to the Chase. That is the Broadcast Slate 3000 pictured above that takes selected video feeds from the TV truck at the track and routes them to the video sources on the RaceBuddy page.

"Enhancing the viewing experience and improving the sport's digital and social presence for our millions of fans at the track, at home and everywhere in between is a goal we never lose sight of," said NASCAR's vice president of digital media Marc Jenkins.

"Turner Sports is delighted to partner with NASCAR and ESPN to expand the award-winning RaceBuddy on NASCAR.COM to the Chase for the NASCAR Sprint Cup," said senior vice president of Turner Sports Matthew Hong.

"Feedback from fans has been that they wish RaceBuddy were available for additional races outside the TNT portion of the season," Hong said. "We're proud to be able to bring them ChaseBuddy and extend the interactive experience of RaceBuddy to nine playoff races."

Hidden in the news releases from the various parties was this little nugget. "RaceBuddy will feature two mosaics with a mix of eight in-car and stationary cameras positioned around the track," said the Turner statement.

A key concern of ESPN when the network returned to the sport in 2007 was that an online product like RaceBuddy would take viewers away from the actual TV coverage. Racebuddy was created to simply be an addition to the telecasts, although it did have one camera dedicated to showing racing at all times. Now, that has changed.

While the in-car cameras and the "speed shot" from the stationary cameras were popular, it was the "battle cam" that gave RaceBuddy its heart and soul. That camera has now been completely eliminated from the Chase for the Championship version.

"Battle cam" was one of the "high cameras" positioned on the grandstand tower at the racetracks. It could see all the way around the track, but more importantly it was used to show something that current television coverage has long since cast aside. It constantly showed the best racing on the track regardless of position.

Follow the leader is the mantra of the current Sprint Cup Series TV partners. During the FOX portion of the season, the complaints pour in that the TV mix is simply the leader of the race and Junior. There is no RaceBuddy for these events. NASCAR on FOX absolutely wants nothing to do with online video.

When TNT rolls around, RaceBuddy eases the pain of viewers who again watch the leaders go around and around on TV. RaceBuddy allows users to watch the best racing on the track from the green to the checkered flag on the "battle cam." That will never be something shown on TV for more than a minute or two.

When RaceBuddy popped online last week for the first Chase race it offered fans multiple in-car cameras chosen by the Turner Sports folks. The two other slots were filled with cameras assigned to one specific view. ESPN had effectively shut the door to being able to use RaceBuddy to actually see cars racing around the track.

Fans who only had computer access of the rain-delayed Monday race either rode in-car with their favorite driver or watched the field drive through the other two camera views. While fans who attended the event told us there were some good battles in the middle of the pack, that was again eliminated in the ESPN production formula of tight camera shots of one or two cars.

It's not known who blinked, but RaceBuddy was effectively neutered in this deal. If your driver is selected for a featured in-car camera, then perhaps the value of this online application remains high. But without the "battle cam," it's just a watered-down version of the original concept.

For those asking, RaceBuddy will also not be providing an audio track of either the ESPN telecast or the radio coverage of the Chase races. Sound from team scanners can be heard when an individual camera is selected and the natural sound of the racing is heard on the other camera choices.

Sprint is paying the bill, so changing between mosaic views or individual cameras will get you a Sprint commercial playing on the screen. Perhaps, the 15 second versions will be inserted for the New Hampshire race instead of the longer 30 second versions that proved to be tough for race fans after several hours of use.

While RaceBuddy has finally cracked the online ice where ESPN is concerned, this Chasebuddy version packs a lot less punch by eliminating the most popular feature. Perhaps, this compromise deal meant that all parties had to give up something. It's pretty clear that "battle cam" is what Turner sacrificed.