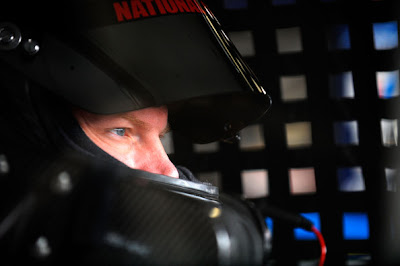 Rarely has a Sprint Cup Series race had the national media spotlight like the race today in Talladega. On the heels of IndyCar driver Dan Wheldon's death, motorsports has come once again under the glare of the mainstream media's spotlight.

Publications like the Wall Street Journal and the New York Times barely even acknowledge racing, but are quick to jump on the bandwagon of blame when a serious incident takes place. Online sites like the Huffington Post suddenly "discover" racing when they can lead with a powerful headline referencing death.

Add to this the fact that SPEED has been replaying the death of Marco Simoncelli in the Malaysian MotoGP race today. Adam Alexander has replayed the accident in NASCAR programming all morning long. Even SPEED straddles the line.

Nicole Briscoe gets the assignment of opening the NASCAR Countdown pre-race show. Her husband is IndyCar driver Ryan Briscoe, who was uninjured in the accident that took Wheldon's like. Both families are longtime friends.

Brad Daugherty has just announced a new crew chief for 2012 and the return of Bobby Labonte as the driver for JTG/Daugherty Racing. Daugherty joins Rusty Wallace on the pre-race show with Briscoe. Wallace continues to struggle for sponsors for next season in the Nationwide Series and has recently denied reports his team might suspend operation. Needless to say, it should be interesting to see what topics are discussed on this pre-race show.

The Chase continues under this new points system, but the type of dynamic stories of the past have yet to emerge. Three drivers are still realistically in the game, but the type of tag-team racing that Talladega now demands will no affect the ability of some teams to contend.

Allen Bestwick will have to try and describe the tag-team action and somehow frame it in a Chase context. That is simply not going to be easy to do. Rumor is that teams have designated pushers and that the Chase drivers in contention will always be pushed to the front by any and all teammates as the ultimate goal.

Dale Jarrett had his appendix out this week, but rallied to get to Talladega. He has strong opinions on safety and it should be interesting to hear what he has to say. Andy Petree partners with Jarrett and Bestwick upstairs. Petree continues to be the foundation of this coverage as the only original member of the NASCAR on ESPN team in the TV booth.

Dr. Jerry Punch, Jamie Little, Vince Welch and Dave Burns are the pit road reporters. Little and Welch were involved in the IndyCar coverage from Las Vegas. Little was sent from the track, still in her firesuit, to the hospital in Vegas for updates on Wheldon's condition. There is little doubt that emotions are still raw.

ESPN's coverage is deeply affected by the tag-team racing. The cameras are now forced to frame four, six or even more cars at a time to keep the action in a single frame. It is impossible to isolate on one car, as there are only "combo's" on the track under green.

SPEED produced the truck series race on Saturday and framed the coverage very wide, integrating aerial shots on a regular basis. Effectively mixing the high and low camera angles relays the incredible speed of the track. Lazy directing results in long periods of high angle coverage, which loses the feel of the speed and results in a feeling that the race is actually "boring." No such thing at Dega.

Let's hope the racing is as safe as possible today and NASCAR walks away with the storylines in the media relating to the racing. As usual, eyes are also on Dale Earnhardt Jr. at this track. There is little doubt TV will forget that element.

This post will serve to host your comments on the ESPN coverage of the Sprint Cup Series from Talladega. To add your TV-related opinion, just click on the comments button below. Thanks for stopping by.