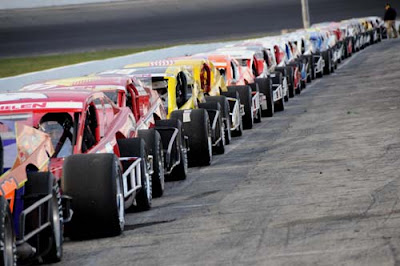 This is the third season of the daily NASCAR Now program on ESPN2. The series has grown by leaps and bounds from its early painful days of clueless announcers and a rookie production staff into a solid news and information show.

Unfortunately, the production team's learning curve continued this week with some of the content choices on the Tuesday and Wednesday shows. These two days, especially Wednesday, have long been suggested by TDP for regional updates and highlights.

Perhaps, some racing fans may remember "Open Wheel Wednesday" where ESPN's RPM2Night show used this mid-week day to show regional racing highlights. Well, this would have been the week to start for 2009.

When Rick Hendrick celebrated his 25th anniversary in NASCAR this past weekend, it dominated the media up to, during and after the Sunday Sprint Cup Series race. Hendrick certainly deserved the attention, but so does another family of racers.

Thompson International Speedway, just a short and scenic drive down the road from ESPN, will be hosting the opening of the 25th season of the NASCAR Modifieds. Sponsored by Whelen, the Mods open with the traditional "Icebreaker" on Sunday afternoon in the Connecticut countryside.

Names like Jimmy Blewett, Teddy Christopher and Eddie Flemke Jr. might not be known nationwide, but these racers have a big following on the East Coast. Ask around about Reggie Ruggiero, Jamie Tomaino and Mike Stefanik from Maine to Florida. Stefanik alone is a seven-time season champ of the Whelen Mods.

Tuesday, NASCAR Now took an entire segment to interview Dario Franchitti, primarily because the IRL opener is this weekend in Florida. ESPN will not telecast the race, the Versus network has its own IRL show and Franchitti does not even race in NASCAR.

Wednesday, it was Brian Vickers in the ESPN2 studio talking in circles about his season and then wasting time with a foolish interview of reporter Marty Smith. Even host Nicole Manske seemed annoyed. "Where is this going?" she asked.

This time could have and should have been spent talking about any of the three NASCAR regional series in action this weekend. The Southern Mods are at historic South Boston Speedway and the Camping World West racers are at All American Speedway for Saturday night shows.

Ironically, NASCAR Now has awkwardly stabbed at the regional series in the past, including having several of the Modified drivers in the ESPN2 studios. Despite the fact that video clips and highlights are easy to get, NASCAR Now continues to be hypnotized by the Sprint Cup Series.

Meanwhile, 25 years after Ritchie Evans roared home with the first Modified win at Thompson, a field of 36 cars sponsored by local companies like Triple G Scaffold Services, Buoy One Seafood and Reen Othodontics will begin another storied NASCAR tradition right in ESPN's backyard.

Maybe, someone at NASCAR Now will open the door and discover the racing reality that many fans have known about for a very long time. 25 years, in fact.

Thank you for taking the time to read The Daly Planet.
Posted by Daly Planet Editor at 9:30 PM 17 comments: