Wednesday afternoons on ESPN2 have become an exercise in technology for true NASCAR fans. The DVR's and the TiVo's are humming at 5:30 Eastern Time for a below-the-radar TV series called Chasing Glory.

This week, perhaps the best show of the season was on-tap with an in-depth professionally done profile of Tony Stewart. Produced by NASCAR Images, this show features their signature deep-voiced announcer and lots of great footage from the NASCAR Images Library that has not been seen by most fans.

This included a rare look at a Roush Racing meeting featuring Mark Martin and Jack Roush talking openly about the superior car that Stewart's team often brought to the track. Pat Tryson and others were just scratching their heads about what and how the Home Depot team had done to get themselves in this position.

Since the transition to this new TV contract, the one thing sorely missing from the scene has been more in-depth and behind-the-scenes programming. NASCAR Images provides Survival of the Fastest to SPEED, and Chasing Glory to ESPN, but that is a dot on the landscape. Neither the Busch or Truck Series have any on-going program series that focus on the hard work of those teams and drivers.

This episode of Chasing Glory had a clear vision of how it should present the complicated Stewart, and it did a tremendous job. From chasing the early fiery days of Stewart's growth in the sport, to talking about his re-location to Indiana and his new found maturity, NASCAR Images put on a great show.

AP reporter Jenna Fryer provided the background information and the media perspective about Stewart. Her information helped to fill-in the holes in the story that could not be done with comments from Greg Zipadelli or Stewart himself. She has proven to be an interesting personality in her own right, with a cynical and yet supportive eye on the sport.

There may have not been a finer thirty minute "glossy" NASCAR TV program series on the air this season, with only ESPN's limited Ultimate NASCAR series comparing in overall quality to Chasing Glory. That is why the same question is being asked by NASCAR fans nationwide.

What the heck is this wonderful NASCAR series doing on the air at 5:30PM on a Wednesday? That is 2:30PM on the West Coast. What part of this timeslot says NASCAR NEXTEL Cup Chase for the Championship? ESPN is the exclusive provider of The Chase races. Can't they spare thirty minutes of primetime once a week for NASCAR?

Hopefully, the wonderful quality of this series as a whole will encourage ESPN to re-air the series on ESPN Classic during the off-season. Maybe, during the post-season meeting between ESPN and NASCAR Images, Chasing Glory might get a promotion to a regular night of the week in primetime so fans who do not have recording technology in their homes can also see this very nice series.

The Daly Planet welcomes comments from readers. Simply click on the COMMENTS section below, or email editor@thedalyplanet.tv if you wish not to be published. Thanks again for taking the time to stop-by and leave your opinion.
Posted by Daly Planet Editor at 5:27 PM 36 comments:

"Mike And Mike In The Morning" Heading For NASCAR 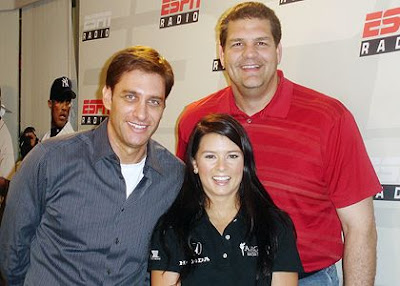 Flying a bit below The Daly Planet radar, we would like to thank the alert reader who informed us that ESPN's dynamic radio duo of Mike Greenberg and Mike Golic will be heading for the Texas Motor Speedway in a couple of days.

On Friday, November 2nd, the Mike and Mike in the Morning Show that began on ESPN Radio and has now migrated over to ESPN2 and a High Definition TV studio will originate on-location at TMS.

The program will air from 5AM to 9AM Local Texas Time, and will originate from the Speedway's Cafeteria in the infield. That seems to be a strange location, but I am sure it is due to weather and logistical issues.

The good news is that fans with an Infield Parking Pass can attend the live show for free. Once again, all infield campers are invited to show-up and have some fun with Mike and Mike live on both ESPN Radio and ESPN2. That should be interesting.

If a Daly Planet reader has the chance to attend, we certainly would like to hear about it and perhaps get some pictures for our site. These guys are very influential, and to have them on-hand will hopefully raise the profile of NASCAR to a new group of fans.

TMS has Eddie Gossage, who is a good promoter, as the head of the Speedway. Gossage cut his teeth with Humpy Wheeler in Charlotte, and hopefully he has made arrangements for some key drivers to stop-by and say an early morning hello.

With the right guests, and the friendly dynamic of the fans being there live, this could be a really good shot in the arm for ESPN just when they needed it.

Please feel free to add your comments below, just click on the COMMENTS button.
Posted by Daly Planet Editor at 1:32 PM 25 comments: