Lack Of TV Follow-Up On Incident Starts To Glare 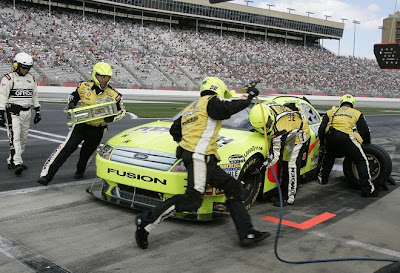 Like Apollo 13 on the far side of the moon, NASCAR TV is in a black-out this Friday, Saturday and most of Sunday.

NASCAR Now is on hiatus for college championship week on ESPN2 until Monday and stick-and-ball sports are dominating ESPNEWS. Because of the off-week, shows like NASCAR Live, Trackside and RaceDay are also gone from SPEED.

This TV gap comes at an interesting time for both of these networks for very different reasons. As we mentioned in (click here) this post, ESPN pit road analyst DJ Copp was clear in his Monday NASCAR Now comments that the Paul Menard Yates Racing team was the root of the problem that caused an errant tire to roll across pit road Sunday in Atlanta. That is one of the Menard team's pit stops from Atlanta above courtesy of Getty Images.

Copp is one of the two tire-changers on the Ambrose team involved in the incident and should certainly have first-hand knowledge. One conversation with his teammates after the botched pit stop should have told the tale immediately.

As several TDP readers who posted comments noted, NASCAR Now did not offer any response from Larry Carter, the Menard crew chief about the incident. Fans continue to pepper Internet sites like this one with the same question. If one of the Menard crew rolled the tire out into pit road on purpose, shouldn't he receive the same suspension as Ambrose crewman Jimmy Watts?

NASCAR has been mum on the topic since the original penalties were handed down. No additional video has yet surfaced to either uphold Copp's version of the events or confirm NASCAR's conclusion that this was an Ambrose team issue alone.

Perhaps, lost in the shuffle is the fact that on Sunday there were all kinds of TV folks at the track. Fox telecast the actual race, with a pit reporter assigned to the Ambrose team. ESPN had reporters on the ground for NASCAR Now and SPEED saturated the area with production folks reporting stories for the Sunday and Monday TV shows.

So, what happened to the follow-up on what some are calling the critical incident of the race? Fans may remember some brief comments from #47 crew chief Frank Kerr and even a smiling Marcos Ambrose after the race, but apparently that was not the whole story.

The Sunday night TV shows came and went without mentioning the issue of a Menard crew member being in the mix. True or not, the conviction with which Copp reported this to the Monday late night NASCAR Now viewers certainly seemed sincere. Copp has a long track record with the show of being accurate with his comments.

As other readers have pointed out, Copp is an ESPN employee on an ESPN program. He is making an allegation not previously reported on national TV about an incident in which only his team was ultimately penalized. Perhaps, taking the time to get a statement from the Yates Racing team would have been in the best interest of fairness to all parties.

ESPN's Marty Smith may actually have updated this issue Thursday morning on the late night edition of NASCAR Now. Unfortunately, like many fans I was forced to put the show on the DVR and then discovered that college sports had run long yet again. Smith's report was lost in space.

If Smith did update this information, perhaps some readers could take a moment and let us know the content of his report. The video of Smith's segment was unfortunately not made available on the ESPN website, despite the obvious fact that this late night program ran well past the scheduled off-time.

It will be The SPEED Report on Sunday at 7PM that gets the next whack at this topic. Unfortunately, the SPEEDtv.com website is not updated with the host information for the show. Dave Despain will follow next at 9PM with Wind Tunnel and his guest is Steve Letarte, the embattled Jeff Gordon crew chief. It should be interesting to see if Dave responds to a viewer question or asks Letarte about this topic.

Finally, Nicole Manske will get into the act on Monday at 5PM on ESPN2 when she fills-in once again for Allen Bestwick on the roundtable version of NASCAR Now. Manske has three NASCAR media folks as guests, including ESPN's own Angelique Chengelis who does not mince words when reporting the NASCAR news.

All of this should make for a couple of interesting off-days to continue a little friendly debate and explore why this topic has not crossed-over from the TV to the Internet side of the NASCAR media. Perhaps, without the video proof, the topic will eventually just fade away.

As always, we welcome your comments. Just click on the comments button below and follow the easy instructions. This is a family-friendly website, please keep that in mind when offering your comments please.

Thanks again for taking the time to read The Daly Planet.
Posted by Daly Planet Editor at 8:00 AM 51 comments: