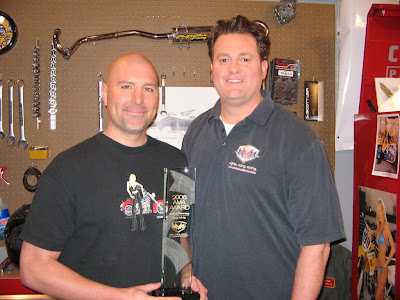 Somewhere, Greg White must be scratching his head. The former host of the popular 2 Wheel Tuesdays on SPEED saw his multi-hour primetime program cancelled without warning or explanation back in 2006.

White's show certainly had its flaws, but he presented to motorcycle enthusiasts a block of TV programming that delivered news, interviews and events. The network even created an addition to the old SPEED studios in South Charlotte to accommodate this program series. There really was a Greg's garage. That is White on the left, getting the 2006 Media and Reporting Award from AMA VP Ed Moreland for 2 Wheel Tuesday.

Now, SPEED has joined forces with the new power in American motorcycle racing to create another primetime block of programming. The Daytona Motorsports Group (DMG) is now in charge of motorcycle road racing in the US and things are about to change. They are the new face of the racing side of the venerable American Motorcyclist Association, the AMA.

This featured presentation will be one to three three hours in length and will showcase recorded and edited AMA races from one or two weeks prior. Click here to read the official press release and then see just how that idea was greeted by some enthusiasts in the comments section.

There is a popular saying that sooner or later "everything old is new again." While that may apply to SPEED partnering with the AMA, behind the scenes there is a very big NASCAR connection.

DMG's driving force and partner in the company is none other than Jim France. Some hardcore motorcycle racers are calling the new organization nAMAscar.

DMG is the very same company that runs Grand-Am Racing and brought the NASCAR approach of one chassis and restrictive rules to sports car racing. France used the Rolex 24 at Daytona for the Grand-Am Series in much the same way that Tony George used the Indy 500 for the IRL. Controlling the marquee event in the series was really all the leverage each needed to force change. This weekend, another famous race will join that list.

Not surprisingly, SPEED is televising all the Grand-Am races this season. Many of them, like the Rolex 24, will be carried live. This week, the network will kick-off the AMA Road Racing series with the classic Daytona 200. This time, just like the stock cars in July, the race will be under the lights in primetime from DIS at 8:30PM ET. Ironically, the race will feature Greg White reporting from pit road.

Click here for an overview of the motorcycle content from SPEED in Daytona. The live race will serve to promote the Saturday night TV series starting later in March.

Here at TDP, we have been asking for more NASCAR TV programming created away from the track and not involving the SPEED Stage. The only answer to that is the upcoming NASCAR Wives show on TLC. No, we still do not have an air date for the first episode.

Meanwhile, DMG has maneuvered the entire Grand-Am and AMA Road Racing series onto SPEED with the latest addition being up to 78 hours of primetime tape-delayed motorcycle road racing. What money changed hands and why SPEED stepped away from the "reality lifestyle" programming genre on this big TV night will never be disclosed.

The one thing we do know is that right down the road from SPEED, the NASCAR Media Group sits on their hands with tons of great footage and production resources just waiting for the phone to ring. Not even the six episodes of NASCAR Confidential were renewed by SPEED for 2009.

Additional video clips on NASCAR.com do not take the place of weekly TV series in support of the Sprint Cup, Nationwide and Camping World Truck Series. Now, more than ever before, SPEED and the NASCAR Media Group need to get some additional weekday TV programming on the air.

It will not be much longer before the afterglow of the Daytona races and the cash that came along with them fade into the economic reality that most of us are seeing every day. NASCAR teams in all three series need additional exposure on TV to attract sponsorship and keep the sponsors that stayed in the sport.

Now that the sports car and motorcycle TV business is all done, perhaps the France family could allocate some financial resources to produce a couple of NASCAR TV series. That is, while there are still three viable national series to promote.

TDP welcomes comments from readers. Just click on the comments button below. This website is family-friendly, please keep that in mind when you add your opinion.

Thanks again and happy posting.
Posted by Daly Planet Editor at 4:00 AM 9 comments: