"Johnny TV" Takes A Preseason Swing At "The Daly Planet" 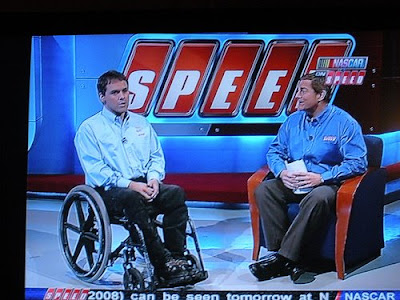 It seems tempers are getting a little tight after only the second week of NASCAR TV coverage on SPEED. The disaster that has been the two weeks of Preseason Thunder and the single week of Trackside seems to have gotten the host of one of those series a bit upset.

The lack of any hard news TV reporting by SPEED on NASCAR issues during this critical time has been beyond puzzling. While Randy Pemberton and Jeff Hammond have tried briefly to address some real issues, most of the TV time has been spent on the normal preseason "fluff" as if nothing was going on behind the scenes.

The only exception to this was a miscue by SPEED that allowed candid Trackside comments made off-camera by Darrell Waltrip to be aired one time. That tape was quickly edited for the re-air and the original content was wiped off YouTube in a day. This (click here) is the TDP column on that incident.

Meanwhile, fans read that ten trucks (click here) might make the trip to California. Brian France boasted that fifteen new teams (click here) have brought COT cars to the R&D Center for approval, but The NASCAR Insiders say most of those teams are "one and done" efforts for Daytona only.

That same day, France announced (click here) a company-wide hiring freeze for NASCAR and all the companies it owns and operates. It also suspended financial bonuses for the top executives. Somehow, all of this never got mentioned on Preseason Thunder.

Friday, SPEEDtv.com unveiled a new column by John Roberts that took a nice big swing at those who dare to question the integrity of some NASCAR TV announcers. Well, apparently that would be the Internet site that you are reading right now. Why Roberts has made the transformation from TV host to columnist is a completely different issue.

Here is part of what he had to say:

Many bloggers have opined that guys like Ray Evernham, Brad Daugherty, Jeff Hammond and others are somehow biased announcers because of their ownership role but I couldn't disagree more. In fact, these professionals at times have gone out of their way to be unbiased. Naturally, there are times when they cannot discuss certain aspects of their businesses on the air and for that, they owe us no explanation.

Ray Evernham has a small interest in a race team, yet you can’t assign a value to his knowledge and experience. He revolutionized the crew chief position, won three championships and brought an entire manufacturer back into the sport, yet people say he’s biased or owes us some information he’s purportedly withholding. Come on, you’re not watching the same race we are.

What Roberts does in rather spectacular fashion is miss the point entirely. It is disclosure that fans want to keep the playing field level.

Veteran TV announcer Marty Reid stepped-in to anchor a single episode of NASCAR Now last season and before he asked ESPN studio analyst Boris Said the first question, he made sure TV viewers knew of Said's relationship with Jack Roush and that Said actually co-owned a Sprint Cup team. What Reid did was disclose the potential conflict before asking for an answer.

One of Robert's key points is that Ray Evernham is not to be questioned about his ownership role or the integrity of his comments as an ESPN analyst. As TDP has said many times, there is no doubt Evernham's history is amazing and his TV abilities are solid. But, writers like Jay Busbee (click here) have called the situation "ethically awkward" for a good reason.

ESPN avoided asking Evernham about issues connected with his Sprint Cup teams on-the-air. This was a decision made in advance and the network stuck to that all season long in 2008. What TDP has objected to is when current team owners get a free pass because of their TV role despite something happening in the sport that is directly connected to them.

This situation has also happened with Michael Waltrip and the old Inside NEXTEL Cup on SPEED. Now, the new host of the replacement program titled This Week in NASCAR is Steve Byrnes and he goes right after Waltrip when there is an issue with MWR.

Byrnes puts Waltrip right on the spot just like Reid did with Boris Said on NASCAR Now. There is a big difference between dealing honestly with NASCAR news issues and trying to hide them from the fans.

It seems ironic that Roberts would pick this weekend to raise the conflict of interest issue after what has to be two weeks of the most disappointing NASCAR TV coverage in years.

SPEED is alone on-the-air for one more week with Preseason Thunder before ESPN returns with the team of Mike Massaro, Nicole Manske, Allen Bestwick and Marty Smith to begin the daily NASCAR Now TV series.

With times tough and tempers tight, it is going to be interesting to watch how the TV analysts navigate through a sport in crisis. Evernham, Daugherty, Hammond, Rusty Wallace, Phil Parsons and Michael Waltrip will all return in 2009 as both TV announcers and NASCAR owners.

The Daly Planet welcomes comments from readers. Just click on the COMMENTS button below and follow the easy instructions. The rules for posting are located on the right side of the main page. Thank you for taking the time to stop by.
Posted by Daly Planet Editor at 2:30 PM 62 comments: