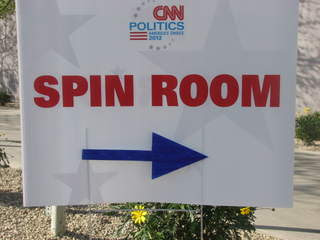 Update: The election is over, but the comments are still coming on NASCAR's new approach to controlling the content that is released in the media. Certainly been that way this week.

Originally published 11/5: It's that time of year. After a lot of money and a lot of talk, the race for President is about to be decided. Along the way, most Americans have been exposed to a whole lot of what the media calls "spin."

It is vitally important in today's political world to have a strong contingent of dedicated marketing professionals who only speak to designated points. What they address has been decided in advance and rarely reflects reality. That does not seem to be a problem.

The spin in the media at first is entertaining. It's fun to watch marketing types use catch phrases and talking points to try and influence opinion. Then, the backlash begins. Citizens without an agenda and with their own independent thoughts begin to bristle at being told what to think.

Now, with the Presidential election looming, a key issue is just how much damage the effort at spinning the truth has caused both candidates. Ultimately, each individual has their own perception of what reality is and a set of reasons for their own political views.

This year, we NASCAR fans have seen a shift to the same style of marketing from the sanctioning body. Instead of offering a realistic view of what is actually happening, the message being sent through a wide variety of media outlets is shaped and arranged in advance.

A key piece of this philosophy is to brand anyone who dares move off-message. Buzzwords like hater, complainer and the ultimate scarlet letter of being called anti-NASCAR are quickly thrown at anyone who steps out of line. From on-air personalities to amateur bloggers, anyone with media access is now under scrutiny.

NASCAR is actually constructing a "Fan and Media Engagement Center" in the Hall of Fame building that will continually scan the digital media world and work to influence conversations not in line with the talking points of the sanctioning body. Click here for the TDP post on that topic from July.

Anyone who doubts this can reflect on the published goals of NASCAR's Integrated Marketing Communications group. "The IMC will provide overall thought leadership in the communications space," said the sanctioning body's news release. Well, there is just one little problem.

In today's social media world NASCAR fans are free to voice their own views with the same level of exposure as media members, Sprint Cup Series drivers and even NASCAR executives. Platforms like Twitter and Facebook don't care who you are, they just post the content delivered by the user.

All of this has led to a very interesting dynamic that came to a head this Sunday during the race in Texas. The pre-race chatting on Twitter and Facebook quickly moved from cheering to downright surly once the race began. Following the postings to the #NASCAR hashtag on Twitter and the comments on NASCAR's Facebook page became an exercise in watching pent-up frustration boil over.

Some of the targets were familiar ones. Mysterious caution flags for debris where none was shown on TV. The dominance of Jimmie Johnson in a sport where cars are supposedly equal. The lack of passing when the cars were racing at speed. The frequency of TV commercials shown under green flag conditions and, of course, NASCAR's Chase playoff format.

What is perhaps important to keep in mind is that this is the time of the NASCAR season when the focus should be on the racing. Sunday, it was once again a race that looked a lot like practice. Single cars were spaced out and once in a great while, carefully passing each other. Pit stops and two-tire calls made for the only storylines until late in the event.

The problem is that none of this makes a dent in the marketing spin. What will be sent along through channels is the final lap mini-drama of two drivers actually racing. In a nutshell, that type of basic racing action is what NASCAR fans want to see throughout the race. It is what NASCAR and the tracks promote as being at the heart of the sport. This season, nothing could be further from the truth.

This week pay attention to what you hear on NASCAR's SiriusXM radio channel. Keep an eye on what topics are raised on SPEED's daily Race Hub show. Check Jayski's media links page and scan the headlines for the reality of what you saw on Sunday. It should be an interesting exercise.

Tackling issues head-on and getting public feedback was once said to be a priority. The NASCAR Fan Council was going to change the sport and opinions from the fan base were going to be the primary influence. It seems ironic that efforts this season are to control the message, spin the reality and slap a happy face on what so far is a sport desperately in need of fundamental change.

We welcome your opinion on this topic. Comments may be moderate prior to posting.
Posted by Daly Planet Editor at 7:00 AM 62 comments: