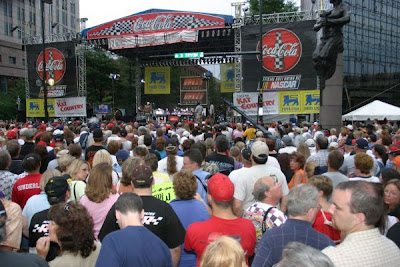 Friday night on SPEED is going to bring a unique mix of motorsports that NASCAR fans should enjoy. There will be a special version of Trackside first at 7PM Eastern Time and then three hours of coverage of the World of Outlaws Sprint Cars at the Lowe's Dirt Track.

Once of the big events surrounding the Coke 600 weekend is called Speed Street. Downtown Charlotte is set-up for a street festival complete with lots of bands and fun.

With all of the NASCAR news swirling around it should be interesting to see how host Steve Byrnes deals with playing to this rather massive crowd, many of whom may only be casual fans. Byrnes will be joined by Darrell Waltrip, Larry McReynolds and Jeff Hammond on the stage.

All four of these announcers have already been on-the-air for SPEED and relayed their views about Humpy Wheeler's "retirement." Friday night they will get a chance to speak about Bruton Smith's purchase of Kentucky Speedway and what role that may have had in the Wheeler situation.

It should be a fascinating night because added to the mix as a live guest on the show will be Michael Waltrip. Never shy in front of a crowd, Waltrip will no doubt be weighing-in on the topics of the day. What makes this even better is who Waltrip will be sharing the stage with.

ESPN's Rusty Wallace will also guest on the program. The dynamic of having two NASCAR team owners who are also high-profile announcers on different TV networks stop by Trackside should be interesting to watch. Rusty's son Steven will also be on the show.

The final confirmed guest at the time of this column is going to be David Stremme. He should have an interesting to story to tell about his last couple of months and what the future may hold for him as the silly season gets in full-swing a little early this year.

My personal note is for NASCAR fans who might not have seen the World of Outlaws Sprint Cars cars run on dirt. This is an amazing show that you should watch if you have the chance. The 800 horsepower of the winged sprint cars and the entirely different style of racing from pavement ovals is eye-opening.

The Dirt Track at Lowe's is a fast and exciting oval with normally great action. There will be lots of NASCAR drivers and owners also present as there is now a big cross-over between the two series. No doubt that in the three hours of coverage SPEED will work to include the NASCAR folks and allow them to talk about sprint car racing on dirt. It should be well worth the time to tune-in.

If you have comments about Trackside or the World of Outlaws special on SPEED, please feel free to post them here. To add your opinion, just click on the COMMENTS button below and follow the easy instructions. The rules for posting are located on the right side of the main page. Thanks again for stopping by.
Posted by Daly Planet Editor at 8:15 PM 22 comments:

This season, the NASCAR TV series Tradin' Paint on SPEED has been flying under-the-radar. Even an appearance by NASCAR Scene's Bob Pockrass could not raise a real issue that regular panelist Kyle Petty could get worked-up about.

This week, all that may change. Associated Press NASCAR reporter Jenna Fryer is coming back to the show and this time there are a whole lot of topics on the table to discuss. Although Fryer had been an guest earlier this season, the momentum of this show seems to build when there are issues happening in the sport that Petty feels strongly about. Humpy Wheeler is probably going to be one of those topics.

John Roberts hosts the program and had a tough time in Charlotte at the All-Star weekend where peace and tranquility seemed to be the theme of the show. When Roberts sticks to the topics picked by the Producer and allows the panelists to express their views, things happen. When he "guards" the show itself and becomes a "player" in the conversation, things do not.

It is certainly clear that the the old days of Petty losing his temper and literally yelling at the "media guest" are gone. Now, with a lot of TV time under his belt, Petty allows the guests to speak and address the topics head-on. This has proven to be much more effective in advancing his views and relating his opinion.

This program continues to be the only NASCAR TV show where a regularly scheduled discussion of NASCAR issues is permitted. The program either sinks or swims depending on what topics the Producer allows the panelists to discuss. Often, the most difficult part of Tradin' Paint is figuring out what not to talk about.

This program airs at Noon Eastern Time on Saturday. It will re-air at 1:30PM on Sunday afternoon. If you have not sampled this show, you may find it to be a refreshing change from the standard NASCAR TV fare. Roberts keeps things rolling and the thirty minutes goes-by in a flash. This episode should be interesting.

The Daly Planet welcomes comments from readers. Simply click on the COMMENTS button below and follow the easy directions. The rules for posting are on the right side of the main page. Thanks for taking the time to stop by.
Posted by Daly Planet Editor at 8:00 PM 19 comments: 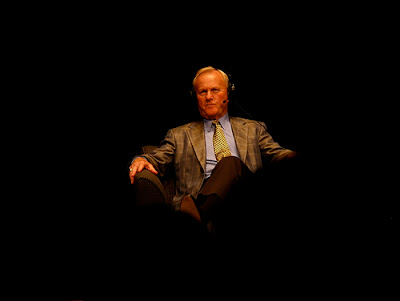 There are plenty of links currently on the Internet to the pending retirement of legendary NASCAR promoter and track president Humpy Wheeler. Below is the statement from the President of SPEED TV, Hunter Nickell.

“Over the last two decades, I made numerous trips to Humpy’s office seeking nothing more than a chance to bounce ideas off the man synonymous with free thinking and grand ideas. And, for me, it wasn’t just about coming up with the coolest ideas to promote the sport of NASCAR, it was about the enthusiasm and excitement Humpy generated around each one of them. I wish him well in his retirement, but certainly trust our relationship and mutual efforts to find the next big idea will continue for years to come.”

Over the years, I have known Mr. Wheeler and he is certainly a person who will be missed within the industry. I do hope that Mr. Nickell tries very hard to persuade Humpy to begin to contribute to both the TV and Internet sides of the NASCAR business. A good start would be to have Mr. Wheeler on Wind Tunnel after the Coke 600 from the track.

We are still awaiting an update on future episodes of The Humpy Show. The original airing was a pilot episode created by Humpy's daughter Patti, who is a NASCAR TV veteran. Maybe after his retirement, Mr. Wheeler will have some time to put into creating some memorable television programs.

If you have some memories or thoughts on Mr. Wheeler and his amazing shows at Lowe's Motor Speedway over the years, please feel free to post them. Just click on the COMMENTS button below and follow the easy instructions. Thanks.
Posted by Daly Planet Editor at 7:45 PM 14 comments: