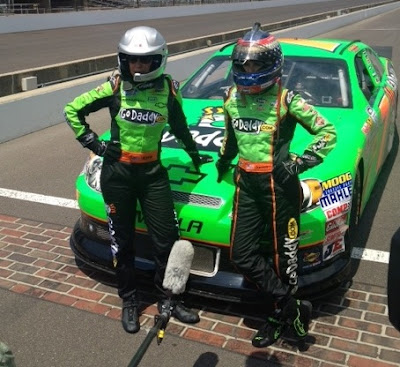 In order to prop-up sluggish ticket sales for the Brickyard 400 on Sunday, NASCAR moved the Saturday Nationwide Series race from the Lucas Oil Raceway short-track over to the Indianapolis Motor Speedway. Everything that is done today in the Nationwide Series is being promoted as "historic."

The bottom line is that the sport is in a crisis, despite the lack of media coverage on that topic. Nationwide Series qualifying just ended as this post is being created and it literally looked as if there was no one in the stands except the relatives of the drivers.

The myriad of issues that the Sprint Cup Series has encountered at the speedway runs from shredding tires to bad weather. As most fans know, the vast majority of the passing is done on pit road and the track is known for long green flag runs as drivers try to manage their cars until the closing fuel run.

In today's Nationwide Series race, the focus of attention will be on the seven Sprint Cup Series drivers that crossed-over to race on Saturday and one female driver who manipulates the media like no other. That is ABC journalist Katie Couric shown standing with Danica Patrick on the yard of bricks. Couric shot a feature that will be the centerpiece of the ESPN pre-race show.

The script that would most interest NASCAR, ESPN and the speedway is for Danica Patrick to get her first NASCAR win in the inaugural Nationwide Series race at the track. Patrick qualified 20th, three spots behind 18 year-old driver Johanna Long, who is also in her rookie year in the Nationwide Series.

Marty Reid will call the race with Dale Jarrett and Andy Petree. Reid will call all the Nationwide Series races for ESPN again this season. Jamie Little is off, so Mike Massaro will be joining Dr. Jerry Punch, Dave Burns and Vince Welch on pit road.

As we mentioned several weeks ago, ESPN has dropped Tim Brewer and parked the Tech Garage. Although disputing that he is gone for good, the network has no plans for us to see Brewer pointing at car parts this season during the Chase. Brewer is a colorful personality, but there was just no room for him in the telecasts down the stretch.

Nicole Briscoe has Rusty Wallace and Brad Daugherty with her from the Infield Pit Studio. This trio has a short pre-race show of thirty minutes and then may be left with little to do if the race settles into long green flag runs. Briscoe has proven to be very capable of dealing with a wide variety of circumstances in a live setting.

The Nationwide Series race is a calculated gamble for NASCAR. The series is not very deep and is normally dominated by the Sprint Cup Series drivers in the field during companion events. That was one of the best parts of having the race at Lucas Oil Raceway. It limited the number of drivers who wanted to do both events.

We are going to open comments on the TV presentation of the race today and live blog during the event. There has been lots of feedback that with the Olympics in progress and the small amount of tickets pre-sold for the race it could be a rough outing. The flipside is Danica could win, the sport would get a ton of buzz and the powers that be could be smiling from ear to ear. Pre-race at 4 and racing at 4:30PM on ESPN.
Posted by Daly Planet Editor at 3:33 PM 146 comments: