They are, however, vigilant to the second where use of NASCAR footage on TV is concerned. One phone call from NASCAR and some TV station or producer is given the choice of writing a check or heading for court. But, for some reason, anyone can use the NASCAR logo and even post race footage with audio on the Internet with absolutely no problem.

What Internet users can also do is say almost anything without expecting a response from NASCAR. The primary reason would be that NASCAR is not in the Internet business at all. NASCAR.com is a licensed property run by the Turner Interactive group out of Atlanta, GA. It is what is often called a "third party" website.

The number one email question sent to TDP is how can a fan send an email to NASCAR? The answer was addressed in this column (click here) and told the tale of an organization that refuses to directly engage their own consumers.

While this lack of direct Internet communication had done nothing more harmful than glut the market with NASCAR video and commentary sites, the situation has now changed in a hurry. One network TV switch from ABC to ESPN2 of a race in-progress has caused an Internet snowball that is still heading downhill and picking up steam.

Perhaps, it is the frustration of two years of basically crummy Chase for the Championship coverage by the hype-driven NASCAR on ESPN gang. Perhaps, it is the late start times and the fact that so many fans now record the races for later viewing. Whatever the situation, the story of ABC's "big switch" has gone viral and is now an Internet sensation.

My late friend Scotty Connal was smack dab in the middle of NBC's decision to remove a live NFL football game from the air to start the movie "Heidi." What ABC and ESPN did was nothing even close to that move and yet the "Heidi" incident from decades ago has been compared endlessly on the Internet to the Phoenix network switch.

Amateur websites with official-looking NASCAR logos are talking openly about ESPN being dropped from the TV contract for next season. Well, that would be news to NASCAR and ESPN. Others are talking about Brian France being outraged at the TV network. Well, that was not what I heard from Mr. France on the NASCAR teleconference. Disappointment and outrage are two very different things.

Viral is a term for a story or video that crisscrosses the Internet growing larger and larger with every listing, posting and re-write. Now, the ABC switch had been tied to everything from lack of respect for the sport to the ABC executives not being NASCAR fans.

The way to stop this is simple. Offer direct interaction with the fans and continue to apologize and explain. The only problem is NASCAR has nowhere to do that. They have no TV network, no website of their own and no daily podcast. The don't even have a little free Google blog like this one.

The only story at NASCAR.com uses Mr. France's quotes and then links to the full transcript of his teleconference. There are no comments allowed on the story page. Checking the ESPN.com NASCAR homepage results in no mention of "the big switch" at all.

Hopefully, over the off-season NASCAR will have a nice big meeting and re-direct its Internet philosophy. Developing a way to communicate directly with the fans through an Internet destination is going to be key to helping the sport through 2009.

This effort will not interfere with the Turner operation and will not detract from the fine video work of The NASCAR Media Group. What it must do, however, is build a bridge to the disenfranchised fans who may just need that personal touch to continue to devote 38 weekends a year to NASCAR on TV.

The Daly Planet welcomes comments from readers. Just click on the COMMENTS button below and follow the easy instructions. The rules for posting are located on the right side of the main page. Thank you for taking the time to stop by.
Posted by Daly Planet Editor at 8:30 PM 36 comments: 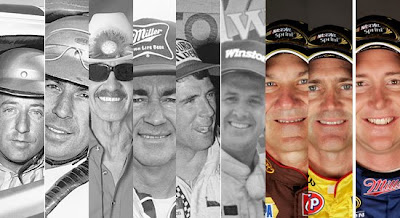 The official festivities and the first on-track action both get underway from the South Florida area on Thursday.

NASCAR is hosting a luncheon and informal press conference with past and present champions at the Hyatt Regency Coral Gables at 1PM Eastern Time. Steve Byrnes will be there live on SPEED for a full hour of interviews. That is a composite picture of some of those attending above.

Past champions include Ned Jarrett, Richard Petty, Bobby Allison and Rex White. More current stars include Kurt Busch, Bobby Labonte, Dale Jarrett and Rusty Wallace. NASCAR on Fox's Darrell Waltrip will also be on hand, so Byrnes better be prepared. Waltrip has been off the air for months now.

Ryan Burr and the NASCAR Now gang have another one hour Championship Week show at 5PM. They are going to continue to follow the breaking stories about historic mergers in the sport as they happen and the resulting changes in team personnel. There seems to be breaking news almost every day this week.

Then, SPEED will present Craftsman Truck practice at 7PM with Rick Allen and Phil Parsons for an hour from the Homestead Miami Speedway.

The second special of the day will be an 8PM Thursday edition of This Week In NASCAR. Once again Mr. Byrnes will be the host with Chad Knaus and Michael Waltrip as his panelists. This time, the show will actually have live guests.

It should be interesting as SPEED has all kinds of Sprint Cup, Nationwide and Craftsman Truck Series championship contenders on the list to stop by. Perhaps, this should have been a two hour show. It might be nice for veteran fans to see Johnny Benson on this program one last time.

All of the Thursday NASCAR TV shows bear watching or at least recording. SPEED gets credit for stepping-up to televise the media event in the afternoon and for originating a special to promote the championships. It will also be nice to see the first wheels turned on the Homestead track.

NASCAR Now has Marty Smith in Florida and he has been chasing both the merger news and the championship contenders. Wednesday he had a good interview with Jimmy Johnson and repeated a wonderful video profile of this young Californian. The biggest news of the week is that ESPN let Smith on the air without a tie on Tuesday. That experiment was over by Wednesday. Some things never change.

This post will serve to host your comments about the Thursday NASCAR TV shows.

Thanks to Racingone.com and Getty Images for the picture at the top of the story.

The Daly Planet welcomes comments from readers. Simply click on the COMMENTS button below and follow the easy instructions. The rules for posting are located on the right side of the main page. Thanks for taking the time to stop by.
Posted by Daly Planet Editor at 8:15 PM 9 comments: