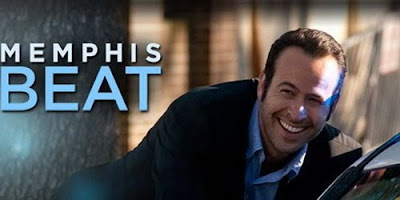 It's going to take someone with a very good sense of humor to figure out the TNT coverage of the Sprint Cup Series race from Pocono. Detective Dwight Hendricks loves Memphis, his mother and singing the blues. He also uses his positive attitude to get through tough situations. Pocono was tough.

The TNT team broke-out all the bells and whistles for this race. RaceBuddy was online and for the first time available on iPad and iPhone. The TV commentary track was offered online along with four in-car cameras, two battle cams and a lot more. They would need it all.

The race unfolded after a foggy morning with the one hour Countdown to Green show. Lindsay Czarniak hosted Kyle Petty and Larry McReynolds from the TNT infield rig in the windy and cool weather. The show featured opinions, interviews and a feature on the late crew chief Harry Hyde.

Adam Alexander is in season two of his job as play-by-play announcer for the TNT races. Petty and Wally Dallenbach join Alexander for the telecasts. Pocono is a huge challenge for the PXP person due to the long green flag runs and the relative lack of passing.

Ultimately, the only way to make Pocono interesting is to continually update all the race strategies and go through the field. TNT does not use the "hyper-tight" coverage philosophy of FOX and the result was a very different looking telecast. Wideshots for perspective were mixed with close-ups that were selected for a reason.

The telecast viewed with RaceBuddy made for compelling video, especially with the fact that RaceBuddy continued without commercial breaks. Watching the telecast alone told the classic story of Pocono. Engine woes, big speeds and little passing.

TNT does "through the field" rundowns that give fans information on drivers and teams that have perhaps not been up front or in the TV coverage. It's a nice touch and a welcome addition after the reality of FOX and the lack of available information from those telecasts.

The upper-screen scoring ticker for TNT still has the team colors and numbers, but the names of the drivers can be clearly seen in black and white, literally. The ticker moves at a quick clip and additional graphics are often added to it, expanding the available information.

TNT runs a lot more split-screens, but seems unable to put McReynolds in that effect when he is updating on-camera during the race. It's more important than ever to keep green flag racing on the TV screen, so perhaps McReynolds might find himself sharing the screen for the remaining five races.

After leaving the race due to engine failure, Carl Edwards joined Czarniak and McReynolds in the tiny TNT studio used when rain is pending. Edwards even brought his failed engine part and had a brief conversation that detailed his issues. Then, Edwards stayed and continued to comment during the telecast.

As usual with Pocono, the racing action picked up late in the race. TNT continued to keep the focus on the racing action with Petty taking the lead on the race commentary. In this first race of the TNT package, McReynolds had a much smaller role and was not in the mix on strategy issues.

This post will serve to host your comments on the TNT coverage of the Sprint Cup Series race from Pocono Raceway. To add your TV-related comments, just click on the comments button below. This is a family-friendly website, please keep that in mind when posting. Thank you for stopping by. 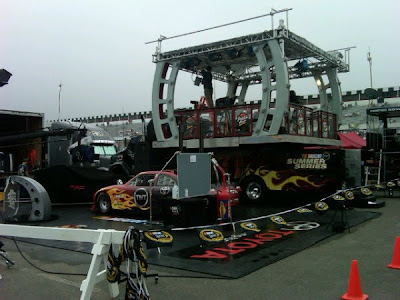 It's a foggy morning at Pocono Raceway. The forecast is calling for rain this afternoon and everyone is hoping to get this race in as scheduled.

This is the 2011 debut of Lindsay Czarniak as the host of the six TNT summer race telecasts. She will handle the pre-race with Larry McReynolds and Kyle Petty to get things started. She then remains either on the outside TNT infield rig or moves to an indoor location with McReynolds in tow should the rain begin.

Adam Alexander is in his second season as the play-by-play announcer for this package. He was a surprising choice, but TNT liked his rookie effort and brought him back for this season. Alexander has spent the last four months as the solo anchor of Speed Center on SPEED.

The pairing of Kyle Petty and Wally Dallenbach is interesting in that the opinions and analysis related to the TV viewers are those of two former drivers. The classic approach of having a former crew chief paired in the booth was never embraced by TNT. The network is fine with having McReynolds positioned in the infield and ready to provide comments from that location.

What you get with Petty and Dallenbach is two drivers who never fit the NASCAR mold. Petty moved on after an up and down career that drew to a close after the tragic passing of his son in a race car. Dallenbach never caught on in NASCAR, despite bringing his colorful personality and strong family background in racing.

Phil Parsons is not returning to TNT as a pit reporter. It will be TV veteran Chris Neville replacing him. The other three members of the pit road gang are Matt Yocum, Marty Snider and Ralph Sheheen. It was Sheheen who filled in upstairs after Bill Weber was fired mid-season several years ago.

This TNT package will feature an expanded online RaceBuddy application available through the NASCAR.com website. This season there are two mosaic (four camera) views, four in-car cameras and two battle-cams. It's a great idea and one that has clearly struck a positive nerve with the fans.

The TNT races will not feature side-by-side commercial breaks. The Daytona event will be produced with the "Wide Open" coverage, but expect the normal commercial and promo load in the telecasts that we have come to expect from TNT since 2007.

After the FOX events, TNT is always a nice breath of fresh air. RaceBuddy lets fans see the racing during the commercials, Petty is a strong presence in the booth and Czarniak is a TV pro.

This post will serve to host your comments on the TNT coverage of the Sprint Cup Series race from the Pocono Raceway. To add your opinion, just click on the comments button below. This is a family-friendly website, please keep that in mind when posting. Thanks for taking the time to stop by.