Familiar Topic: A Sport Or A Show? 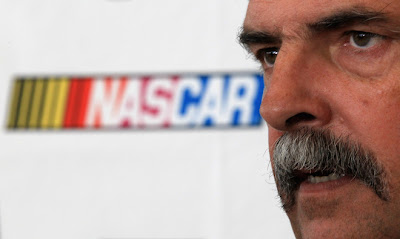 A common theme of the fan comments on the Chase for the Championship has been the caution flags displayed by NASCAR without an accident, rain or fluid on the track. Once again this season the debris caution is on the minds of the fans.

Since 2007 and the start of this blog, it has been a topic visited several times. The issue always comes back to one burning question. Is NASCAR ultimately a true sport or just a show for the fans and TV viewers? There are strong supporters on both sides of the topic.

The Chicagoland race was a rough one for me. Debris cautions that were never paid off by the TV team in terms of showing the offending item were just tough to take. One one side, NASCAR is clearly handcuffed this season in terms of the lack of racing action on many tracks.

Click here to read a TDP post from 2010 where multi-car Sprint Cup Series team owner Michael Waltrip talks about an idea he has for closing up the racing action on the tracks. His comments came after a late caution flag for debris in a race at MIS.

Waltrip's comments drive home the point that the racing dynamic is very different than most sports because of the inability to stop the action. Sports like tennis and baseball contain natural breaks in the action, while NFL football is built around a made-for-TV commercial format disguised as four quarters of action.

SB Nation NASCAR reporter Jeff Gluck addressed the issue in May and featured comments from NASCAR VP of Competition Robin Pemberton. He was responding to a controversy after a late race questionable caution thrown at Richmond that basically cost Tony Stewart a win.

Click here for the full SB Nation story. Here is an excerpt:

"Sometimes, some people are a little more needy than others and they want to see that for whatever reason," Pemberton told reporters attending a function at Charlotte Motor Speedway. "And whatever their thought process and beliefs with the governing body (are), they think they need proof.

But Pemberton said he doesn't mind TV not showing the reason for debris caution because, "I don't have an issue with (the reason for the caution)."

He also said NASCAR does not keep the debris as evidence of why it called the caution.

"We don't inventory it, we don't tag it and put it a library anywhere or anything," he said. "It's just trash."

Ultimately, the man pictured above is responsible for the officiating in the sport. The calls of his staff shape the event when a caution is waved and fans start searching for the reason why.

Click here for a good read from Jeff Owens at The Sporting News on this topic. Here is an excerpt:

The problem is that it’s not fair to the competition on the track—namely the leader—and it looks bad, damaging the sport’s credibility. Throwing a phantom caution is like an umpire suddenly shrinking the strike zone to make a baseball game move along faster, or football referees ignoring pass interference to create more offense and make the game more exciting.

Manipulating the competition to produce a better show is crossing the line between sports and theatrics, making games a bit too much like professional wrestling (for which, ironically, Stewart once got into trouble for comparing NASCAR to).

But NASCAR can’t get itself into a position where its credibility is constantly questioned because of an overabundance of debris cautions. What it must figure out is why there has been a decline in close racing, leading to fewer natural cautions and taking away from the excitement of close competition. If it can solve that dilemma, there won’t be a need for questionable caution flags.

As the Sprint Cup Series heads to Phoenix, this issue will once again be in the spotlight. Stewart's issue at Richmond where a late caution was thrown seemingly to bunch the field up for the finish proved that it's not only the 1.5 mile tracks where this happens.

The sport is looking for some drama, more storylines and better competition this weekend. It should be interesting to see if the selective use of the caution flag becomes a tool to accomplish this goal.

We welcome your opinion on this topic. Comments may be moderated prior to posting.
Posted by Daly Planet Editor at 9:00 PM 43 comments: