Live Blogging The Sprint Cup Series On TNT From Chicagoland 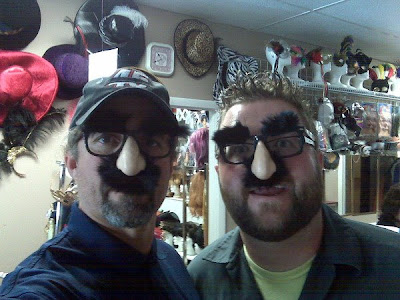 The final chapter in the six race story of NASCAR on TNT is about to play out. As you can see from the picture above, what TNT has brought to the past five races has simply been fun.

Marc Fein leads Kyle Petty and Larry McReynolds on the air at 6:30PM with the NASCAR on TNT Live show. Guests on the TNT infield stage will include Jeff Gordon and Carl Edwards. The outstanding Pride of NASCAR feature continues with a profile of Fred Lorenzen. TNT's commitment to spending the time and effort on producing these features has been welcome in the current NASCAR TV environment.

At long last, Ralph Sheheen will present his sneak peek inside the amazing car collection of veteran NASCAR owner Jack Roush. Many fans still do not know the extensive racing history of this man that includes NHRA and sports car racing championships.

The Countdown to Green show is up next, where Fein speaks with the TNT race analysts Wally Dallenbach and Petty. In this program, Marty Snider gets a tour of downtown Chicago from Kurt Busch, who knows the city very well. Also, the final edition of Wally's World airs featuring a review of this wide and fast racetrack.

Once 8PM rolls around, it will be Sheheen teaming up with Petty and Dallenbach to call the race. McReynolds stays in the infield to offer strategy advice. On pit road will be Lindsay Czarniak, Matt Yocum, Adam Alexander and Snider. This group has worked quite well together, including the versatile Czarniak who only appears on the NASCAR circuit for the six TNT events.

Green flag is at 8:15PM and look for NBC's Jimmy Fallon to be a part of the opening festivities. He has been touring the garages and talking on Twitter about the excitement of being at his first NASCAR race.

TNT has been welcomed by fans because of the relaxed style of coverage that has several features. Director Mike Wells keeps the cameras wide and always lets viewers keep a perspective of where a car is on the track. The caution flag pitstops are always followed with a clear view of the cars racing off pit road and a pop-up graphic that lets viewers know who came out where in the order.

Sheheen lets Petty and Dallenbach have the spotlight while the pit reporters offer information without hype or exaggeration. It is a combination of announcers that simply works on the air. This season will be remembered for Sheheen's willingness to step-in and take the play-by-play role when TNT and Bill Weber parted ways during the telecast schedule.

This post will serve to host your comments about the final Sprint Cup Series race on TNT for 2009. To add your TV-related opinion, just click on the comments button below. This is a family-friendly website, please keep that in mind when posting.

Thank you for taking time from your weekend to stop by The Daly Planet.
Posted by Daly Planet Editor at 5:26 PM 462 comments: