NASCAR Now: ESPN Without A Parachute 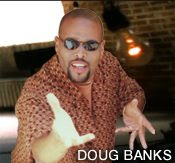 Several times over the last few weeks, the NASCAR Now set has been vacant except for the host. Today, Doug Banks found himself in that position with a lot of racing news and information to pass along. Unfortunately, Mr. Banks is a talented hip-hop "urban DJ" with a national radio show...but not one ounce of NASCAR experience. It seems strange then, that ESPN would put him in the position of shouldering the burden of their flagship NASCAR show all alone.

Logic aside, Banks took the challenge and waded into a program deep in tech talk and racing issues. ESPN has moved to an entirely scripted program in order to help Banks, and it really takes the life out of a show like this. Its one thing if Banks is just reading a script over some highlight video, but interviews are just brutal. And who should show up as the first interview but Jimmy Johnson.

Unfortunately, Banks had to read each and every question word-for-word to Johnson in a painful display of NASCAR Now's credibility gap. When Banks was forced off the script by Johnson, he could not even begin to remember how to "talk NASCAR." This interview had all the excitement of a legal deposition.

Then, the legendary Ricky Carmichael stopped by to check-in after his recent stock car debut. Mark Martin is helping Carmichael develop his oval track skills, and Ricky's debut was a little less than stellar. It appeared that not only did host Doug Banks not know exactly what happened in the race, he also did not know the magnitude of Ricky's motorcycle career. About halfway through the interview, Carmichael began "helping" Banks understand that he was just a little more than a good "dirt bike rider." "I've been a racer since I was five...I won the (national) championship ten years in a row." It didn't help. Finally, as if NASCAR Now could not dig itself any deeper, Banks asked Carmichael about the fact that he and his wife just had twins. "Getting any sleep?" said Banks. To which Carmichael replied, the twins were born a couple of weeks early and they are still in the hospital. Tasteless and ill-informed on ESPN's part.

Finally, Marty Smith and Terry Blount appeared on video to respond to several scripted questions by Banks about news items. Even during this discussion, which could not be totally scripted, Banks was lost. He does not know the NASCAR officials and racing names the reporters use, and quickly exits the interviews as soon as possible...as if relieved.

ESPN has the perfect right to craft this program series anyway they want. They have the perfect right to use any on-air talent they choose, and feature any content they select. Several ESPN executives have been critical of my columns, because I am not sensitive to the "learning curve" that ESPN2 is going through. As a former ten year ESPN employee...I appreciate the spin, but I am not buying it. Not for one long network second.

ESPN and ABC had plenty of time to ramp-up and rehearse this effort long before they unleashed Erik Kuselias and Doug Banks as the new faces of NASCAR to the nation. Now, they are behind the 8-ball and having no luck in digging themselves out. Its time for a change. This is only the tip of the NASCAR iceberg. By the time July rolls around, there will be three or four times the information and news stories going on than there are now.

NASCAR itself cannot be pleased with this freshman effort from their brand new major TV partner. This is their face ESPN is putting forward, and the sport is taking it right on the chin. ESPN's coverage of the racing is great, and the at-track news programs have been professional and interesting. What happened in the studio? Wrong people? Wrong location? We all have situations in our lives that do not work out the first time. In order to make them work, we change them. Let me say that again....in order to make them work, we change them.
Posted by Daly Planet Editor at 9:13 PM

Please don't let this headline leave you scratching your head. While it is true that NASCAR events have practice, qualifying, and racing covered live, one other thing is also true. ESPN2 and SPEED Channel are struggling with the Monday through Friday balance of programming for the sport.

On Mondays, the racing world catches its collective breath and takes a look back at a weekend of on-track activity. SPEED used to offer a multi-hour block on Monday Nights anchored by Inside NEXTEL Cup Racing. Now, all of the shows other than INCR are gone. The day after a NASCAR weekend, fans get one hour of tired highlights with three tired drivers...and that's it.

ESPN2 comes with NASCAR Now, a thirty minute studio show based at ESPN's headquarters in Bristol, CT. From the beginning, this show has disappointed. In my conversations and emails with reporters, columnists, and fans the same sentiment is echoed over-and-over again. They just don't get it.

There are two central elements that have been missing from both ESPN and SPEED's Monday through Friday NASCAR TV coverage. The first is follow-up. NASCAR leaves a mountain of stories on the table as the cars cross the finish line of each race. This is the reason The Daly Planet has been so vocal about the TV networks showing the finish of all drivers. The story of this sport is not the winner of the race, and both SPEED and ESPN have forgotten that. It is time to follow-up on all the "stories" of the race, throughout the field.

The second missing element is the fans. What happened to their voice? SPEED Channel shows fans on camera briefly, but only allows selected calls on one hour of WindTunnel each week. ESPN avoids fans like the plague, and started the season with Brent Musburger in the "Fan Zone" at Daytona...with the fans standing a safe distance away behind a rope. Nice touch.

This sport is a dialogue, and the conversation begins at the end of each race. Tony Stewart, Matt Yocum, and all the other radio show hosts are laughing out loud at SPEED and ESPN. How is it possible that NASCAR radio is alive and well during the week and NASCAR TV is a wasteland? Even as SPEED continues to bring us more "lifestyle" programming like Pinks, Unique Whips, and SuperBikes, NASCAR radio is blazing ahead at full speed. The recently added "SPEED Road Tour Challenge" is no more than a poorly done MTV clone. SPEED has created and then cancelled over ten NASCAR shows in the last several years. Remember NASCAR Nation with Leanne Tweeden?

Give Dave Despain a break, move him off INCR and let him host a two hour Monday Night WindTunnel that is strictly NASCAR-themed. Place it after Inside NEXTEL Cup Racing, so that the highlights of all two or three races over the weekend would already be done. Despain is great at letting fans talk, but the Sunday WindTunnel is a swirl of motorsports, and NASCAR is not the theme. SPEED needs to understand that the fans are already interacting with broadcast and satellite radio, posting to websites, and putting their videos on the net. All of these elements should be incorporated into this show, and it should embrace the new technologies that both SPEED and NASCAR Images have been avoiding. Its called a multi-media platform.

On the ESPN side, there is no doubt that NASCAR Now needs to move to the Mooresville, NC area. Just as ESPN originally discovered with RPM2Nite, there is no credibility to using Bristol, CT staffers for a sport that lives in one geographic area of the country...just go there. With ESPN making a major multi-year commitment to the sport, its time to extend that commitment into a studio presence in the area. Life would be a lot easier for NASCAR Now if drivers could literally just "stop by" for an interview. In addition, the synergy of a Mooresville headquarters would spread out through the other ESPN networks and technology applications like Jayski.com. The availability of information and content would be exactly what NASCAR Now needs to right itself.

I know its hard to comprehend, but ESPN is in trouble. NASCAR could be one of the key elements that helps to end this slump. The recent failures of technology applications like ESPN Mobile, the essential shuttering of ESPN Classic, and the mess at ESPN.com have taken the wind out of this group's sails. They are losing the BASS war, have their own ESPN News taking a bite out of SportsCenter, and ESPN 360 is still without focus. Step up to the plate, invest in NASCAR, and watch the fans return to the ESPN family as quickly as they left. Our memories of John Kernan have not yet faded.
Posted by Daly Planet Editor at 8:54 AM