Your Turn: Sprint Cup Series From Texas on ABC 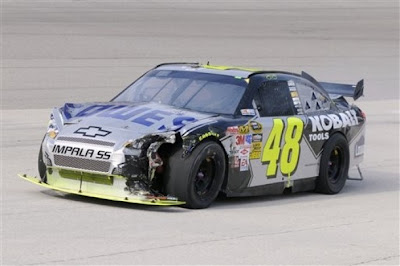 The NASCAR on ESPN team produced the Sunday afternoon TV coverage of the Sprint Cup Series race from the Texas Motor Speedway on ABC.

Allen Bestwick started the day with NASCAR Countdown. This was the pre-race show that also featured Brad Daugherty and Rusty Wallace. It included a musical number from ZZ Top and a feature that had Daugherty talking about food.

The race coverage was provided by Jerry Punch. He called the play-by-play for the entire event. Dale Jarrett and Andy Petree were the two race analysts. Tim Brewer was in the Tech Garage.

The pit reporters for this event were Jamie Little, Shannon Spake, Dave Burns and Vince Welch.

This post is an opportunity for you to offer comments about the TV coverage of the race. This is the third season of ESPN covering the Chase.

These fans comments on the Cup races are the most viewed posts on TDP. Lots of NASCAR, media and TV folks will be reviewing your comments, so keep them focused and make them count. This is a family-friendly website, please keep that in mind when posting and thanks for taking the time to stop by.
Posted by Daly Planet Editor at 12:05 AM 160 comments: