TV's Rock And A Hard Place 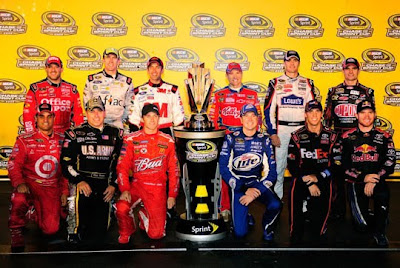 Well, this is it. Probably the final time for the 2009 season that we will state the case of why ESPN, The Chase and NASCAR fans are just not getting along.

"TV Troubles With Chase Easy To Understand" was TDP's column back in mid-October on this issue. Click the title to read it and make sure to scan the fan comments. They tell the true tale of the struggles with this format and getting it to translate to the TV screen.

The Fox and TNT networks have a distinct advantage in the Sprint Cup Series coverage they produce. There is no Chase, so each network is free to simply tell the story of the race and follow the action on the track. They have a single storyline to follow.

Since ESPN returned to the sport, this last issue has been both the biggest challenge and the network's biggest frustration. Fans wearing Joey Logano, Matt Kenseth or Michael Waltrip gear are almost certain not to see these drivers unless they challenge for the lead or crash. Non-Chase drivers disappear when the playoffs begin and stay out of sight.

That is not what Brian France had in mind when he created the Chase. He was simply trying to put an additional spark in a sport that lost some of the national spotlight when the NFL began play. Over the last three seasons, that has not happened.

ESPN has been between a rock and a hard place and the results have been rough. The network puts the Chasers first, the race leaders second and the fans third. Rather than setting the points before the event and offering normal race coverage, ESPN skews the entire race telecast toward offering live electronic updates of the Chase points at that moment.

The problem is that this is motorsports. Bill Elliott had a commanding lead one year in Homestead only to blow a tire on the final lap. This reality shows just how ridiculous the entire "championship points right now" scenario really is on TV. Other than the final race, it makes absolutely no sense in the live racing coverage.

The key agenda of any primary sponsor on a Sprint Cup Series team is to get TV time for the car and driver. During the Chase, cars in the lead group that are non-Chasers can expect lip service at best. The agenda is Chase first and race second. How many times during this Chase have drivers cracked the top ten in a race and never been mentioned?

The foundation of the sport is the fans in their t-shirts and hats who are rooting for one team and have been doing so since February. Many have been pulling for the same driver for years. The most frequently received email at TDP is from fans who watched an entire race and are upset their driver was never updated by ESPN. How does that happen, they ask.

TV coverage has added a silent ticker that scrolls the positions of the drivers. Sometimes, it adds other information in regard to time behind the leader or laps down to the field. That software does not tell the loyal fans of Kenseth, Logano or Waltrip what happened to their driver after the green flag fell.

ESPN has used this technology as a crutch to prop-up its refusal to reset the field after cautions or at regular intervals under green. The only thing updated is the Chasers.

So, the now familiar pre-Homestead discussion has come around once again. What can ESPN do to change this downward spiral of fans of non-Chase drivers walking away once NFL football begins? The answer goes right back to the fans.

Have you ever watched a race on TV with the sound turned down and listened to the radio broadcast at the same time?

In a typical season, how many races do you watch on TV with the sound turned down while listening to the radio broadcast?

Why do you watch the race on TV with the sound turned down while listening to the radio broadcast?

Those questions relate to something NASCAR fans have known for years. It is a formula used by both of the radio networks that cover the sport. Once the race begins the priorities are to call the most exciting races on the track regardless of position, update every car on the track as often as possible and then let the Chase implications come into play as the drama of the post-race.

The only way to keep all the fans watching and listening on TV is to prioritize the excitement of racing for position. Then a fan's favorite driver may pop up at any time while trying hard to get a top ten or even a top twenty position.

With Chasers and race leaders now totally dominating the audio and video portions of the Sprint Cup Series TV coverage, fans leave simply because their driver does not fit into either category. The bottom line is that what kept fans coming back is now gone; that is the fact that every Sprint Cup Series driver will be treated equally on TV.

How many of the nine Chase races did you watch? Did you leave because of other sports, turn on the radio to hear driver updates or multi-task online? If your driver is a Chaser, what did you think of the focus on only those 12 cars?

This post is not about the Chase itself, the COT or any other internal NASCAR issue. Just like the Fan Council, we are trying to get a feel before this final race of what fans think at this moment about the TV coverage. ESPN has spent hundreds of millions of dollars on this product and the results have not been what the network expected.

To add your opinion on this topic specifically, just click on the comments button below. There is nothing to join and we do not need your email. We just want your opinion. This is a family-friendly website, please keep that in mind when posting. Comments in this forum may be moderated.

Thank you for taking the time to stop by and share your NASCAR TV opinions with us.
Posted by Daly Planet Editor at 10:30 PM 69 comments:

Your Turn: Sprint Cup Series From Phoenix On ABC 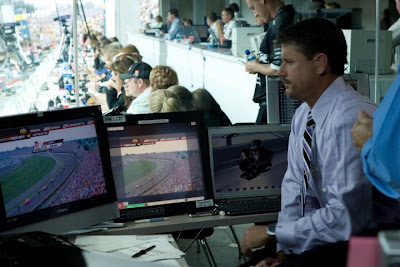 We are finally at that point. This column signals the next-to-last time that you will be able to offer your honest opinions about the TV coverage of the Sprint Cup Series. This time, the race is from Phoenix and the TV network is ABC.

Allen Bestwick started the day with NASCAR Countdown. He was joined by Rusty Wallace, Brad Daugherty and Ray Evernham. The show recapped the Chase and profiled Mark Martin. It did not touch on the Keselowski vs. Hamlin issue from Saturday.

Evernham was a late add to the panel and was on both the Saturday Nationwide and the Sunday Sprint Cup Series races. No idea why the network put him on this show.

Jerry Punch called the race with Dale Jarrett and Andy Petree in the broadcast booth. Down on pit road were Shannon Spake, Jamie Little, Vince Welch and Dave Burns. Tim Brewer was in the Tech Garage.

PIR was a race that put Jimmie Johnson and his #48 team in the spotlight. ESPN responded by theming the race coverage around Johnson, who helped by leading a significant part of the race. Cautions were few and the driving was clean.

Pictures were good, audio was solid and once again there were no technical issues with the telecast. This has been a very good area of improvement for ESPN this season.

If you would take a moment to offer your opinions on this telecast, we would appreciate it. These comments are read by many people during the week. To add your opinion, just click on the comments button below. Thanks for stopping by, I know it has been a long season.
Posted by Daly Planet Editor at 12:05 AM 98 comments: